Despite doubts over ZBB, shareholders are demanding higher profit margins, says the president for business intelligence at Group M.

Miracle Max: "Look who knows so much. Well, it just so happens that your friend here is only mostly dead. There's a big difference between mostly dead and all dead… Now, mostly dead is slightly alive. Now, all dead... well, with all dead, there's usually only one thing that you can do."

Max: "Go through his clothes and look for loose change."

(Dialogue from The Princess Bride)

Kraft Heinz’s recent quarterly financial results, when the company wrote down the value of some of its brands, sparked industry discussion about the consequences of zero-based budgeting for brands and their owners.

For the marketing function and product development more generally, the rise of ZBB in the FMCG sector was ill timed.

It coincided with a period of pronounced change: the rise of direct-to-consumer brands as well as small, mid-sized and private label brands, the rise of ecommerce sales and other long-term challenges for incumbents.

Had they been better positioned to invest in activities connected to longer-term payoffs, FMCG incumbents might have maintained the growth demanded by their stakeholders.

To an extent, what happened with Kraft Heinz diminishes the credibility of 3G and ZBB.

It should decrease the threat to other brands that activist investors will take over to pursue similar paths.

However, this doesn’t mean efforts to reduce costs will abate.

In fact, looking at analysts’ estimates for seven of the largest companies in the sector, whose combined revenues equated to $416bn in 2018 with $105bn of EBITDA, we see consensus expectations still call for more than 100 basis points (or 1.00%) of margin improvement between 2018 and 2021.

So cost pressures will remain in the system, likely much as before. And marketers still have difficulty demonstrating the value of advertising – despite its importance in building long-term stakeholder value.

Looking at a similar group of companies, who disclose advertising spending (or a near-proxy) and organic revenue consistently from 2012 through 2018, and comparing the shift of revenue percentages allocated to advertising and organic growth, it is difficult to find unambiguous connections between ad spending and near-term (same year) growth at a company-wide, global level.

Interestingly, lagging the data by a year produces a worse outcome, in this instance, with effectively no correlation (R2=0.00). 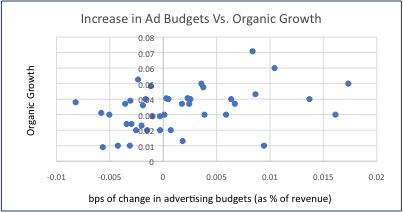 While noise in this analysis (absence of comparative data on spending at the brand and country levels and comparing trends across multiple companies) may be responsible for the inconclusive outcome, practitioners are likely all too familiar with instances where every one of a marketer’s campaigns produced quantifiably high ROI while actual sales fell.

The truth, on a short-term basis, may very well be only as modestly positive as the data here suggests.

With margin expansion goals likely to remain a key objective for most of the world’s largest marketers, efforts to cut costs not clearly connected to near-term revenue growth will probably remain much as they ever were, even if under a name that differs from ZBB.

ZBB always was intended to produce a desirable outcome for shareholders, their companies and, arguably, society, too.

Ideally, it would result in more efficient enterprises and free capital for deployment back to shareholders and investment elsewhere, or reinvestment back into the business.

When day-to-day decision-makers are deterred from pursuing strategies benefitting their companies over the mid- and longer-term, it has generally failed as a tactic in its purest form.

An open question is whether or not this occurs in some companies because of ZBB and heightened cost scrutiny or because companies are prioritising cost reduction over innovation and marketing-led growth.

With all of this noted, the critical challenge for marketers who believe in the long-term value of what they do remains to continually look for new ways to justify investment, preferably in language and numbers that procurement-driven finance teams understand.

If it weren’t, investors would probably look through the companies for proverbial loose change, leading to even worse outcomes for everyone involved.