Underperformance in several key sectors and locations is expected to continue into the first quarter of 2020.

The retail, automotive and restaurant industries have emerged as the Achilles heel of local economies in the U.S. according to Yelp.

The company, which has been tracking local economic activity through what it calls the Yelp Economic Average (YEA) for the past year, found that slumps in the retail and services business were the main culprit in an overall economic slowdown.

The YEA has so far tracked closely with GDP, making it an indicator of the nation’s overall economic health. 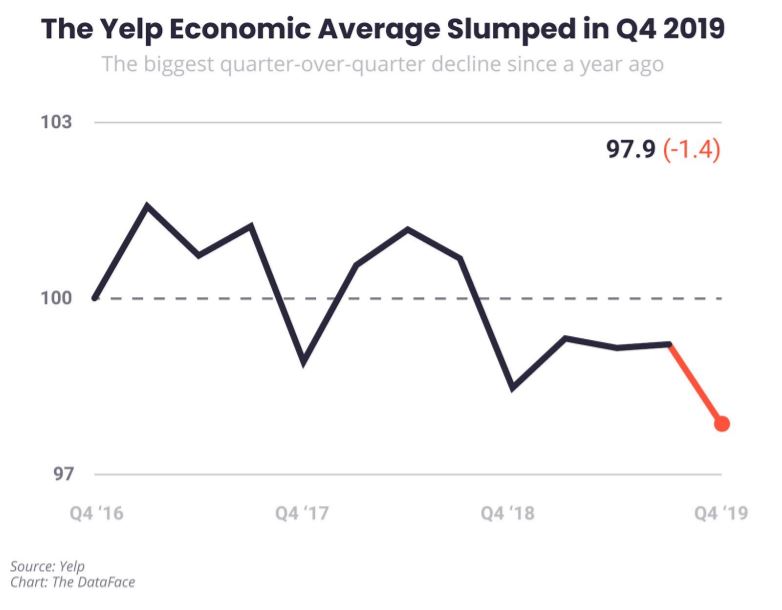 In the fourth quarter of 2019, YEA "fell by 1.4 points to 97.9, the biggest quarter-over-quarter decline since a year ago," the report reads.

Nationally, YEA came in at 98.9 in 2019, down 1.3 points from 2018, reflecting business profits declining, which contributed to a fall in business investments. Uncertainty around trade policy also hindered growth.

"If GDP growth continues to move the same way YEA does, we can expect fourth-quarter GDP growth to be below the third quarter’s level of a 2.1% increase," it continues.

The forecast for this quarter isn’t looking much better, with Yelp forecasting a continued decline in economic health based on the last three years of trends, nationally and in many of the country’s major markets and sectors. In addition to the restaurant and retail sectors- weakness in some of the largest economies are expected to continue, including California, Texas, Florida, New York City, Chicago and Seattle.

In the restaurant sector, fast food establishments took the largest hit, down 1.5 points from the prior year as diners opted for less standard options such as food trucks and juice bars.

Auto also slumped by as much as two points from the prior year in what may be the beginning effects of ride-sharing on gas stations, auto repair shops and the like.

These DTC companies are disrupting the old guard

Alicia Keys touts Lyft's initiative to round up fares for charity

A Cross-Cultural Approach to Defeating Indifference

The decade with no name held some surprises