Senior director and head of marketing for EMEA has high hopes that the internet company's new products will help it fulfil its ambitions for 2012.

Every week, it seems, there is a further twist in the Yahoo! saga. Redundancies and high-profile departures, including the highly publicised dismissal of former chief executive Carol Bartz after a tumultuous 32 months in charge, acquisition speculation and heightened competition have kept the digital media company in the news for the wrong reasons.

This year Yahoo! has appointed a new chief executive, Scott Thompson, and undertaken a global reorganisation of its marketing function. Meanwhile, its co-founder, Jerry Yang, has departed after 17 years and chairman Roy Bostock stepped down.

The knock-on effect of the marketing shake-up resulted in James Tipple, vice-president for marketing at Yahoo! EMEA, and Andrew Cocker, marketing director for EMEA, joining the growing list of departed executives.

Looking to steady the ship amid such turmoil is Robert Bridge, who has been promoted to the new role of senior director and head of marketing for EMEA.

Bridge's new job retains the remit of his previous role as Yahoo!'s business-to-business marketing director for the region, with the addition of consumer marketing.

Marketing meets Bridge, who is visiting Yahoo!'s London office from his base at its European headquarters in Geneva, six weeks into his tenure. In what is his first media interview, Bridge maintains an air of confidence throughout, but it quickly becomes apparent that he would rather not discuss the changes at the top of the business, saying they are 'way above my pay-grade'.

The company's recent lacklustre financial performance has been attributed largely to the stewardship of Bartz, who ended her reign at Yahoo! by revealing, in an email to staff, that she had been 'fired over the phone by Yahoo!'s chairman of the board'. In its 2011 annual results, Yahoo! posted a slip in global revenues, exacerbated by a decline in search and ad revenues, from $6.3bn in 2010 to $4.98bn in 2011.

Bridge is reluctant to divulge his opinion on Bartz, a somewhat divisive figure, but claims she made 'great' behind-the-scenes changes to the company's infrastructure and publishing systems. 'When I got here (nearly two years ago) there was a feeling she was making a difference,' he adds, diplomatically.

Nor will he speculate on how Yang's departure will affect the business. Nonetheless, he insists that the leadership changes, along with reports of possible takeover bids from a range of companies, including Google and Microsoft, do not really affect the European side of the business.

'In Europe we have good momentum and are not affected by these stories from Silicon Valley, which is much more under a microscope', says Bridge.

Again, while he has received 'positive feedback' about chief executive Thompson from those who have met him, Bridge warns that the future situation is 'difficult to assess' because the new boss has yet to present his vision for the company's direction.

Reports from the US suggest Thompson is plotting a major reorganisation, which could result in the recruitment of more product executives to drive innovation, as well as the hiring of a head of ad sales or a revenue chief.

As the company, once again, stands on the brink of significant change, one could be forgiven for asking what exactly Yahoo! stands for these days. Bridge jokingly rolls his eyes at 'the question everyone loves to ask', and in response refers to a comment made by Thompson.

'We can't be just a tech or a media company - we must be both,' he says. 'We are the premier digital media company, with an amazing range of technologies.'

Bridge says his overall strategy for marketing will remain 'fewer, bigger, better', as it was under Tipple's leadership, but with the addition of 'tentpoles and anchors' – Yahoo!-speak for tying its activity to key events such as this summer's Olympic Games and, crucially, its products.

The recent exit of Yahoo! global chief marketing officer Elisa Steel, who was behind the company's $100m 'It's you' campaign, appears to have put such activity on the backburner. Bridge appears to have little appetite to return to it.

'Traditionally web-based businesses are more product-led than brand-led, like FMCG marketing, and Yahoo! shouldn't be any different in that respect,' he contends.

The driving force behind this product strategy is Blake Irving, Yahoo!'s chief product officer, who defected from Microsoft two years ago, and one of the few members of the top team Bridge is keen to talk about.

He says that Irving, who leads innovation across Yahoo!'s consumer and advertising product portfolio, has an 'impressive road map', which includes the forthcoming UK launch of the company's personalised news tablet app, Livestand, and its social TV app, IntoNow.

Nonetheless, while Bridge talks about being more nimble and fast to market with its products, these words are not always matched by Yahoo!'s actions.

For example, as the UK awaits the launch of Livestand, Apple is gaining huge traction with its similar Newsstand product, which is being held up as a success story for digital publishers.

'Livestand in the States is doing well and we have a big enough audience to catch up, if we need to, very quickly,' claims Bridge. Even so, he concedes that speed to market is 'something we need to get better at'.

One of the positive outcomes of the global reorganisation of Yahoo!'s marketing function, he believes, was greater autonomy for the EMEA region. Bridge's goal now is to make the output 'as locally focused as possible'. 'Marketing in the Middle East compared with, say, Germany has to be different,' he adds.

Does Bridge, with his predominantly business-to-business background, feel that making the brand appeal to consumers, as well as advertisers, presents a challenge to his skills?

'My experience has been quite business-focused, but the challenges are the same,' he argues. 'Ultimately, it is about understanding the customer, whether that is a chief executive of an advertising agency or a consumer reading celebrity content on our OMG! site.'

Bridge is very much the digital marketer, and a champion of the industry through his role on the Internet Advertising Bureau (IAB) Europe board. He believes his experience in the digital industry, garnered at businesses such as Phorm and the Telegraph Group, stand him in good stead for the role.

Yahoo! will still run TV advertising in conjunction with Eurosport around major sporting events, but in future the media mix will be weighted toward digital.

'My strategy is to make our marketing as digital as possible,' says Bridge. 'I firmly believe in the medium and want to make sure my marketers are using it.'

He has strong views on issues such as privacy, particularly since Yahoo! has rolled out its 'Ad Choices' logo, which lets website users in Europe check how their personal data is being used by brands to target ads.

'Yahoo! is committed to privacy and our Ad Choices icon is an industry-leading practice,' says Bridge. 'Privacy and self-regulation is an ongoing issue and there is an education piece to be done to get attention from corporations and governments, which we are doing on the IAB Europe board.'

Asked whether his views have been shaped by his time as global marketing director of Phorm, the behavioural targeting firm that was criticised for using its technology at an ISP level, he smiles. 'It was an incredible experience. I learned a lot from a PR perspective, watching the storm that formed around it.'

From a wider perspective, it's no secret that Yahoo! is being outpaced by rivals. Google posted total revenues of $10.58bn for the quarter to 31 December 2011, a 25% year- on-year increase. Meanwhile revenues at Facebook, which operates with less than a quarter of Yahoo!'s 13,000 employees, have grown 85% over the past year, to $3.7bn.

Rather than competition, Bridge prefers to talk of collaboration. 'Facebook's growth shows the value of the digital display world and digital marketing as a whole,' he says.

He adds that Yahoo! has a lot to gain from its integrations with the social network, which includes Yahoo!'s Facebook social app.

Yet the relationship is not quite as rosy as he paints it. As Marketing went to press, it emerged that Yahoo! had demanded licensing fees from Facebook to use its technology, bringing the ongoing patent wars to the latter's door. Reports suggest Yahoo! will take Facebook to court unless it settles fees over up to 20 patents. Yahoo! believes it has 'a responsibility to its shareholders, employees and other stakeholders' to protect its intellectual property.

Partnerships are vital, however, and Bridge points to the company's search alliance with Microsoft and their ad pact in the US as examples of the way in which it is working with other industry players to bolster its position in the market.

It is clear that Yahoo! has big ambitions for the year and, as a true digital marketer, Bridge is putting his faith in the products. 'One thing I bang on about all the time is belief,' he says. 'Believe in your products; you can't market without belief.' 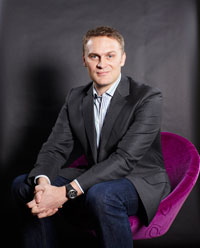 Family: Married with two sons. 'We've had no girls in the family since 1878.'

Hobbies: Surfing and, more recently, snowboarding. 'It's a 10-hour trip to the coast, so I've taken up snowboarding. It's not quite the same, but it's not bad.'

Drives: A Honda Civic. 'I get a lot of grief about this, but my wife drives the nicer car.'

Favourite media: 'The Telegraph and US tech blogs like AllThingsD.' 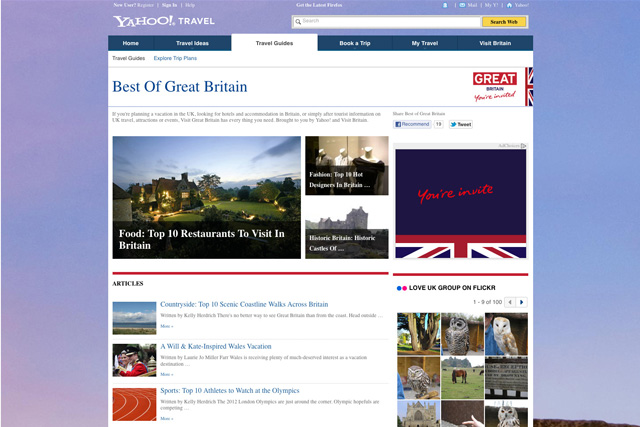 Yahoo! tied up with VisitBritain to become the exclusive digital display partner for the tourism body's global 'Great' campaign.

It launched the push last month, with a digital display component on Yahoo! Travel to attract tourists to the UK after the London 2012 Olympics.

The activity will roll out across other Yahoo! properties, including Germany, France, Brazil, the US and Japan, during the year. Yahoo! claims the campaign will enable VisitBritain to target 400m users.

A social integration drive with its photo-sharing site Flickr is also planned for later this year.

The truth about lying on your CV

Battle of the tech patents: is marketing the winner or loser?

VIDEO: Yahoo! brand is about "being fun, human and personal", says Bridge

Procter & Gamble, Heineken and Diageo: who wins and who loses in direct brand deals with Facebook?

VisitBritain embarks on global campaign to attract tourists beyond the Olympics