WPP remains well ahead of its rivals, according to analysis by Kingston Smith partner Esther Carder. 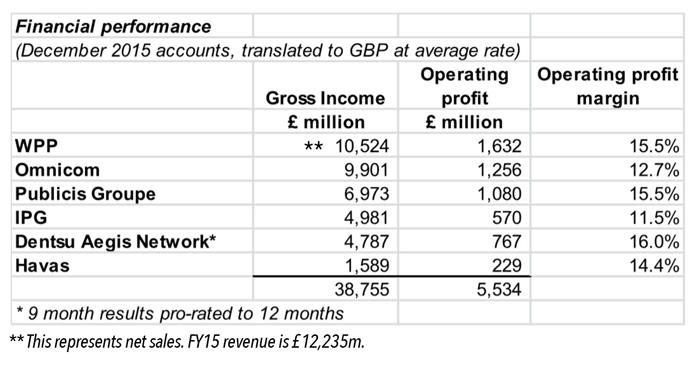 WPP continues to lead the way across the largest global marketing services groups.

The group reported another year of growth with Gross Income up 4.6% to £10.5bn and Operating Profit up 8% to £1.6bn.  The UK group also managed to increase operating profit margin by half a percentage point to 15.5%.

One reason for the lack of growth could be that Omnicom has not invested at the same rate as the other global firms, where acquisitions have been the main route to top line growth.  Whether this is a clear group policy, or is the result of caution and reluctance to pay the premium prices being demanded is not clear, however it is resulting in a lack of growth.

More recently Ominicom has been held back by the sharp decline in sterling. In the third quarter of 2016 its UK arm reported organic gross income growth of 5.2%. However when translated back into US dollars for group reporting this resulted in a fall of 10.4%.

WPP is currently experiencing the flip side of this, reporting revenue growth of 23.4% across the same period, due to the weakened pound.

Publicis experienced the largest growth in gross income across the global holding companies with a 32% jump to €9.6bn (£7.0bn). However again, only a small portion of this was organic growth and the group was boosted by favourable exchange rates and numerous acquisitions, particularly Sapient Corporation, which it acquired in February 2015 for $3.7bn. Although income jumped significantly, this came at a cost as the still high operating margin fell by one percent to 15.5%.

IPG also had a consistent year, seeing gross income increase by just 1%, but operating margin also improved resulting in 11% growth in operating profit.  There appears to still be room for improvement, as, despite the increase, IPG still has the lowest operating profit margin of our global groups at just 11.5%.

Dentsu Aegis Network reported results for the nine months ending December 2015, after changing its year end to bring it in line with Aegis Group, the UK advertising agency that Dentsu acquired in 2013.

The Japanese holding group also experienced significant growth for the period, which if pro rated for a full year would result in a 32% increase. This accords with Kingston Smith’s analysis of M&A deals which suggests Dentsu is the most prolific acquirer amongst the big international groups.

Employment costs to gross income continues to be one of the most important ratios influencing any group’s results.  The ratio is expected to vary across sectors, however for multi-disciplined groups a realistic target is 60%.

WPP and Dentsu were the only groups that managed to improve their ratio on the prior year, with Dentsu impressively nudging it just below 60% mark.

Significantly Omnicom has a ratio far higher than any of the other groups, which is impacting on profits and increasing the gap between itself and WPP as the market leader.

The staff costs per head shed more light on this, with Omnicom having by far and away the highest of the global groups.

This can be partly explained by the group having a high proportion of its workforce based in the US with relatively high salaries, compared to the more globally diversified groups where average salaries would be expected to be lower.

Moving on to the balance sheet an interesting point to note is that the big three of WPP, Omincom and Publicis Groupe all have net current liabilities and saw these increase significantly on the prior year.

Publicis saw the largest increase, in part due to the cash acquisition of Sapient Corporation. Omincom also saw a substantial increase, with net current liabilities up 128% to $2.2bn (£1.5bn) due to an additional $1 billion of its revolving credit facility falling due within one year.

Historically the acquisitive groups have always had net current liabilities and the flip side is the amount of goodwill carried on the balance sheet.

Groups should ensure they do not stretch themselves too far, although with borrowings at such cheap rates this is probably not an immediate concern for most. 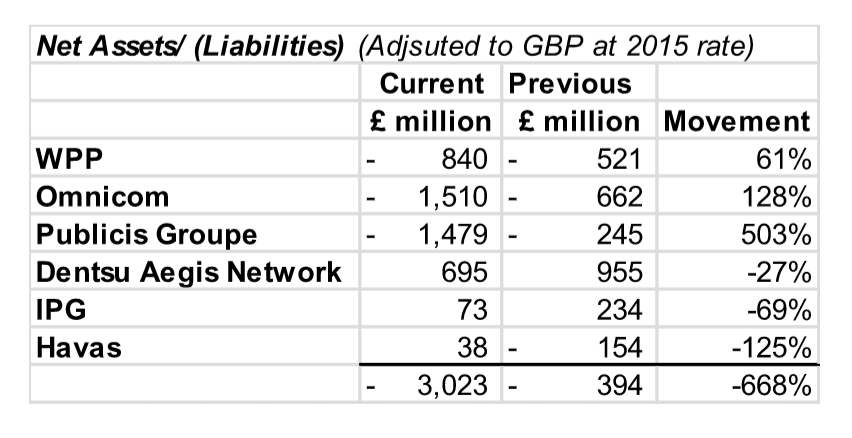 WPP continues to lead the way in market capitalisation, breaking the £21bn mark and well ahead of the remaining groups.

The share prices of all groups have generally followed the trends of the global markets over the past year. However Dentsu has been hit hardest by the impact of the UK vote to leave the European Union.

After the initial shock, the UK markets recovered and WPP’s share price received a boost from overseas investors taking advantage of the weakened pound.

However Dentsu relies significantly on the UK for income following the acquisition of UK based Aegis Group in 2013, so has been on the wrong side of the currency movements when UK results are translated back to Japanese Yen.

More recently both Omnicom and IPG have seen their share prices surge on the back of Trump’s presidential victory.

WPP drawn into US Department of Justice investigation

Group M: no Brexit or Trump effect yet on adspend

Programmatic spend will grow almost a third in 2017, forecast says

Will marketing spend decline in 2017?

Martin Sorrell plays down fears of UK ad recession in 2017