Mindshare, Xaxis and Finecast are also part of overhaul.

Group M is merging MediaCom and Essence among a raft of changes at WPP’s media division.

MediaCom, with around 8,000 staff, is significantly larger than Essence, which has about 2,000, and the merger will help the latter to scale its offering.

The rollout will begin in 2023 with a focus on major markets first, although the two agencies will operate separately in the UK due to client conflicts, which include Sky (a MediaCom client) and BT (an Essence client).

Nick Lawson, the global chief executive of MediaCom, will assume the same role at the helm of EssenceMediacom (the merged agency will drop the capital ‘C’ from the MediaCom name as part of the rebrand).

Kyoko Matsushita, the global chief executive of Essence, will be promoted to a new role as WPP’s CEO in Japan.

Christian Juhl, the global CEO of Group M, said the “simplification” drive across the media division, which employs 42,000 and manages over $50bn of billings, is about driving growth, not cutting costs or jobs.

“This isn’t any kind of exercise in trying to create synergies on the cost side, it’s really about creating synergies for growth and opportunity for our clients going forward,” Juhl told Campaign.

• Essence and MediaCom will merge to form EssenceMediacom, “fusing the digital and data-driven DNA of Essence with MediaCom’s scaled multichannel audience planning and strategic media expertise,” the company said.

• Mindshare will complete the integration with global performance agency Neo, “providing  clients with a broader range of transformative media services.”

Juhl said: “We are passionate about the opportunity technology gives us to help our clients navigate constant change and achieve their growth goals. The future of marketing is outcomes-driven, supported by audience-first planning and continually improving, AI-enabled performance standards.

“Through Group M Nexus and our agency powerhouses Mindshare, Wavemaker, and EssenceMediacom, we are building a tech-enabled future, side-by-side with our clients, that is accountable to advertisers’ growth goals and to our vision for an advertising ecosystem that works for everyone.”

Industry attention will focus on EssenceMediacom. MediaCom was founded in Germany in 1986 as a part of Grey Group and went on to merge with The Media Business in the UK in 1998, before becoming part of WPP in 2004. Essence was founded in the UK in 2005 and has made its name as a digital specialist, which led to its acquisition by WPP in 2015.

The merger may surprise some industry observers, particularly in the UK, where MediaCom is already by far the largest media agency in terms of billings (£1.4bn) and Essence – after a stellar year of 74% growth – is the fourth largest (£531m), according to Nielsen Ad Intel data for Campaign’s School Reports. 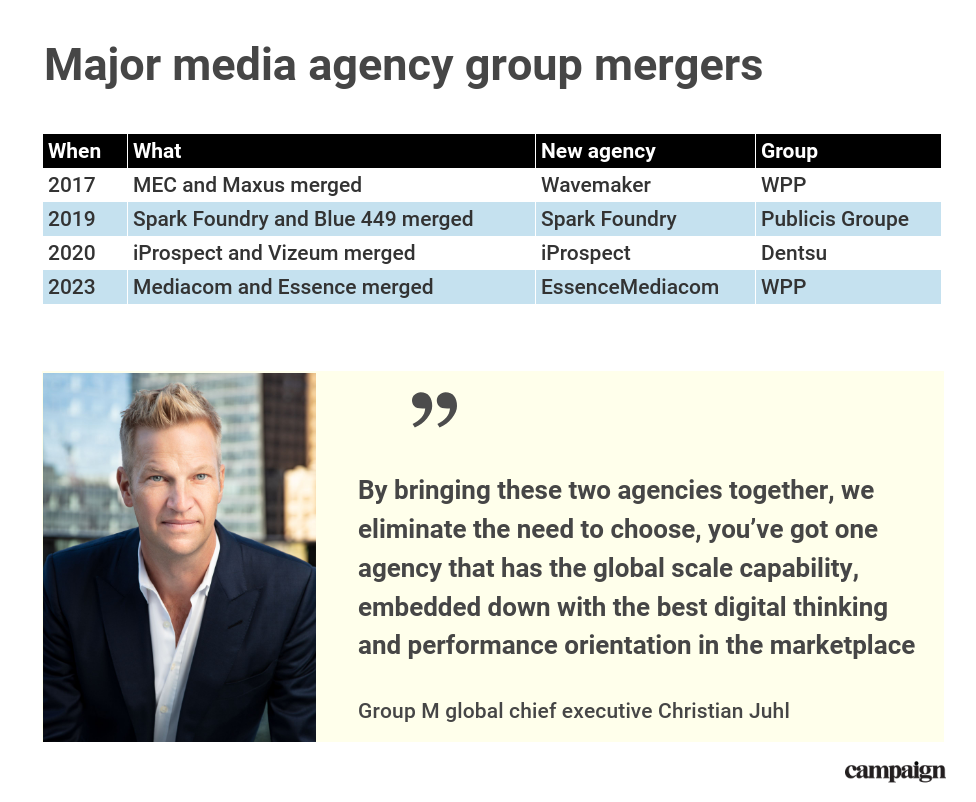 A single agency to handle both brand and performance

The two agencies already work together on several, large global accounts, including Google, NBCUniversal and Mars.

In the case of Google, MediaCom played a key role in helping to win the client's offline planning and buying when Essence consolidated the global media account last year, and the two agencies set up a cross-agency team, called the Media Futures Group, in what has turned out to be a blueprint for the combination.

“Clients right now, more than anything, want a single agency who can handle both brand and performance, single measurement metrics, single optimisation targets and really thinking about channel fluidity and how to move things to whatever is most efficient,” said Juhl, who previously ran Essence and led the sale of the business to WPP in 2015.

“The problem with being a pure-play digital-only [agency], as much as there's great growth around it, you can't address half of the media mix. So you're always sort of stuck in this hole of having to work across different agencies and for clients that can be frustrating. We see clients asking more and more for global consolidation.”

For MediaCom, the merger will bolster its digital and performance credentials as it is able to tap into WPP’s digital and Google specialist agency. Juhl said Essence and its clients will benefit from the scale and local media market expertise provided by MediaCom’s network of 125 offices.

“By bringing these two things together, we eliminate the need to choose, you’ve got one agency that has the global scale capability, embedded down with the best digital thinking and performance orientation in the marketplace,” Juhl added.

“The agency model our clients want for the future”

Lawson said the new EssenceMediacom network builds on “the strong and proven relationship between the agencies to create the agency model our clients want for the future”.

He added: “[This agency model is] one founded on brilliant strategy and brand-building capabilities, with pioneering digital expertise running throughout. EssenceMediacom will not only help our clients see the bigger picture and reimagine what’s possible; it will also provide opportunities for our people to upskill and train in new areas, further enriching and enhancing their careers.”

Juhl said the merger roll out would begin in 2023, likely starting with major markets but driven by client needs. Asked directly about any potential job losses at EssenceMediacom, he said: “No, right now I am not seeing anything.”

If there are any changes to job roles, there are “a lot of different opportunities for very talented folks” elsewhere in the group, he added.

Juhl said that clients have been broadly supportive of Group M’s consolidation plans to bring closer together digital performance, tech and traditional media planning and buying.

“Digitisation is changing how consumers live, play and shop and is therefore reshaping our industry at speed. The convergence of media, entertainment and commerce in digital environments is enabling us to  build brands and convert to sales in the same place,” he said.

“But in order to provide consumers with an  effortless end-to-end experience, as an industry we must utilise new skills and expertise, and harness new ways of working. We are encouraged by the changes announced today by Group M which will see greater integration between data-driven marketing, multichannel audience planning, performance, and strategic media expertise.” 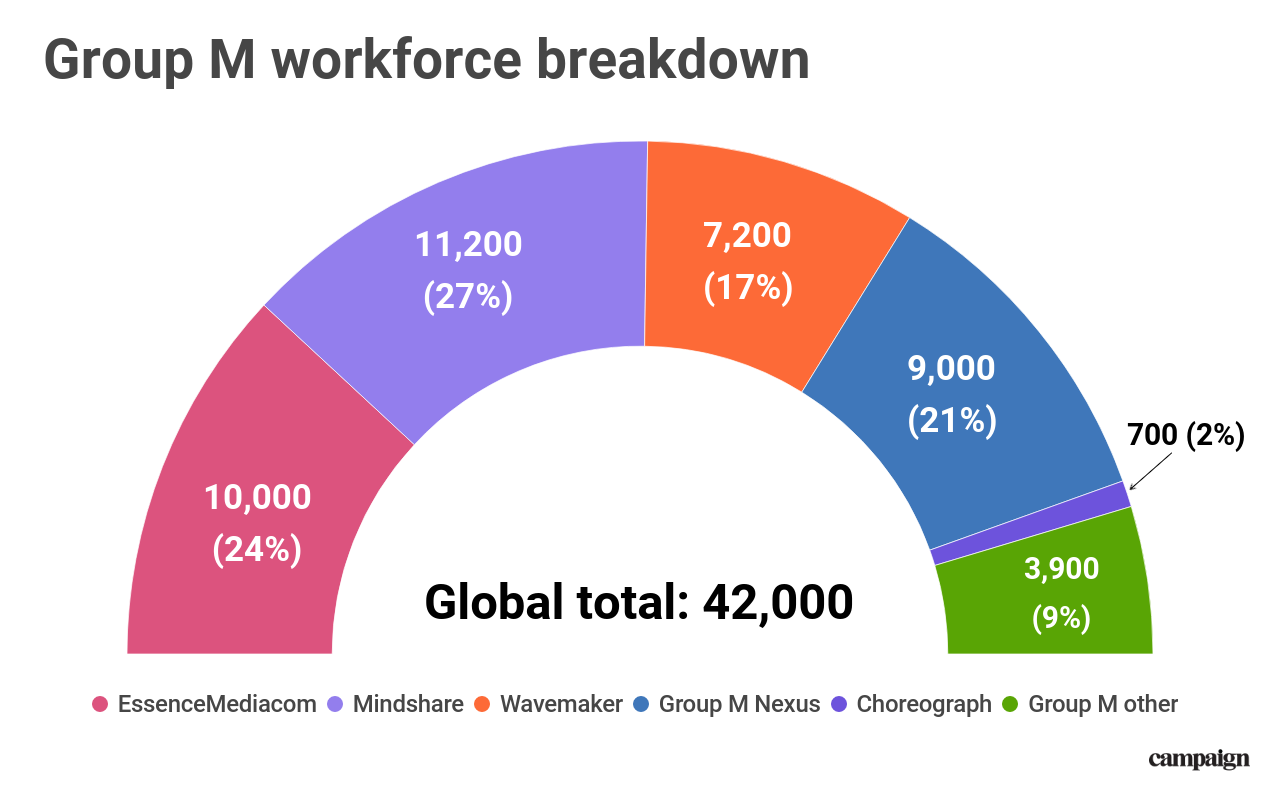 Group M Nexus will be responsible for the activation of more than two million campaigns each year and is described as the industry’s “largest team of experts in digital channels and platforms, search, social, programmatic, AI, cross-channel optimisation, and data-driven technologies and software”.

"GroupM Nexus unites leading media talent, digital  services excellence, cutting-edge AI technology and unique scaled partnerships into a new  cross-channel performance organisation with one purpose: power growth for our people, our  agencies and the amazing brands they represent. We cannot wait to innovate together and  unlock new opportunities for everyone,” Bidon said.

The final piece of the global restructure is Mindshare completing the integration of Neo’s 1,200 performance experts, consultants and digital-first services into its offering. Neo already operates within the Mindshare network but has been under its own brand; it will now adopt the Mindshare branding.

“This is a journey we’ve been on for the past year with many clients who have been demanding more diverse media services to drive their  growth,” Adam Gerhart, global chief executive of Mindshare, said.

“The merger delivers seamless access to Neo’s digital-first capabilities and a relentless  focus on performance models to accelerate Good Growth. For our teams it means more opportunity and the ability to create greater impact across the world. I’m delighted to partner with Neo CEO Nasreen Madhany as we complete the integration of the two businesses and  move into a new future together.”

How it comes together

The new Group M client offering will operate as a triple-layered pyramid structure. At the bottom of the structure is WPP’s global data and technology company Choreograph, which launched in April 2021 and assists clients with first-party data strategies, including identity solutions, audience insights, predictive analysis and optimisation.

In the middle layers is Group M Nexus, which provides clients with performance activation, AI and machine learning, and addressable media solutions.

On the top layer will be three media agencies: EssenceMediacom, Mindshare and Wavemaker, which work with clients to set media strategies and execute against them.

Juhl’s wider vision for Group M is to operate more like a software company that is focused on client outcomes.

“I'm really optimistic about where media sits right now. I think that the performance element, the outcomes-based element will be transformational for the industry,” he said. “We're seeing big contracts where we're taking risks along with our clients, and have the opportunity to benefit with our clients. More clients are saying, how do you tie your success to ours?”