Blockchain was only invented in 2008, starting off as technology to underpin the cryptocurrency bitcoin, but it's rapidly becoming famous, writes Peter Wells, associate at the Open Data Institute.

It is very difficult to remove information, and this can create trust in the stored information. In the bitcoin system, for which blockchains were originally designed, anyone can access and add information to the blockchain, though other systems are more restricted

There are some voices expressing a desire, or need, for a little caution about blockchains, but there are many others calling for full steam ahead.

Recently blockchains appeared on the front cover of The Economist with a tagline of "the trust machine" and a statement that blockchain technology ‘could transform the economy’.

Is the fame justified or are we falling for the hype machine? And what does this have to do with Beyoncé and feminism?

Fame and the hype cycle

Gartner has a nice visualisation called the hype cycle. It is not scientific but it neatly shows some of the stages that technologies typically go through.

There is a peak of inflated expectations before we work out how to actually use something and it becomes widely adopted and productive. 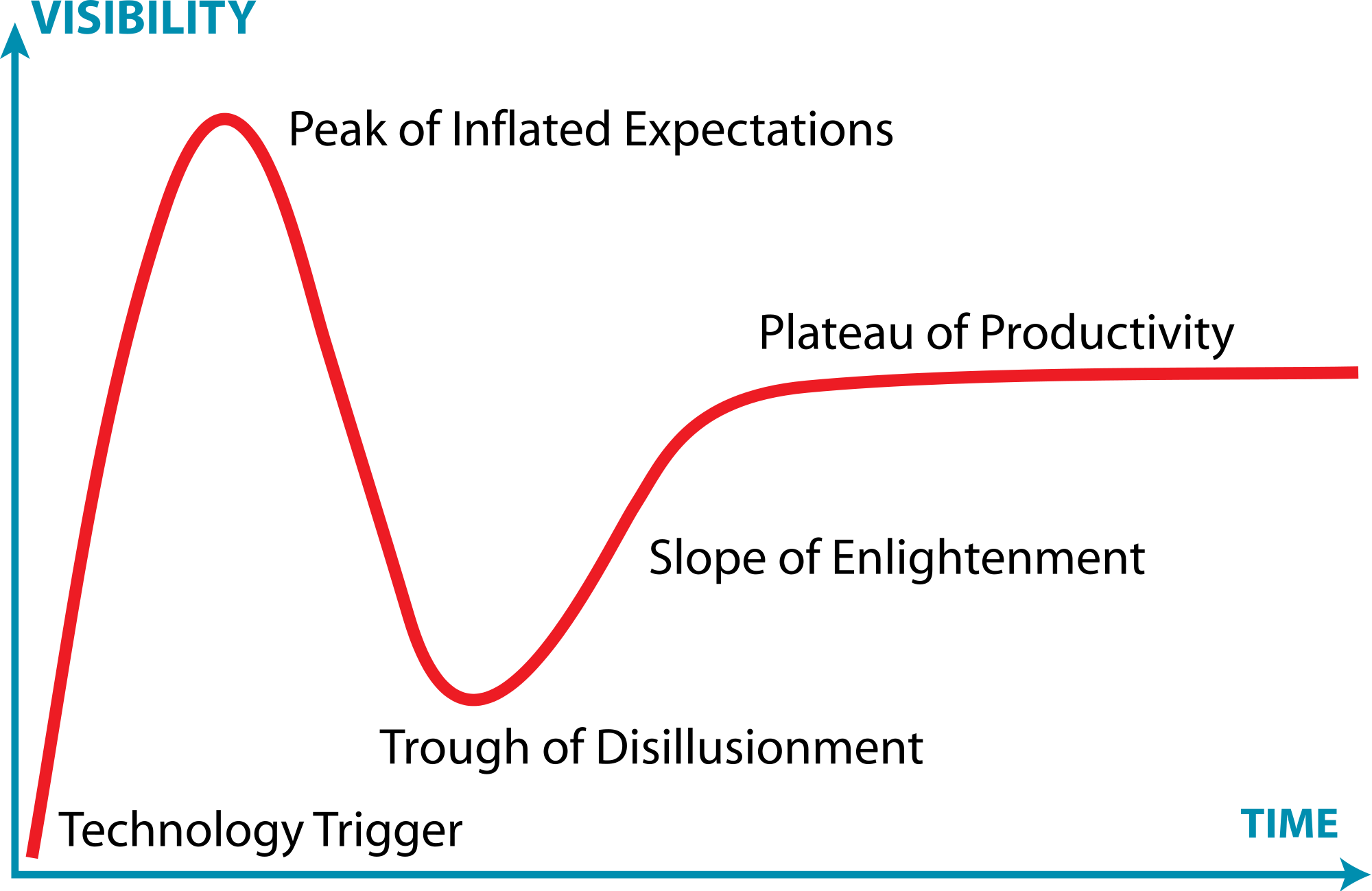 The hype cycle is pithy, but it is not great at showing time and failure.

With regards to time, it can sometimes take decades for a good idea to become widely used. We’ve been hearing about internet television since the 1990s and yet it’s only recently that Netflix has managed to use the internet to launch what might be the first global television network.

And with regards to failure, Gartner’s hype cycle doesn’t cover the technologies that fail altogether. Perhaps they are replaced after years of use (so long floppy disk) or perhaps they struggle to get adopted in the first place (farewell Betamax). People might spend billions on new technology but much of it was a waste of money. This isn’t necessarily because the technology was a bad invention: it might simply be another solution to a problem that was already solved.

There is a third problem with the hype cycle. It can be tricky to tell if a technology is on its way to the plateau of productivity or whether it’s still on the first slope. That’s the peak of inflated expectations.

One way to differentiate the peak of inflated expectations from the slope of enlightenment is when people start to weed out daft ideas for a particular technology and instead focus on more relevant ones.

It is possible to see almost any problem and think that blockchain technology will help. Working out which problems the technology can usefully help to solve will require careful thought.

If you look on Twitter, you will find that someone set up the Blockchain Institute. Perhaps this official-sounding organisation will come up with some good ideas as to the practical application of blockchain?

A quick look through the institute’s Twitter mentions shows people thanking it for sharing conferences and blogs, criticising it for not crediting images, including it in conversations, connecting it with friends, and asking it questions. I went to an event recently where someone told me the Institute had a slightly quirky take on blockchains but had interesting things to say. They asked me if I knew who was writing the tweets.

But the Blockchain Institute is a computer program. Not only that, it’s a program that tweets nonsense.

I did not write it or set it up but I can see what the program is doing. It replaces the word blockchain with Beyoncé and bitcoin with feminism. If it sees a tweet that says "blockchain is a star because of bitcoin" it changes it to "Beyoncé is a star because of feminism". There is no new content. The computer program does word substitution. Nothing more complex. Yet people are struggling to spot that it’s simply copying other people’s thoughts, words and ideas and - for some reason known only to its creator - adding in a bit of extra Beyoncé and feminism.

People are trusting opinions without recognising they are coming from a machine, or that they don’t actually make any sense.

This, and the many ridiculous ideas for using the technology, are reasonable signals that blockchains are heading towards the peak of inflated expectations.

People still don’t understand blockchain technology, what it might be useful for and whether it adds anything to the existing suite of technologies and organisational models for storing and sharing data. Disillusionment will surely follow.

Beyoncé and feminism are changing the world

It remains to be seen whether over time we will see blockchain technology become productive and deliver real value, or whether blockchains will fail.

Blockchains seem to be moving through the hype cycle faster than many other technologies. But some things never escape the hype cycle and never become productive. We need to be more wary of hype. We need more research, trials and successful implementations to find out whether in this case it is justified.

In the meantime I do recommend keeping an eye on the Blockchain Institute. While the technology world continues to struggle with gender balance and social media is being used to abuse and troll so many women it is useful to have regular reminders of the revolutionary impact that feminism has had on society and that Beyoncé and feminism are changing the world.

How many bitcoins for a bath bomb? Lush is now accepting cryptocurrency

The 2015 technology and marketing year in review

Bitcoin: How Barclays might make the 'Ebola' of banking palatable