People.io claims to offer a level of engagement that most digital platforms can only dream of. But there's one catch: brands must relinquish full control of their marketing. Will they find the courage to take the plunge?

It’s not especially controversial to suggest that most people don’t really enjoy being advertised to, and there is no shortage of experimentation in finding new ways for brands to take their message to the people – from brand-laden feature films to Pokémon Go-style apps where users steal brand goodies from each other.

But there is a second huge challenge facing marketers: the increasing discomfort of consumers over the control and use of their personal data.

That’s where People.io comes in. It’s a platform that gathers data from users by asking them questions, and then serves ads within the platform. Consumers are rewarded with credits, which can be traded for gift cards and other freebies, whenever they provide answers or receive an ad.

Crucially, users retain full control of their data; if and when they leave the platform, their data is deleted.

People.io’s founder Nic Oliver describes the mission of the platform as giving people ownership of their data, to create the equivalent of a "firewall" for how it is used.

"We never sell any user data," Oliver says. "Our platform is not about rewarding users for having sold their data. In the same way that if Uber was sold tomorrow, they wouldn’t be selling any of the cars."

With large-scale hacks now a frequent feature of the news cycle and concerns about the way data is being used in elections, questions of security and how data is used are obviously key motivators for a system that gives consumers more control.

But there are also economic and technological reasons to put control in the hands of users, Oliver says: "As artificial intelligence continues its exponential growth, we’re starting to see individuals decoupled from the value of their data.

"In this evolving world of machine learning and AI, apps and devices need a certain amount of data to do what they do. But the majority of that is held by one of the big five tech companies. So if you’re a new entrant, how do you access the data you need?" 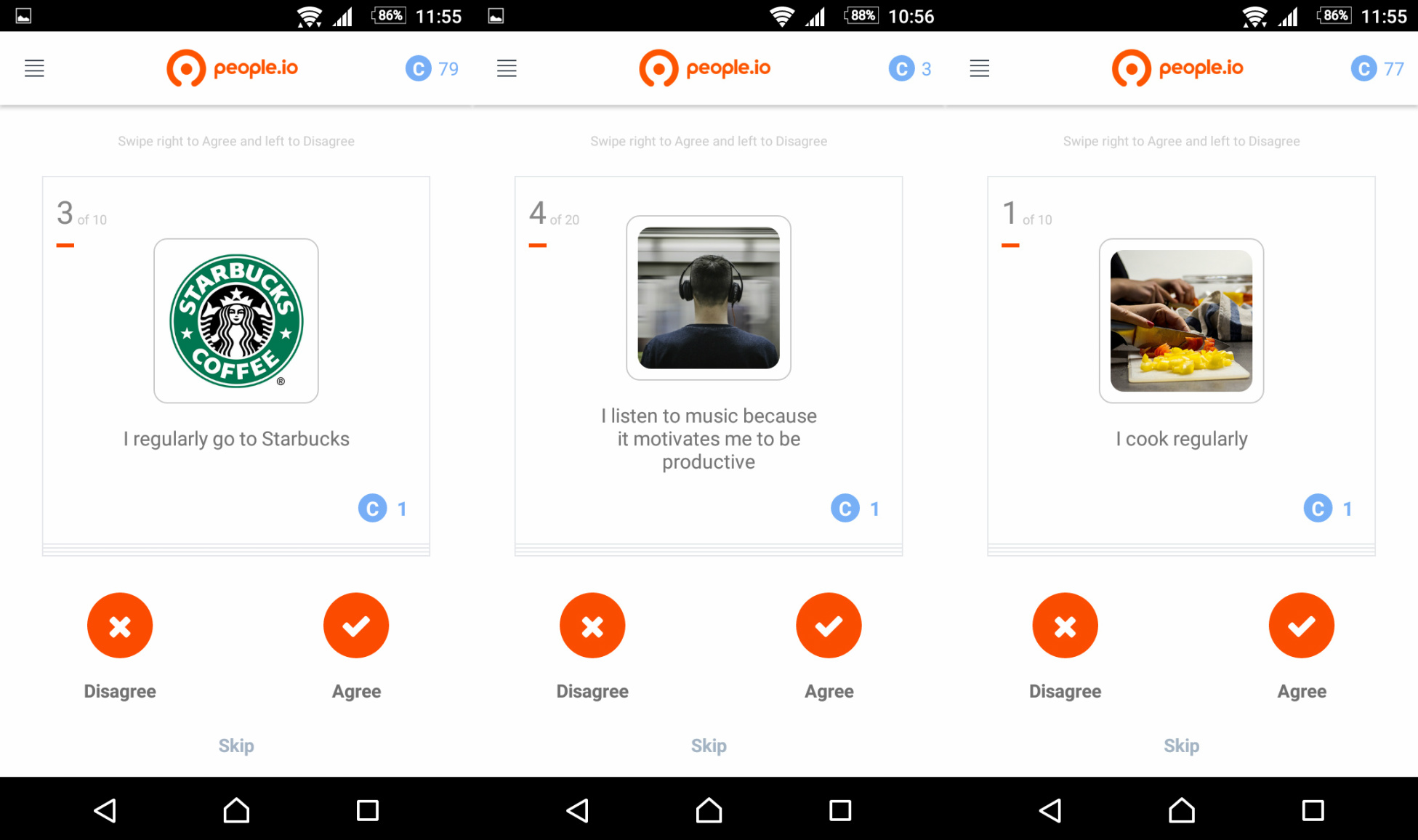 Oliver says that the average user is able to earn enough credits in a month to roughly pay for a music streaming subscription – although there are a range of rewards, designed to appeal to users that value things differently.

These have recently included donations to We Love Manchester, the emergency fund set up following May’s terror attack.

Most people enjoy getting free stuff – but the appeal to brands is, in theory, even clearer: People.io is regularly getting a click-through rate of above 36%.

Why? Because all of its users have explicitly consented to be advertised to, have specified which type of ads they’re interested in receiving and when they want to get them.

The data that users willingly provide, Oliver says, means brands can move from "targeting by life stages to micro-moments" with a high degree of confidence that they are reaching consumers at the right moments.

For example, a hair care brand might choose to send ads to users that have answered a question saying they have just had a haircut.

Or, "imagine you’re a drinks manufacturer," Oliver says. "Throughout the week you can ask questions about their music taste, where they go on the weekend etc. On Friday, between 3pm and 5pm, we can send a piece of content to that user influenced by those answers."

The platform has around 100,000 users, 80% in the UK, and predominantly 18-25. Engagement is high: the average user opens the app five days a week, and retention of the app after 90 days is around ten times higher than average, Oliver claims.

One of his frustrations is that what seems to be the small scale of the platform is putting off certain advertisers. One travel and ticketing site, for example, had said that they would need it to have a million users to meet their requirements.

But this is a false economy, Oliver says, that he sees as widespread in marketing: that anything other than engaged users should matter.

"Imagine if I created nine million fake users," he says. "My click-through rate would still be higher [than most other digital platforms]."

But the biggest barrier is the change of mentality needed for marketers to embrace a system in which they have no control of the data that is directing their communications.

"If I was running a big multinational and someone came and told me to stop using all my data, of course I’m not going to do that," Oliver admits.

"I do think brands are a little scared, but it’s often simply that they haven’t been presented with a better option."

The use of the platform to serve ads and brand content is "very much stage 0.1" of what People.io wants to achieve, Oliver explains.

Within its defining characteristic of keeping users in control of their data, he wants to expand the number of both inputs and outputs. This means linking up to more apps and offering functionality for users other than providing rewards.

It is currently working with Spotify, for example, to offer playlists generated from data provided by the user.

It also recently formed a partnership with O2 in Germany, launching a product called O2 Get – essentially a re-branded version of the People.io app.

It ties into Telefonica’s "fourth platform" strategy, which aims to give users more control over their data. Oliver says he is in discussions with networks in 35 different countries, including the UK.

"The data held by telcos is incredibly powerful," he says. "There is a huge amount of data the networks have on their customers, and that should not be used for any purpose other than providing the core product for the customer. But imagine the potential if the person had control over that data."

What should marketers do to comply with the new 'right to be forgotten' rules?

The last thing the industry needs is a blockchain 'solution'

What does GDPR mean for agency contracts?