The audio brand's new global campaign from Anomaly provides a cure to a new epidemic spreading the globe.

Last night, James Corden became the first comedian to host the Grammy Awards in more than a decade. While the "The Late Late Show" star added laughs to the broadcast of the 59-year-old show, one prominent advertiser, Sonos, struck a somber tone to raise awareness about a growing epidemic—quiet homes.

The audio brand abandoned the light-hearted comedy of its most recent ads to "Wake Up the Silent Home" with a minute-and-a-half spot from Anomaly New York that introduced viewers to a new "sickness" plaguing society. In the spot, which ran during the first three commercial breaks on the CBS broadcast, a woman, shadowed in darkness, stands outside an apartment building, pensively watching residents gathered in living rooms, huddled around kitchen tables and dining rooms, sitting together in silence. "Look at them," she says, describing the afflicted. She smashes through the quiet with the cure—a Sonos speaker she hurls through one of the windows.

The drama in the ad was inspired by a brand study that showed music-listening at home is increasingly becoming a solitary experience driven by digital devices. Working with neuroscientist Daniel Levitin, author of "This is Your Brain on Music," Sonos surveyed 9,000 people around the world to analyze home audio environments and found 67 percent of the families surveyed do not listen to music when they are together at home or hosting guests. In the US, the number jumps to 79 percent.

"The numbers in the study are validating the sense that everyone has—we’re all increasingly living in this self-induced bubble and we’re all so comfortable in this bubble that we don’t want to step outside when we come home," said Joy Howard, CMO of Sonos. "It’s really stripping us of authentic interactions and making it difficult to truly connect with each other in the place most important to us which is our home."

The study found that screens play a large role in keeping people from turning on their speakers. Forty-four percent of participants around the world said they listen to music alone or with headphones at home. Sixty-two percent of respondents said that more of their daily interactions with people take place digitally, and 46 percent admitted their family members spend more time interacting with technology than with each other. 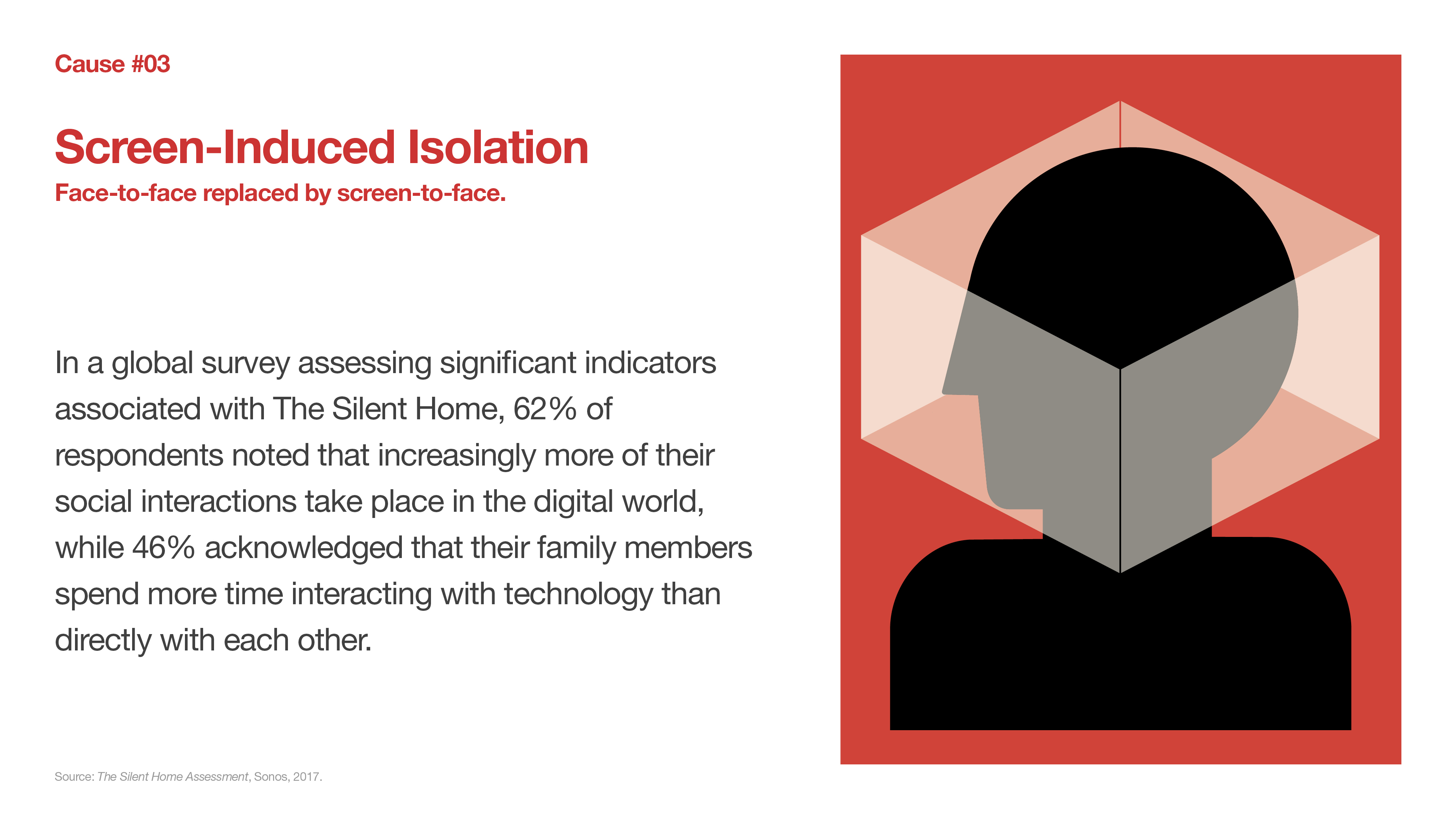 The brand describes the change in music habits as an epidemic, said Howard, because research has shown that music affects health. Last year, the brand conducted a national study with Dr. Levitan, "Music Makes it Home," that found a correlation between listening to music and happiness in the home.

"Wake Up the Silent Home" marks a departure from the comedic-approach the brand took to tackle the issue in its last global effort, which premiered last August. Called "You’re Better Than This," the campaign featured a series of humorous short videos that poked fun at the struggles people endure when playing music on tiny devices and speakers.

While the comedic approach gave Sonos "the best performing campaign the brand has ever had," said Howard, the brand wanted to turn up the volume in the "Silent Home" with a more forceful message.

"We know that many people are locked in complacency and in silence and not quite aware of it," said Howard. "So we wanted to shake people out of this complacency and wake them up to the importance of restoring music to the center of their lives and home."

The ad will run on TV and in cinemas around the globe, as well as on the brand’s social channels. "We are going to look for high-impact sharing moments," said Howard.

Last year on Grammy’s, Sonos ran ads about the effects of music deprivation. In 30-second and 60-second spots, celebrities such as St. Vincent and The National's Matt Berninger, as well as real people, described how they felt when their music was taken away from them for a week and then returned to them with a Sonos speaker system.

Shazam's new AR platform has one thing the others don't: Scale

Can you find the women in these 'Where's Waldo'-style posters of Egyptian workplaces?