We define ourselves not only by what we are, but what we aren't, and we respond well to things that attack, invalidate or oppose the "other" point of view, says Sense New York.

In marketing, as with everything, the spoils often go to those who adopt a contrarian approach—and an interesting one is starting to take shape. What if instead of identifying your target audience and attempting to appeal to them, you identified the group of people you know would never buy your product no matter what marketing approach you used, and attempted to repel them?

At first this might sound strange, but it has precedent. Thanks to the internet herding us into well-defined cultural tribes, we live in an age that is polarized like never before. In such an environment, we define ourselves not only by what we are, but what we aren’t, and we respond well to things that attack, invalidate or oppose the "other" point of view.

Want an example? Look at our President. Trump won the support of a large coalition of conservative voters despite being personally unpopular with them and taking policy positions that many opposed. His secret was not what he stood for however, but what he stood against—the media, globalism and political correctness; all of which he attacked vigorously. Rubio, Bush and Cruz might have been more conservative, but they were considerably kinder to these "enemies" than Trump was, and thus failed to capture the imagination as effectively.

Focusing on repelling your "anti-market" (rather than attracting your real one) naturally creates far more disarming campaigns, and in turn engenders much greater loyalty and passion amongst those you wish to influence.

There were occasional instances of brands using this approach in the past, most notably the infamous Benneton ads, such as those depicting Pope Benedict XVI making out with Imam Ahmed el-Tayeb. While they might argue that their message of "unhate" was a positive one, it’s clear that the creative was seeking primarily to provoke a reaction from traditional religious types who wouldn’t buy Benneton anyway, thus giving a chuckle to the urbane secularist who might. However, arguably, repulsion marketing didn’t really come of age until the Protein World scandal of 2015 in the UK. 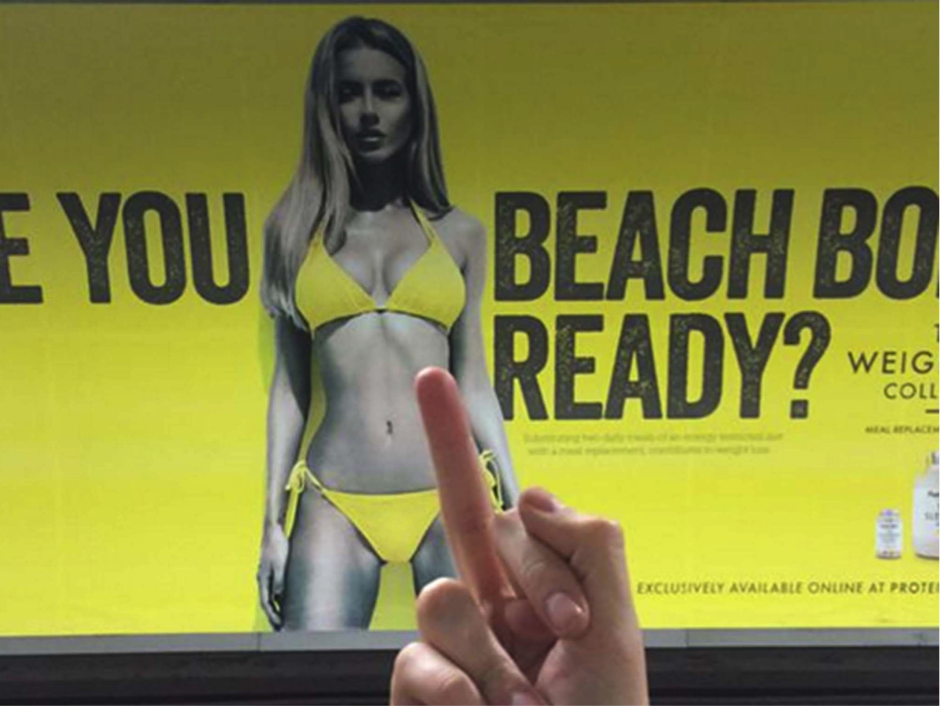 Long story short, this saw a little-known exercise supplement brand release an ad that came under severe criticism from people who saw it as body-shaming. This was accidental on their part, but the company’s reaction on social media wasn’t. Rather than follow the standard brand playbook by immediately apologizing, Protein World doubled down, mocking their critics and thus delighting their core "gym bunny" audience, who of course thought the criticisms were unfounded.

The result was £2 million in sales in two weeks after what was initially a tiny campaign commissioned by an unfamiliar brand. It seemed that standing against "the enemy" was far more effective for Protein World than standing for themselves ever had been, resulting in one of the greatest marketing (if not necessarily moral) triumphs of the decade.

Since then, few brands have explicitly followed Protein World’s lead, but the current political climate has seen certain ones try to use Trump’s own techniques against him, such as the unflattering depiction of his supporters featured in Ben & Jerry’s "One Sweet World" spot, which has gathered an unusually balanced share of likes and dislikes on YouTube as a result. However, the important thing to note, despite the political tone of these examples, is that this strategy isn’t about politics. It is about simply identifying what you’re not, in order to excite other people who aren’t it either—and that could be on any topic.

An example of this "softer" approach came in 2011 when Patagonia famously implored people to "not buy this jacket" on Black Friday. Once again, few people storming the stores that day would have given this a second glance, but it wasn’t for them—it was for the Patagonia fans who would share the brand’s disdain for this unseemly display. This attack on an anti-market naturally gained great exposure and sales results.

As marketers, it’s worth trying to play this game, because when done elegantly the results can be creatively striking. Here are a few basic guidelines:

Know thyself.
You must know precisely what you stand for in the world. It sounds obvious, but not many brands have this succinctly figured out. Be honest, be real and identify exactly who will buy into you. No "pen portraits." Your true consumer.

Be authentic.
If you stand for something, or have a strong identity of any sort, you will by definition turn some people off. Don’t be afraid of this.  Play it to your advantage. Those who love you will love you even more. Those you are seeking will hear you loud and clear. Those turned off will be grateful for the clarity. It’s an efficient system!

Don’t invest in promiscuity.
Die-hard fans = brand longevity. Appealing to these people with your campaigns should be your priority. Others may be easy to tempt, but a challenge to retain, because they’re not right for you. It’s like a relationship—invest in love not lust…it’ll be far more rewarding.

Evolve, just don’t change.
Innovation is essential—so long as your loyalists aren’t alienated. Don’t be tempted to change to suit the latest trend. Evolve, but stay true to your core brand values.

Create your dream panel.
Build a panel (real or imaginary!) of your loyal supporters and ultimate customers. Run your big brand decisions past them. They are your toughest critics and your best advisors. Make the most of them.

The future of experiential lies in focusing on what your consumer is not, compared to what they are. As marketers, if we can utilize this untraditional method of experiential by repelling the masses and in turn rallying those who are passionate about (and connected to) your approach, vision and values, the disarming results will speak for themselves. Large scale positioning is a thing of the past. The true secret to modern marketing is the ability to operate in a much more narrow, strategic and targeted way.

A brief history of the car crash commercial

Public View - How did the public react to the latest Drench ad?