For the first time, the animal rights group makes the "extremely odd move" to back the fast food chain.

Taco Bell received free advertising from an unexpected source today. The animal rights group People for the Ethical Treatment of Animals is encouraging motorists to visit the restaurant chain for a bean burrito—a vegan menu option—in its latest billboard campaign.

Debuting in Florida, Georgia and New York, the OOH effort features a close-up image of a chicken asking drivers, "Would it kill you to get a bean burrito?"  Placed near Taco Bell locations, the campaign borrows from the fast-food company’s ad slogan, suggesting "Let's All 'Live Más,’" and directs people to the closest restaurant. PETA’s "Lettuce Ladies," who have appeared in ads for the group wearing lettuce leaves for bikinis, will add a live element to the push and hand out the burritos to passersby in front of some restaurants.

While PETA and Taco Bell might strike some as odd bedfellows, the goal of the campaign is "to reduce the greatest amount of suffering possible, and that doesn’t only mean steer everyone to a vegan restaurant," said Ingrid Newkirk, president and cofounder of PETA, which created the campaign in-house. "It means, show the restaurants like Taco Bell, McDonald’s and Wendy’s that there is a big market waiting for them to corner."

It’s been a steady strategy for the animal rights group since 2014.  Although this is the first time PETA’s endorsed a fast-food chain in an advertising campaign, the group does regularly promote their vegan options. Within the past year, it’s been very complimentary of Burger King, which it once targeted in an ad campaign titled "Murder King," pointing out that seven of its menu items are vegan via social media and on its website. "We try to provide everything," from vegan recipes to vegan fast food guides, to make it easy, Newkirk said. Still, PETA continues to call out restaurants when they miss the mark, like Burger King did in 2015 with its "Gloria" chicken fries advertisement. 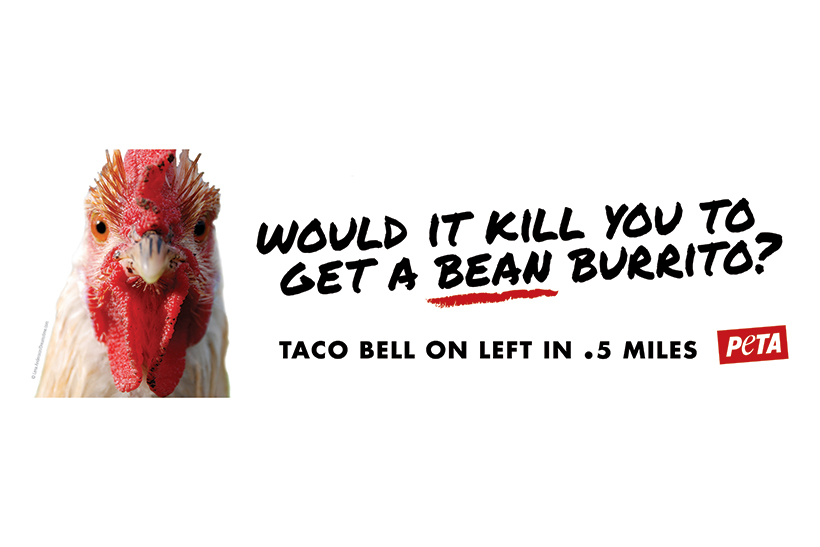 "We’ve always campaigned against the Yum Corporation through the years, so people will find this extremely odd, including perhaps some of our own members," said Newkirk. For example, since the early 2000s, PETA has targeted Yum-owned Kentucky Fried Chicken for its chicken production practices, including creating the website KentuckyFriedCruelty.com. But even the PETA president admits she stops at Taco Bell when traveling and orders a bean burrito with jalapenos and Fire Sauce.

Newkirk, who’s developed a love for chickens after having rescued them for years, stressed that the ads don’t signify an endorsement for the way Taco Bell treats its poultry. She’s met with Taco Bell executives and has "found that they are not willing to lift a finger to even improve one iota the way in which these little birds are factory farmed."

Chicken is so cheap, she said, that it’s all over Taco Bell’s menu. "I thought, ‘What can we do?’ It occurred to me that we should have a chicken looking directly at people, pleading for her life and saying, basically, eat something else. Would it kill you to order the bean tacos?"

Although Taco Bell promoted its vegan options on its website late last year, the company has chosen to remain at arm’s length from PETA’s campaign. Rob Poetsch, Taco Bell’s director of public affairs and engagement, replied to an email with this statement: "We’re all about providing people with choices, whether it’s a Bean Burrito from our certified vegetarian menu to our Triple Double Crunchwrap. We're proud to have something for every lifestyle."

But Taco Bell’s lukewarm reaction doesn’t faze Newkirk. She said she doesn’t care "as long as someone sees it and orders the bean tacos." After all, Taco Bell’s bean burrito is the chain’s second most popular menu item, and "the more vegan foods they have, the fewer flesh foods they will sell."

Taco Bell is shifting its ad spend from digital to TV