Reasons for why women continue to earn less are far more complex than attitudes of neanderthal men, writes the chief executive of Now.

The 6 April. It’s a date I will always remember. First and foremost because it’s my daughter’s birthday. She’ll be seven. It’s also the day that, in 2017, will see the Gender Pay Gap Regulations from The Equality Act 2010 finally come into full force. I like the synergy, because I would love my daughter to grow up in a work environment that is genuinely equal. Sadly it’s a tough ask, because the current predictions are that women will earn less than men for another 24 years. She’ll be 31 then. How depressing.

It’s quite unbelievable, not to mention illegal, that in this day and age women continue to be discriminated against. These new regulations mean that companies with more than 250 employees are legally obliged to publish their pay gap figures. This means reporting on the six key metrics which determine gender discrimination. It’s complicated, but bear with me – it’s essentially the mean and median gender pay gap, the mean and median gender bonus gap, the proportion of men and women getting a bonus, and the proportion of men and women in each of the four pay quartiles. This is great news for business, because it means that everyone will have to take a long, hard look at themselves and their behaviours, because being bottom of a league table might be an extra incentive to change behaviour. So, even though it might take 40 years, it’s a really important step and it might inspire other, smaller companies to take similar steps. 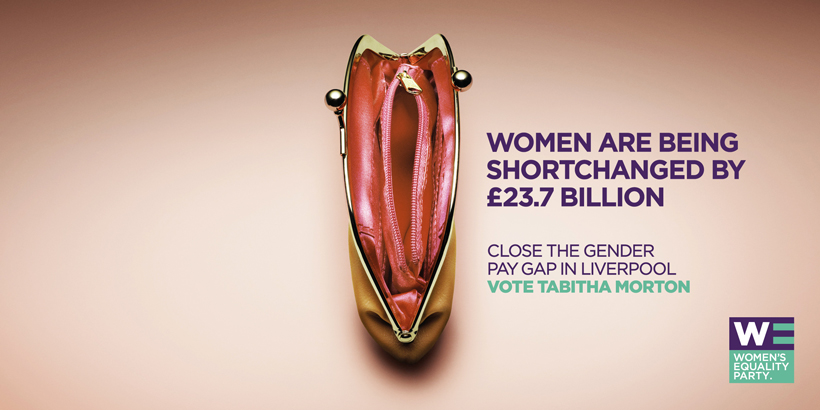 Because the problem is that it’s all so ingrained. It’s not just some neanderthal male boss thinking that women deserve less, it’s far more complex than that. Just have a go at the Harvard Implicit Association Gender Test and you’ll see. Essentially the test is about stereotypes – demonstrating our bias about the certain characteristics of a group. An ‘implicit stereotype’ is essentially your subconscious. So, even if, for example, you say that men and women are equally funny (ahem), you might subconsciously link humour more strongly with men, without being actively aware of it. The test would therefore give you an implicit humour + man stereotype. It’s gutting that even the most liberally-minded person will struggle to avoid subconsciously associating men with work, and women with home. But it’s happened through years of conditioning.

According to the Fawcett Society, the current overall gap for full time workers is 13.9%

Despite Tom Knox’s diversity agenda, the advertising industry is struggling to make the necessary strides. We’re not bad on a general balance of gender (or indeed pay) across the board, but we only have 27% of women in senior positions across creative and media agencies (chairman, chief executive and managing director), and just 31.5% in the next tier of ‘other executive management’. All this in spite of the fact that the graduate intake for the industry is around the 60% mark. And the really shocking stat we’ve all been talking about of late is how just 12% of creative directors in the UK are female. It reminds me of an old creative director who, when a headhunter called him to recommend a female creative duo, memorably said: "No need, we’ve already got an all-girl team."

But, compared to many other industries and parts of the country, we’re light years ahead. According to the Fawcett Society, the current overall gap for full-time workers is 13.9%, and 54,000 women are bullied into leaving their job early each year after having a baby. £23.7bn per year could be added to the North-West economy if women could work the hours they wanted to, at the same rate of pay as men. It’s a shocking statistic that we’ve tried to get across in the most impactful way possible to support the Women’s Equality Party candidate for Liverpool Metro Mayor.

We’ve always been proud of having two female founders at Now. We didn’t do it to make a point, we did it because it makes us a better agency. I love my male business partners (not in that way), but balance is crucial. We’re not yet required by law to publish, but we will start the auditing process and publish anyway, because it’s the right thing to do.

So, let’s all do our bit to effect change. Not because we have to, but because we want to. As Sandi Toksvig said: "We need to change the world fast, because we’re women and we’ve got other shit to do." And, of course, because equality is genuinely better for everyone.

Melissa Robertson is the chief executive of Now

Why female creatives don't get to pitch

The first female precedent: how role models can change the world for women

Women of tomorrow: The winners 2016

Lindsay Pattison: Let's all try harder to walk the talk with women's equality