For years it was the unloved child of the drinks family - but alcohol-free beer has reinvented itself and marketers are taking note.

You might be thinking: really? Non-alcoholic beer is still small fry in the UK, with supermarket sales in 2017 worth £37.7m, according to Nielsen – less than 1% of the total beer market (£3.98bn), and less than £1 spent for every adult.

But most things start small – and last year’s figure was up more than 40% from 2015’s total of £26.6m. And the status of the brands in the game make a convincing case that this rapid growth is set to continue.

Heineken entered the market last March with the UK launch of Heineken 0.0, while Budweiser followed suit in November with the 1930s-themed Prohibition. Both of those brands, along with San Miguel 0,0%, launched here in 2015, are running dedicated ad campaigns this month in a bid to grab the attention of Dry January participants.

There’s a big opportunity for products that can claim the consumer pounds that would have gone on alcohol – but in the past alcohol-free beer hasn’t been cut out for the job.

That specific market now looks irresistible for brands: according to a YouGov poll, 3.1 million drinkers in the UK were planning to ditch booze for the month (how many are still off it half way in, we don’t know).

According to figures from the Office for National Statistics released last year, drinking among UK adults was at the lowest level ever recorded. The social trends causing young people in particular to drink less often, more moderately, or not at all, have been well commented on – from the pressure to control your image on social media, to messages about the health risks of heavy drinking finally taking hold.

So there’s a big opportunity for products that can claim some of the consumer pounds that might in the past have gone on alcohol – but in the past AFB hasn’t been cut out for the job. 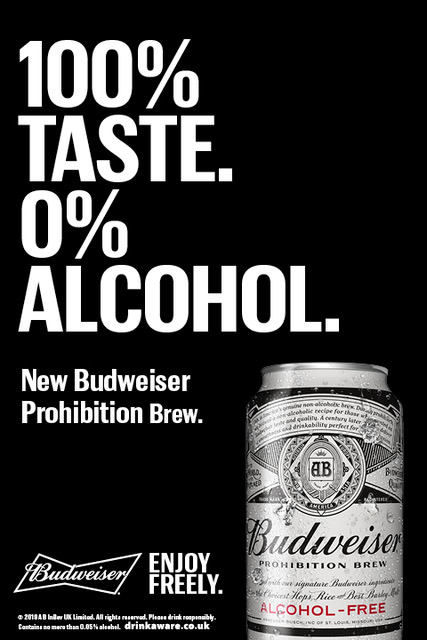 "There’s some barriers in terms of why people don’t drink AFB," Rowan Chidgey, UK marketing manager for Budweiser at AB InBev, says. "The whole proposition of Budweiser Prohibition was to tackle those head on."

This comes across in the fun, historically authentic branding, which harks back to the prohibition era in the US, when Budweiser continued legal production by switching to a non-alcoholic version. The new product, which debuted in Canada and is now being rolled out globally, is made to the same recipe as the 1930s version.

But the biggest requirement for getting the product off the ground, Chidgey says, was to "go very hard-hitting on taste. There’s an underlying belief that people think they can’t enjoy a great product without alcohol."

To remedy this, ads currently running for Prohibition carry the sort of message of not compromising on taste that Pepsi Max and Coke Zero (Sugar) have used over the years.

The underlying challenge for the market, Chidgey argues, is to transition from AFB being a negative choice, that would be entirely about avoiding alcohol, to a positive one about choosing a brand and product that genuinely appeals.

Ilaria Lodigiani, head of global marketing innovation, Heineken brand, characterises this as moving away from a focus on "can’ts" – such as pregnant women and designated drivers – to "don’t want tos", who "like the taste of beer but just don’t want to drink alcohol in a particular moment." 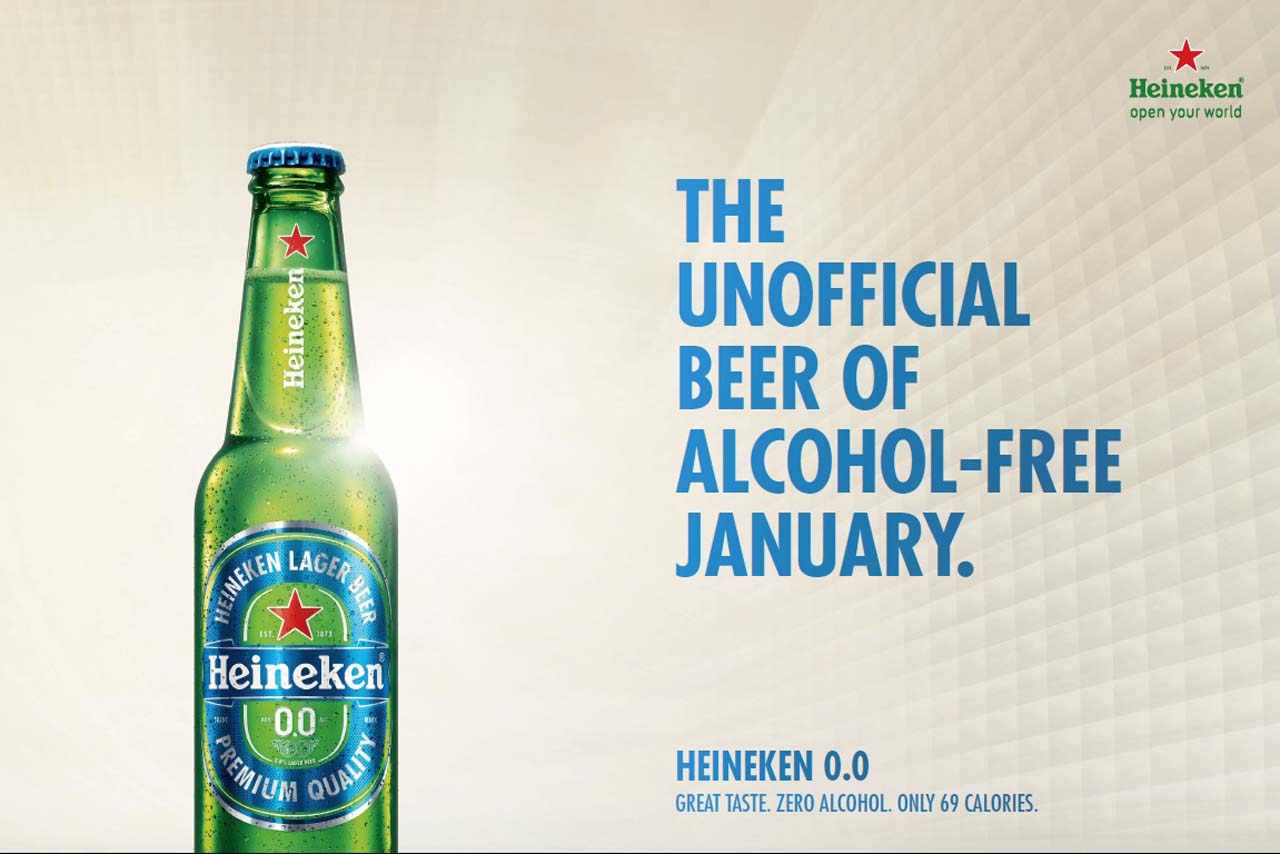 Lodigiani agrees AFB is "seen as something that’s not cool", but believes the brand equity of Heineken can play a big part in transforming perceptions. The business is putting its money where its mouth is: it has committed to spend 25% of Heineken’s marketing budget on 0.0 in the year of launch in every market.

But she thinks the potential for the product is broad. "It’s a zero-alcohol beer, but also very low in calories, low in sugar. The consumer mindset is changing quite a bit – they’re looking for 100% natural products, but with less sugar, less alcohol."

This means, according to Lodigiani, one target will be people looking for healthier soft drinks, who don’t want to consume artificial sweeteners. "And you can cheers with a beer," she adds. "You can’t cheer with a Coke. We’re convinced we can give more fun to the consumer." 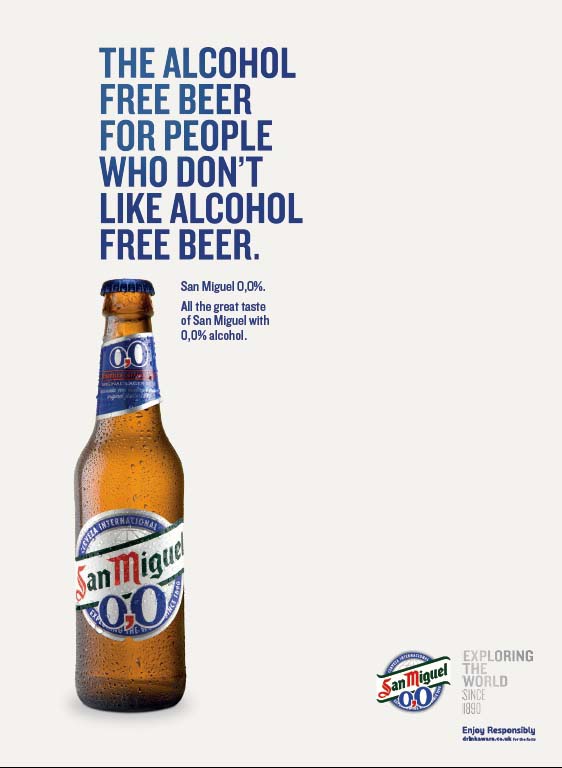 Though San Miguel 0,0% has been on sale here for three years, Liam Newton, vice-president marketing at Carlsberg Group, says 2018 is "the first year we’ve felt it’s of a scale to give it it’s own support." While San Miguel is the priority, it will also be putting some spend behind Carlsberg 0.0% later in the year.

Newton was welcoming of the increased number of brands taking AFB seriously, which promises to shake up the circumstances in which the leading brand, Becks Blue (from AB InBev), accounted for 45% of supermarket sales of AFB last year. "It’s almost unnatural for one brand to have that level of share," Newton says. "I think it will become as competitive in a way as the beer market is."

The UK, Newton points out, is a long way behind countries like Spain, where no-alcohol makes up about 10% of all beer sales. But one barrier to us catching up is that 80% of UK sales are in the off-trade (shops). "At the moment the on-trade is quite limited in its presence," he says. "That’s an area that will be interesting to see." Offering a choice of brands in bars could help kick up demand, he thinks: "It helps it become a conscious choice rather than a default choice."

Of course, mainstream lager brands aren’t for everyone – it’s telling that the third biggest low/no-alcohol brand last year was actually Nanny State, from craft beer giants Brewdog. Another brand tapping into the same trends as Heineken, but with an independent spirit, is Fitbeer, marketed for its nutritional content and isotonic properties.

You realise how pervasive the alcohol industry is. With every single occasion, there’s a drink for it, and to go up against that requires really clever marketing.

One of the venues offering it is Redemption Bar, the vegan, alcohol-free restaurant co-founded by former Virgin group brand director Catherine Salway. Redemption used to offer brands like Becks and Bavaria, but now only sells Fitbeer. Salway says beer sales at her two venues have increased 500% in the last year alone.

The way Salway talks about her experience of getting her business off the ground is testament both to the power of marketing and the massive barriers faced in the past by anyone trying to sell an alternative to alcohol in the UK.

"British culture is changing," she says. "We were lamenting it a few years ago, saying if only we could drink like the Europeans – well, we’re getting there now."

But it has been gruelling; alcohol is baked into every aspect of our culture. "I’ve used every trick in the book to sell the concept to the public," she explains. "You realise how pervasive the alcohol industry is. With every single occasion, there’s a drink for it, and to go up against that requires really clever marketing."

Fitbeer, Salway argues, is a cut above other AFBs because the company that owns it doesn’t do anything else. "We get voted the best alcohol free cocktails in London because that’s all we do," she adds, for comparison.

But Christian Purser, chief executive at Interbrand London, thinks at this point the fledgling industry needs to rely on the heft of established parent brands.

"I’d love to see more creativity around the low/no alcohol lager market," he says "But the biggest thing Becks Blue has going for it is how recognisable the branding is. The further they go from the master brands the weaker those brands will be."

They help to provide confidence, he adds: "The quality cues come from the masterbrand. I think San Miguel is a quality product, for example, and so I’d expect the non-alcoholic beer to be a quality product."

Lodigiani would agree with that assessment – catering to a broader range of occasions is one of the ways she wants get Heineken 0.0 up to 10% of the brand’s total sales within 10 years.

San Miguel's 'Rich list' campaign is back with a social experiment

How Strongbow hopes to crack new markets with global campaign

LoneWolf to install gin and tonic vending machines in Manchester

My side hustle: how I launched an agency and an absinthe brand in the same year

Stay over in the Holland Heineken House for the Winter Games through Booking.com

Brits are drinking away the pain of rising food prices, data suggests

Heineken and A Bathing Ape to create New York pop-up