As part of a branded content campaign called "The Chain", Google and Guardian Labs have used the Pixel 2 to produce a magazine that will go out to Guardian readers this Saturday.

The magazine is a physical expression of an ongoing online content platform that features 10 fashion influencers who each take turns to document their key creative take outs from their daily working lives and moments of influence using the same Google Pixel 2.

The best of the content created was curated for the magazine which will also be distributed at department stores such as Selfridges, cool boutiques and cafés.

"The premise of the ad campaigns for the Pixel 2 have been around asking more of your phone," Graham Bednash, UK consumer marketing director at Google, said. "And the first line in the magazine asks, 'Can you make a magazine on a phone?'." 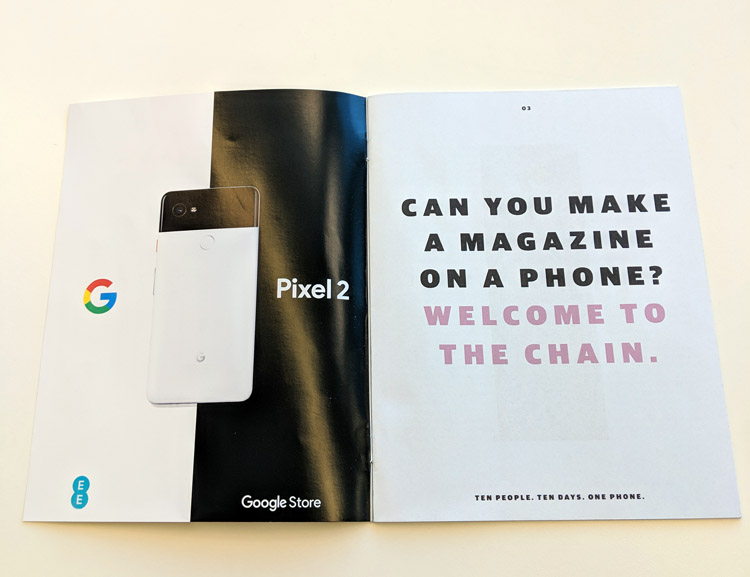 The strategy behind the content campaign as a whole, Bednash continued, is to tap into the fashion industry.

"Fashion is an important area we’re focusing on. It’s the right space for a high-end luxury mobile device. The fashion industry is at an interesting time right now. It's asking questions of itself around gender, body image, the role of the catwalk and the definitions of beauty. We wanted to lean into that conversation," Bednash said.

The branded content taps into this conversation with the careful selection of the influencers featured. These include model and activist Adwoa Aboah, Naomi Shimada, model Kyle de Volle and artist and model Phoebe Collings-James.

The in-depth fashion features, videos and the magazine all explore how changing attitudes have disrupted the fashion industry.

The Chain, which made its online debut on 13 November, was developed in partnership with Essence and OMD.

"The Chain is a perfect example of how Guardian Labs works – with agility, insight and the world-class quality for which the Guardian is known," Imogen Fox, executive editor, Guardian Labs, said. "We’re working with Google to create a series that pulls apart the expected narrative and exposes how fashion has the power to really change not just what we wear, but how we think about the world."

These content platforms work in tandem with an exclusive programmatic campaign, which will deliver bespoke Guardian creative formats programmatically through a collaboration with Essence. Google will be able to exclusively buy and serve ads that use creative assets designed and built by The Guardian's in-house production team programmatically across all the newsbrand's digital platforms.

The Guardian scoops Brave Brand of the Year Award