Most people agree dating sucks. Low-effort apps make it easier, but not necessarily better: if all you have to do is swipe, it takes an exhausting amount of time to foster authenticity. There are too many options, but not enough connections.

Hinge, which arrived in 2013 and at first connected people through mutual Facebook friends, launched a new campaign this week aimed at weary survivors of the swipe-ocalypse. "Let’s Be Real" lands in NYC with a handful of out-of-home placements that ask viewers to reflect on what makes a good date—and how Hinge’s unique approach to matching might create the authentic connection users crave. 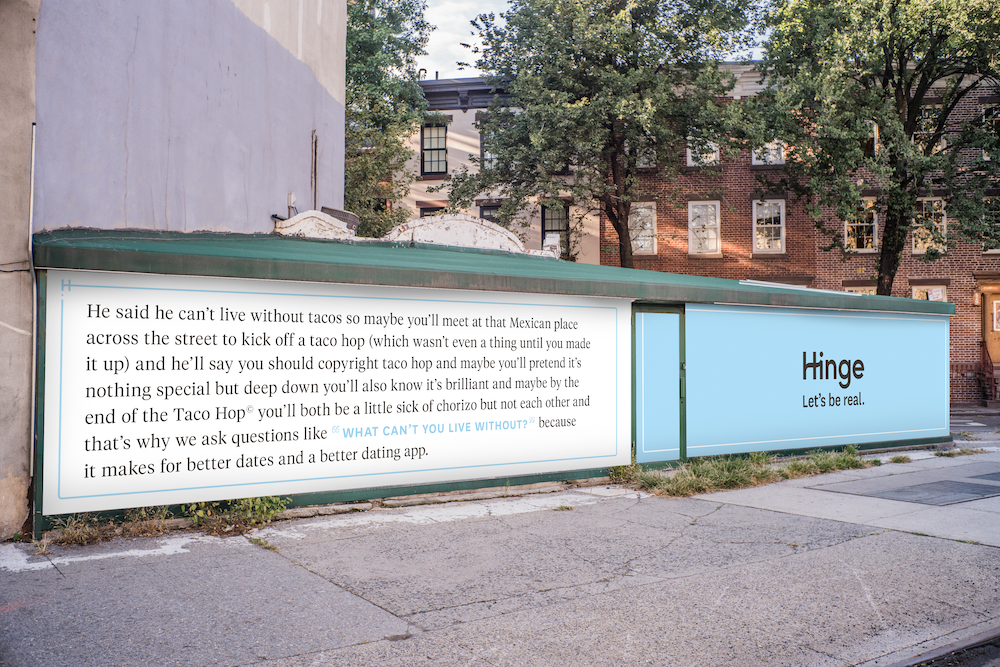 "We’re trying to capture the people who are graduating from swiping service to look for a relationship, who know that means putting yourself out there and being more real and vulnerable," said founder and CEO Justin McLeod. "Up until this point our growth has been organic, through word-of-mouth, so this is our first step out into a marketing campaign."

The billboards and phone booth banners follow a relaunch late last year that cut Hinge staff by a third and rebuilt the app from scratch to move away from competitors. Every feature in the new iteration focuses on meaningful engagement: there are no swipes, liking a profile requires responding to a specific element of a user’s bio, and free accounts get just ten likes a day. "At the beginning it was about being against swipe culture and gamification and superficiality, and as we start to grow we want to shift messaging toward what we’re about rather than what we’re not—rapport, being real and vulnerable," said McLeod.

To execute on this new vision, they partnered with Barton F. Graf, which Hinge marketing VP Olivia Abramowitz had worked with at a previous job. "We’ve forgotten what makes [dating] fun in the first place—the spontaneity, the chance encounters," said the Graf creative team in a statement. "This work attempts to capture that fuzzy feeling you get when you meet someone for the first time and don’t know where the date will take you."

Each OOH placement centers on a prompt that Hinge users answer on their profile, like "What are your unusual skills?" or "What can’t you live without?" Rather than pithy slogans, the campaign features longform, stream-of-consciousness copy that mirrors the meandering flow of a date neither person wants to end. "It’s designed for a non-driving city—you couldn’t read all that and be driving safely," McLeod explained. 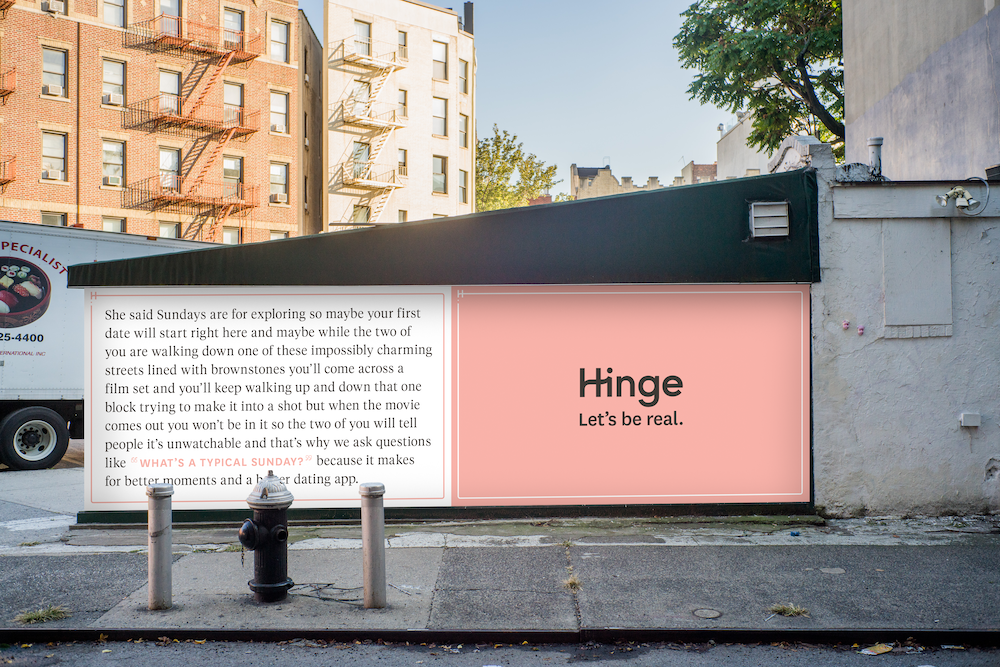 The team picked New York for the initial rollout because it’s their home market, and the two specific neighborhoods—Williamsburg and the West Village—because that’s where the app gets the most engagement. McLeod said the geographic concentration is "an artifact" of how the app originally spread: through his classmates at Harvard Business School, the sort of moneyed young professionals who have in recent years flocked to Williamsburg particularly.

Eventually, Hinge OOH campaigns will appear outside New York. Iin the meantime, the team is working on an expansion into digital, email and podcast ads. "We want to continue to tell these stories for the foreseeable future but build twists," McLeod said, like incorporating real user experiences into messaging. "Over time, I imagine we’ll revolve the campaign around stories of how these prompts work and why they lead to great dates."

Stubborn politicians get flooded by women's health facts via fax