Being old yet muscular helps, but the brand says the octogenarian embodies the Chinese zeal for self-improvement and overcoming limitations.

Reebok has teamed up with China’s "hunkiest grandpa," 81-year-old Wang Deshun, while also leveraging the influence of two other local brand ambassadors: actress Yuan Shanshan and actor Wu Lei. Both of them star alongside Wang in Reebok’s "Be More Human" China campaign (see above), launched earlier this month—also its first-ever TVC in the market.

The campaign represents the brand's bold new drive to associate itself more with pull-up bars, kettlebells and medicine balls than basketball hoops.

Exactly 10 years ago, Reebok's biggest Chinese campaign was all about basketball, starring Chinese icon Yao Ming alongside his quest for Olympic success at the 2008 Beijing Games. The campaign was so reliant on the force of the athlete, that the slogan at the time was also all about him: "Fuel Yao’s Unlimited Power."

"We saw that there was a groundswell of a change of mindset to fitness and decided to divest some of our sports assets at that time," he said. "The global movement of cross-training and crossfit has been our catalyst since then. We thought that we belonged there." It's a stone's throw away from where the brand's heritage lies in running and step aerobics, he added.

It was not easy to transition to become a brand focused entirely on high-intensity interval training and calisthenics, he said.

With innovations in product cushioning technology and by forging exclusive global strategic partnerships with some of the biggest and most influential names in the industry, such as CrossFit, Spartan Race, Les Mills, Ragnar Relay and the UFC, Reebok has gradually carved out a unique position for itself in this fast-growing segment. The new "Be more human" campaign is Reebok's call to inspire Chinese people from all walks of life to strive to achieve their full potential through fitness. That's why Grandpa Wang, a fashion model and artist who only seriously got into fitness at the age of 70, makes sense. It's not a stretch to say his example has helped reshape China’s views on aging.

The new slogan was unveiled globally in 2015, with the three sides of the brand’s Delta logo representing the physical, mental and social transformation experienced from living a fitter lifestyle. But the brand platform has only made its way to China now, after the brand took time to consider the market's young fitness journey and after one year of consumer research.

Chinese consumers are now more eager to live healthier lifestyles, but beyond that there is a national attitude among them that has impressed Wittman. "They are very open, very ambitious generally," he said. "Not just in fitness but in life. The entrepreneurial streak I see in young Chinese business owners opening up gyms is a testament to their openness and ambitiousness."

The brand's 2015 "Freak Show" global spot was showed to Chinese test groups as part of the one-year research, and Wittman's team was again surprised at how the almost-fanatical characters actually had appeal broader than expected and were able to resonate with all classes of Chinese consumers, Wittman said.

"Both the spot and the sport can be intensive, showing Americans flipping tyres and doing pull-ups," he said. "We thought this was not going to work in China. But if that was resonating with people who didn’t even work out ... yet."

Grandpa Wang stands out among Reebok’s two other arguably-predictable brand ambassadors as he is the only one who has multi-generational charm. A pioneer of so-called body sculpture, Wang’s chiseled physique and youthful good looks brought him international acclaim after he took to the catwalk at Beijing Fashion Week in 2015. 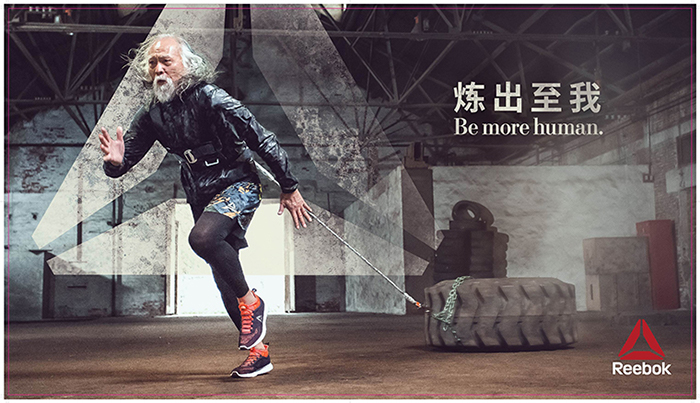 "We believe that these guys can help us spread relevant messages and make consumers want to dig deeper into the Reebok brand," Wittman said. "They span age and gender, along different fitness journeys in their lives. This is powerful and fresh for China. We want to make sure these guys are all authentic, with real stories of their own, so it wasn’t easy to pick them because China is still young as a fitness market.

"A lot of brands call celebrity agents and ask, 'Does this celebrity work out?' You get a pretty clear direction from that stage and then shortlist some. Upon meeting the three, I knew within 10 minutes they were the right people," he revealed. 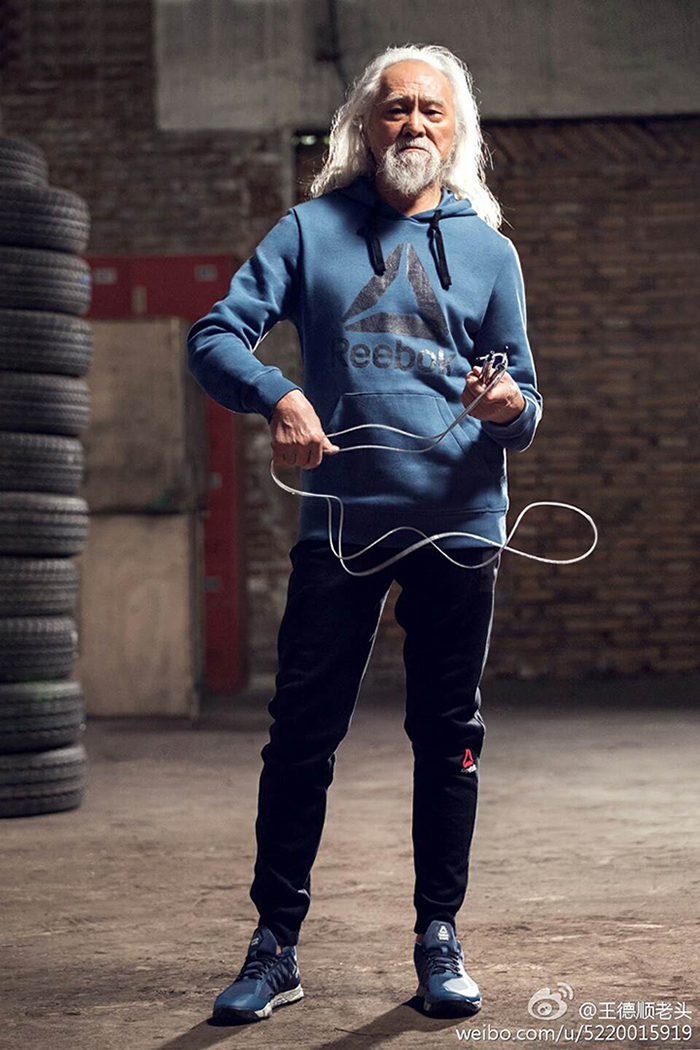 Together with Reebok’s exclusive retail partner in China, Belle International Holdings, the brand has opened a total of seven of its signature "FitHub" stores across China, including in Wuhan, Qingdao and Hangzhou, as well as a new retail store in Beijing in January 2017. Reebok plans to open a total of 500 FitHubs by 2020, with 50 scheduled to open this year.

At present, Reebok focuses on three key categories: running, training and classics. With running in particular experiencing an unprecedented surge in popularity in China in recent years, the category will also be a key focus for Reebok in 2017 as it leverages proprietary, cutting-edge technology such as FloatRide to help runners perform at their very best.

Can Reebok finally shape up?