The story behind the old-timey brand's baffling all-MLB media strategy, and what it says about modern media planning

Yes, W.B. Mason, the office-supply company with the wacky ads and carnival logo that are absolutely everywhere during baseball season — and seemingly nowhere the other five months of the year.

So ingrained in baseball is W.B. Mason’s advertising that most fans don’t question its presence until someone points it out. Why does an office-supply company advertise — exclusively, it seems — to baseball fans? Do office-supply managers not watch other sports? Or any other shows at all? Are the lion’s share of staplers, coffee pods and file folders ordered between April and October?

The answer, it turns out, is none of the above. W.B. Mason just likes baseball. And as media strategies go, it appears to be doing the job. Though not, perhaps, for the usual reasons. 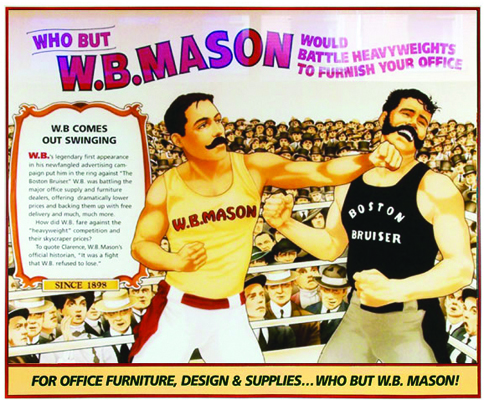 For most of the 20th century, W.B. Mason was a local supplier of office furniture that no one had heard of outside of sleepy towns on Boston’s South Shore. But in 1986, the company handed its account to TJ Clark, a local agency that has since gone out of business. Paul Steven Stone, a creative director who had recently arrived at the agency from Arnold & Company (now Arnold Worldwide), reimagined W.B. Mason’s eponymous founder as a mustachioed globetrotter — alternately a prizefighter, a matador, even a demigod — in a series of ads that surely served as inspiration to later campaigns like Dos Equis’ The Most Interesting Man in the World. 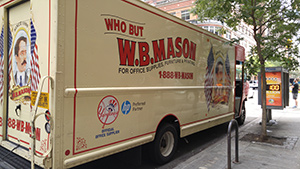 The creative strategy was to cultivate the image of a scrappy upstart, a real-life Dunder Mifflin offering the personal service the big box stores can’t. And it was so successful that it began a decades-long partnership, and eventually, Stone joined W.B. Mason as director of advertising from 2002 to 2012.

"The whole campaign is cornball. It’s corny, it’s Americana, and it’s not taking yourself too seriously," Stone said. "The things that we see as important, if we clearly communicate that they’re important, nobody’s going to question it. Once we’d established who and what we were, we had license to do whatever we felt we wanted to, within certain bounds of course. And the public just bought it."

The rebranding marked the first appearance of the wavy, circus script and the "Who But W.B. Mason" slogan that currently graces ballparks and the company’s ubiquitous fleet of 600 Ryder trucks.

Baseball entered the picture in 1999, when the Boston Red Sox ended a 50-year moratorium of advertising on its left-field wall, the legendary Green Monster. As Stone tells it, Lou Gorman, the former general manager of the Red Sox, began asking Mason CEO Leo Meehan to place an ad there, partly because he didn’t want an advertiser that would be controversial, like an alcoholic beverage. In 2003, Meehan relented, and the Mason logo went up. "It was pretty easy to work out the deal," Stone said. "It was one of those situations where everyone in the room wanted it to happen." Still, he’s careful to clarify that the move wasn’t made on a whim. "There had to be some sort of perceived marketing value to it or we never would have done it," he added. "We wouldn’t have done it just to do it."

It was a hit. Or at least, everyone felt like it was. Profits continued to rise, despite consolidation and competition in the industry. And now the company’s name was associated with the home team. "There was a real sense that this was signaling the arrival of W.B. Mason," Stone said. The company relied on its strong salesforce to drive growth, which took pressure off the advertising. "We never went to a bottom-line figure that was on some projection," Stone said. "We always just sort of flew by the seat of our pants."

After the success at Fenway, W.B. Mason duplicated the effect at ballparks that coincided with the company’s expanding footprint across the East Coast. The Yankees. The Mets. The Phillies. The Pirates. The Indians. 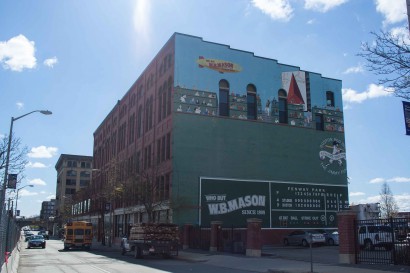 Baseball became part of the internal lore of the company. W.B. Mason’s headquarters in Brockton, Massachusetts was covered in a Green Monster mural. "It’s a family-run business, and it has no apologies to make for allowing itself to feel good about the things that it does and pursue the things that will make it feel good," Stone said. "This is all advertising, a company spending its money to feel good about itself and to make the public feel good about doing business with them."

So baseball is a comfortable fit for the brand, both geographically and thematically. And certainly baseball — one of the few American pastimes Americans still prefer to watch live — is a good way to reach a lot of consumers. The Yankees-Astros game Oct. 6 was the highest-rated MLB game for ESPN in 12 years, garnering the network an average audience of 7.6 million viewers, not to mention the 50,000 fans actually in attendance. And baseball’s ties to the country’s idyllic pseudo-history have tugged heartstrings since well before Norman Rockwell institutionalized it.

But do stadium ads and endless YES Network commercials target the right eyeballs for a brand that presumably wants to reach office supply managers and procurement specialists — not exactly a mass-market demographic?

Maybe not, according to Stone. "I’m obviously aware that we had a whole segment of the audience that we don’t reach," he said. But the advertising budget was never large, and it was a cost-effective way to build name recognition. Besides, W.B. Mason is privately held, and the guys in charge loved baseball. (They don’t, however, love returning reporters’ phone calls or emails, as we learned when researching this article.)

The strategy works because it’s probably not about selling office products, but about differentiating the company, said Greg March, CEO of independent media agency Noble People.

"WB Mason is selling the same stuff as Staples," he said. "There's isn't much difference I bet." What W.B. Mason really sells is customer service. And when you’re in that business, there are other perks to consider.

"These 'in stadium' deals typically come with tons of tickets and opportunities to entertain clients," he said. "It could be less about W.B. Mason not scrutinizing every dollar, but rather them being very strategic through a different kind of lens than we 'ad experts' often think about."

While both of Mason’s home teams lost their wild card games this year, the Mets might buck the trend. They’re ahead in the National League Division Series, and they play again tonight at Citi Field, another one of W.B. Mason’s favorite ballparks. Either way, you won't be seeing many W.B. Mason ads until April.

Meet the second Most Interesting Man in the World

From suspension to comeback to goodbye: Ron Berkowitz on being A-Rod's publicist

Capitol offense: How the Bullets could help rehabilitate the Redskins brand

What brands can learn from the NFL coming to the UK

Is Formula 1 sponsorship a fast track to Asian hearts?

MLB 'This is Baseball' by Anomaly