The activist group is shifting its media strategy to include more demonstrations after Lamar Advertising Company issued a boycott on its business.

Today, 40 activists representing People for Ethical Treatment of Animals will wear black and white body paint and lie down in front of Orlando’s City Hall to protest the 40 orca whales that have died at SeaWorld. The demonstration is similar to one that took place last month at the Los Angeles County Museum of Art, and it’s just one of many planned for the remainder of the summer.

Once considered synonymous with these attention-grabbing stunts, PETA has actually shifted its marketing strategy away from them in recent years. Instead, it's turned to outdoor billboards, including ones of celebrities claiming they’d rather go naked than wear fur and another praising former target Taco Bell for its vegan bean burrito. In fact, according to Kantar Media, PETA increased its overall ad spend from $976,000 in 2015 to $1.78 million last year.

But the organization has been forced to return to its activist roots in 2017, upping its street demonstrations by 167 percent (from 143 in 2014) because Lamar Advertising Company issued a company-wide ban on all PETA business. According to an email provided by the group, SeaWorld CEO Joel Manby pressured Lamar executives to drop PETA’s creative following a 2016 billboard aimed at the theme park.

"Just heard back from corporate. They are still a no on PETA. Whatever happened relating to SeaWorld last year is what they are saying," Raleigh-Durham, NC sales account executive Mike Cherry wrote to PETA Senior Media Placement Coordinator Matt Freeman in May 2017. Both Lamar and SeaWorld executives did not respond to requests for comment. 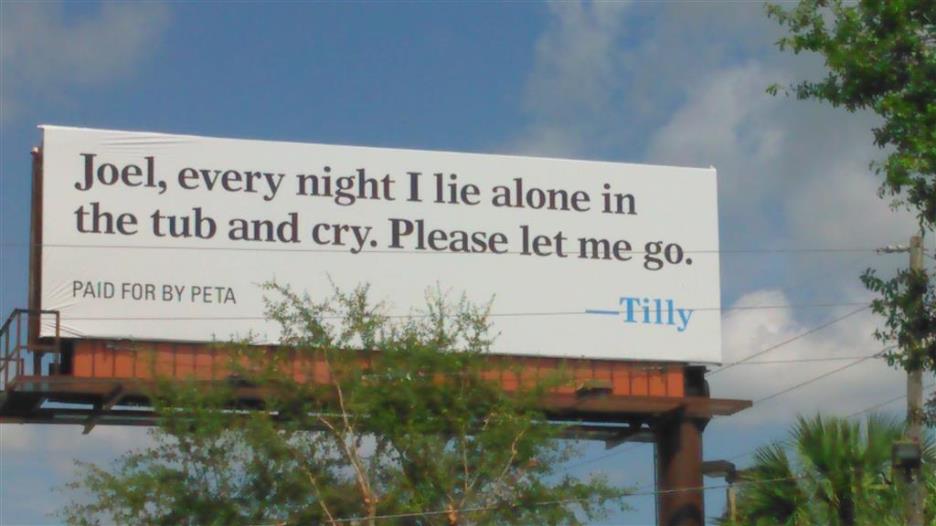 The billboard in question featured the copy, "Joel, every night I lie alone in the tub and cry. Please let me go. –Tilly," referring to Tilikum, a captive orca that was the subject of CNN Films' 2013 documentary "Blackfish" and died in January of a bacterial infection. The same year the billboard ran, SeaWorld reported a $12.5 million net loss in revenue and 2 percent drop in attendance.

"I think it's highly suspect that we're being censored in cities where SeaWorld is a business," said PETA VP of Communications Colleen O’Brien. "But we also find it encouraging because SeaWorld is fighting so hard to keep our ads from going up, it means that they're nervous. It means that we're winning."

PETA may be winning, but Lamar’s ban has made the group work twice as hard. "There's a real switch in how now we get these messages out, whereas previously, we could run billboards for a month or longer and they'd be seen," she added.

In addition to the increased protests, alternative advertising methods include sidewalk decals in Washington D.C. (see below) and Oklahoma City as well as aerial banners in Orlando and San Antonio, two cities where SeaWorld operates. PETA is also on track to increase its Facebook ad spend by $70,000 compared to 2016. 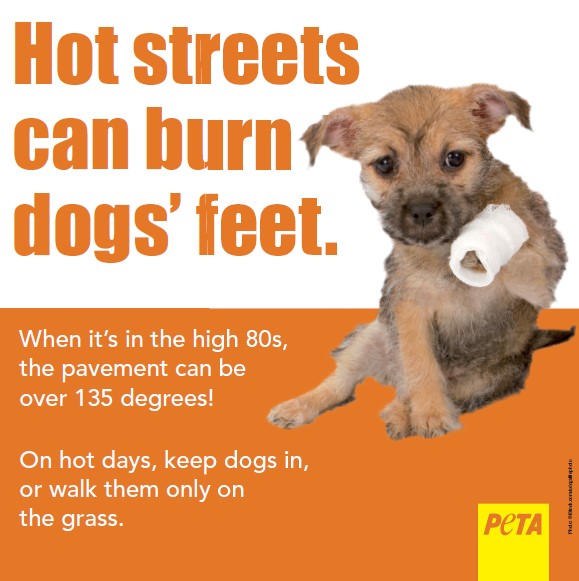 And there are smaller billboard companies that still run PETA’s creative.

Grey Vick, owner of Grey Outdoor, has been working with the group since 2014. He said he understands "why a publicly traded corporate environment would take this stance" but that Lamar’s loss is to his advantage as he’s picked up more business. Plus, he’s only had one animal agriculture client complain about a PETA-placed billboard.

"I hope to continue to work for them for many years to come," Vick wrote in an email. "I like the controversial [billboards] because it gets them and us a lot of attention."

That said, O’Brien continues to wish that Lamar will take PETA back. "We would like to convince Lamar to run our ads. We even offered to give them input on the artwork, so that everyone would be happy," she said. "I'd like to keep trying."

Why PETA is promoting Taco Bell in its latest advertising