England are out of the men's World Cup but with pride restored and a new era ahead of them. So which sponsors are coming along for the ride? We track the departures and arrivals from their line-up and analyse where the new-look England might lead them.

That’s where Vauxhall could have been, but the outgoing headline sponsor threw it away when it lost faith last year and decided its association would end after this World Cup (read on below to see what it got out of the investment).

Can you blame Vauxhall? After signing up in 2011, the brand at first saw England progress to the Euro 2012 quarter-finals but then got hit by the one-two punch of the team finishing bottom of their World Cup 2014 group and supinely going out to Iceland in Euro 2016.

"No regrets – it’s great to go out on a high," Vauxhall said before yesterday's match. But it’s not hard to imagine clenched teeth when you consider how appealing England’s redemption story and new momentum is to a successor headline and/or automotive sponsor.

Another brand bowing out, but with a replacement already confirmed, is Carlsberg. With Stuart Pearce-esque levels of longevity it has clocked up 22 years as official beer of the England team, but plumped for pastures new this year.

Carlsberg’s successor – somewhat ironically, with all the talk of the England team having "reconnected with fans" – is Budweiser. While it might be difficult for fans to imagine the emerging cult figure of Yorkshireman defender Harry Maguire celebrating with the Amercian brew, Budweiser has already made inroads into football with its ongoing beer sponsorship of the FA Cup, which started in 2015.

Carlsberg and Vauxhall’s departures leave Mars Wrigley as one of the few veterans left in the sponsorship squad. Having first joined up in 2009, the company announced in March it had recommitted its future to England until 2022.

The deal was illustrative of the switch in direction at the Football Association, which in January set out plans to become a more inclusive and diverse organisation and plough more money into the game’s grassroots as well as women’s and disability football.

Mars Wrigley and the FA said the sponsorship will "reflect the ambition of both organisations to drive the diversity and inclusion agenda", for example by extending to the England Women’s and Disability teams for the first time. In addition the FA Mars Just Play programme, which has already provided 2.7 million opportunities for adults to play football, will extend its remit to a broader range of participants, while Mars Wrigley will also provide 200 coaching bursaries with a particular focus on increasing representation among women and the BAME community.

It feels as if Southgate’s England team is playing its own small part in the diversity agenda. While, in truth, the men’s team has been colour-blind for years, the surge of goodwill generated by its current on-field performance has led commentators to praise its diversity, youth and dynamism. (Progress in the tournament will also have helped fans further come to terms with Nike's displacement of Umbro as kit supplier, in a deal running to 2030.)

Lidl is a newish sponsor which has made youth a thread of its creative, with a TV ad in which kids exhort players like Kyle Walker and Raheem Sterling to celebrate goals better. This echoes the way its partnership, which was agreed to run from 2015 to 2018, supports opportunties for children to receive professional coaching. One wonders if Tesco, from which Lidl took over, might be interested in breaking back into the camp.

It’s certainly the case that England's wilderness years haven’t exactly had Britain’s blue-chip brands clamouring to get a piece of the action. British Airways, an erstwhile partner, notably snubbed the chance to fly the squad to the 2010 World Cup in South Africa and in 2016 signed up as the official airline partner of athletics’ Team GB.

Other sectors notably absent from the FA’s roster include banking (Nationwide was headline sponsor for 11 years before Vauxhall) and cosmetics (despite the increasing reach of Nivea and Dove into football and rugby).

However, telecoms looks like an area with further potential, with EE in place from 2014 to 2020 as the headline sponsor of Wembley Stadium and the telecoms supplier to the men’s team. BT, which acquired EE back in 2016, is a partner of the women’s team and also the communications services provider to the FA’s training complex St George’s Park. Should BT be looking for ways to transition towards absorbing and retiring the EE brand, there are worse ways to do it than a long-term sponsorship deal covering both brands.

The technology sector is represented by LG, which was signed in 2017 for three years as official digital screen partner of the England men’s team, the FA Cup, Wembley Stadium and St George’s Park.

The remaining old stagers are M&S, the official tailor since 2007 that has been milking Southgate’s waistcoat for all its worth*, and Lucozade, which has been officially glugged by the likes of Steven Gerrard and Harry Kane also since 2007.

It is not clear at this stage what date each brand’s current deal runs to. England’s commercial team were unsurprisingly hard to reach this week, but enquiries to Lucozade were stonewalled. "The terms of our contract are commercially sensitive, but we are proud of our well-established, long-standing relationship with the FA," a spokesman said.

It seems unlikely that the energy drinks brand will let its involvement lapse, particularly given its need to reassure consumers uncertain about its new reduced-sugar formula and the investment by Lucozade and Ribena chief executive Peter Harding in a £30m "Made to Move" campaign to inspire a million more people to do exercise.

One thing is sure – FA chief executive Martin Glenn and group commercial and marketing director Mark Bullingham will return from Russia in a stronger bargaining position than for many years.

Vauxhall on its England and home nations sponsorship

When the car manufacturer replaced Nationwide as headline sponsor of the England team in 2011 it planned to promote its credentials as an 'aspirational British brand' and transform itself from a 'follower brand' into one 'loved' by car buyers. Here's how it feels as it bows out seven years later.

What has Vauxhall done to highlight its sponsorship of England during the current World Cup?

Our sponsorship allows us unprecedented access to the England team, whether it be through tickets to pre-tournament qualification games and friendlies, access to training, interview/activation time with players and England team branded media and training kit as well as home game in-stadia branding and perimeter TV facing LED. LED creative is a fantastic drive to Vauxhall channels with a considerable increase in visits and leads vs the previous non match week. The sponsorship is used primarily to drive brand consideration. Our ethos for the sponsorship has always been to ensure this access and insight is given back to fans. We’ve also been using the sponsorship internally with our staff on the production line, across our retail sites and within our Head Office to reward exceptional performance and engage employees with the business.

What has the Vauxhall brand got out of its seven-year association with the home nations? 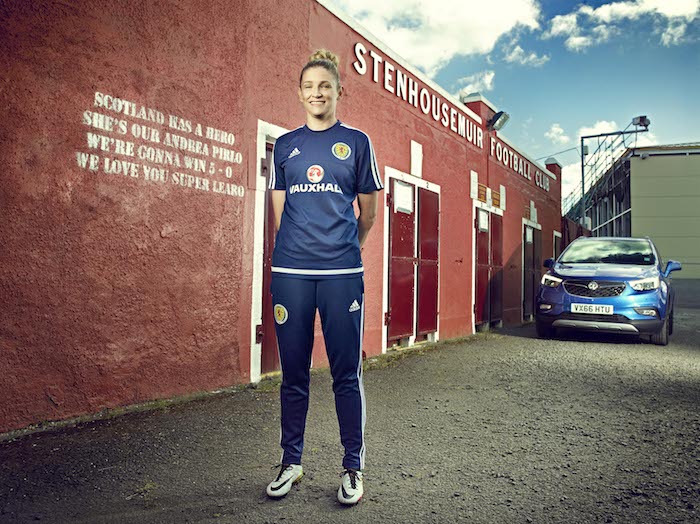 A long relationship with the FA allowing us unparalleled access to all four Home Nation teams, England, Scotland, Northern Ireland and Wales from grassroots up to senior levels, men and women. The association has helped us ensure our vehicles are front of mind to new customers and Vauxhall’s brand consideration is improved, in turn, encouraging sales.  Initially the sponsorship was born out of raising Vauxhall’s awareness, which by sponsoring all Home Nation teams, allowed us to connect our retailer network to each sponsorship property.  In 2014 there was a change of direction were brand favourability and consideration was key, this is where we introduced our campaign platform #GetIN.  Our latest wave of research showed a considerable uplift for England in consideration from 39% (general Public) to 55% (those who were aware of our England sponsorship). Word association to our brand has also positively increased bringing out reliability, Britishness and good value as key attributes.

Can we expect to see any more links between Vauxhall and the England team after the final kick of the World Cup? What form might that take?

Vauxhall’s sponsorship will end on 31st July after the World Cup in Russia. There will be no further on-going activity.

Any regrets about ending the England headline sponsorship just as the team's performance improves?

Just like the England fans up and down the country, we’re rooting for the England team to ‘bring it home’. It’s great to go out on a high. No regrets, we’re proud we have been alongside the team for the seven years leading up to this success at the World Cup in Russia. After such a long relationship with the FA, we will now take the time to refocus our sponsorship and grow the Vauxhall brand even further and explore different routes to market.