Why did Diwali get picked as the launch day for Christmas ads? The average 90%-white ethnic composition of the agency teams behind this year’s work is your answer, according to Engine Creative's Alpesh Patel.

It's fucked up that Christmas blockbuster ads came out on Diwali.

Experiencing this exclusion first-hand had me asking how adland managed to overlook the largest visible ethnic minority population in the country.

Had the agency teams asked any British Indians about the date, or even Googled it? It made me curious about the diversity of the teams behind this year's crop of Christmas ads.

Adland rightly celebrates the brilliance and craft that goes into every ad created for the season. But there is an elephant in the room, and it's about time to point it out.

It doesn't take much to see on social media how our "inclusion"-infused Christmas work lands with the nation. It brings out the "I'm not racist but" brigade, who ask "Why, when black people make up 3% of the UK, are they in about 80% of the ads?".

On the other hand, Facebook for Business also published a report revealing that 54% of minority ethnics don't currently feel represented in advertising.

When questioned on this representation gap, our defence as an industry tends to be to point to improvement in on-screen "inclusion". The problem with this is that, at worst, we're solving racial diversity issues in casting and passing it off as "inclusion" and, at best, we're making our own interpretation of how a minority might feel. I am not saying Engine is perfect either, no agency is. We all collectively have a long way to go to reach the truly diverse workforces envisioned by BRiM and other outreach initiatives.

This shortfall became obvious when I looked at the teams behind this year's Christmas ads. Below is a broad breakdown of the diversity of the agency teams credited on 28 different Christmas ads. The data is limited by a binary interpretation of race. 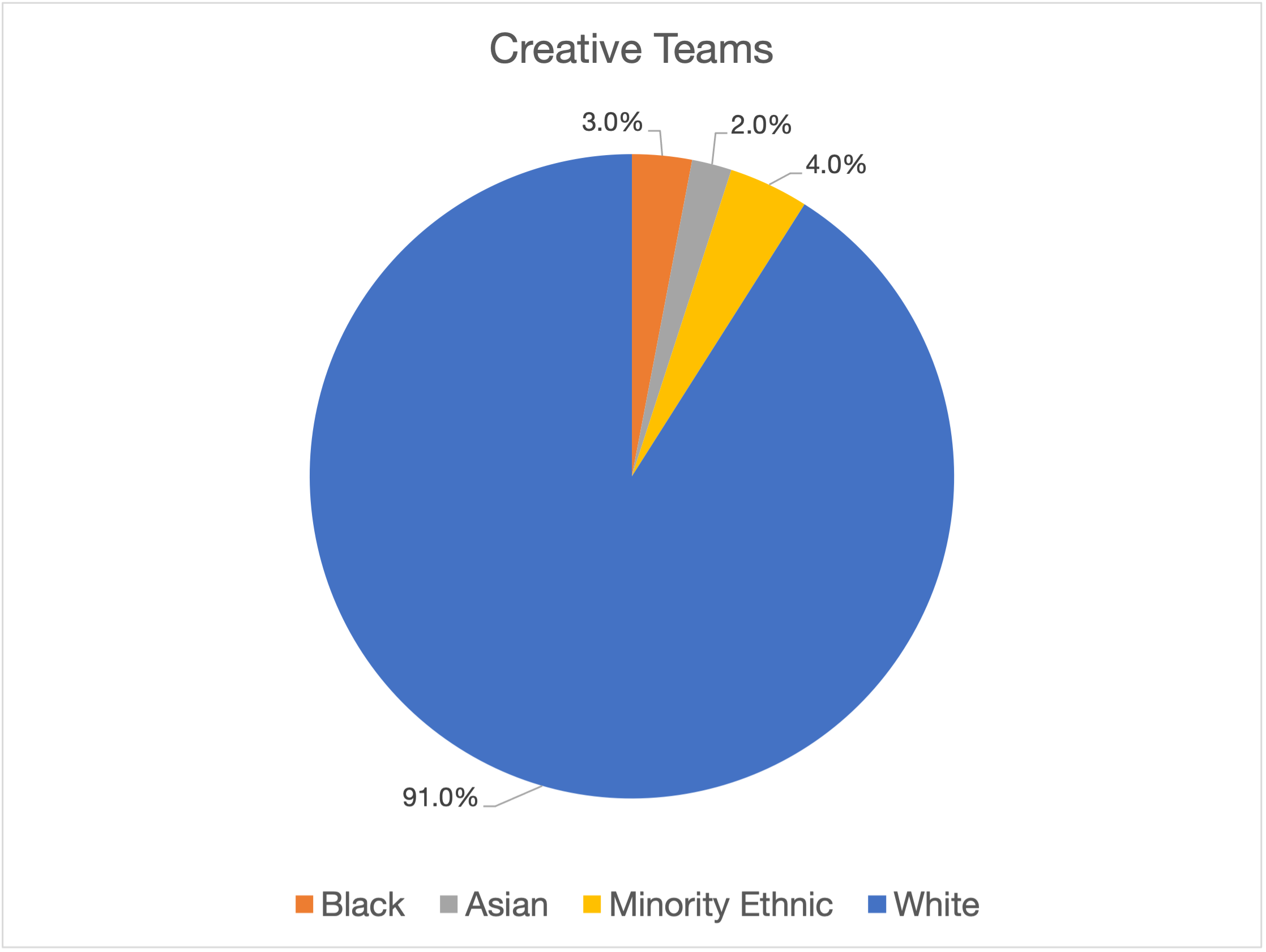 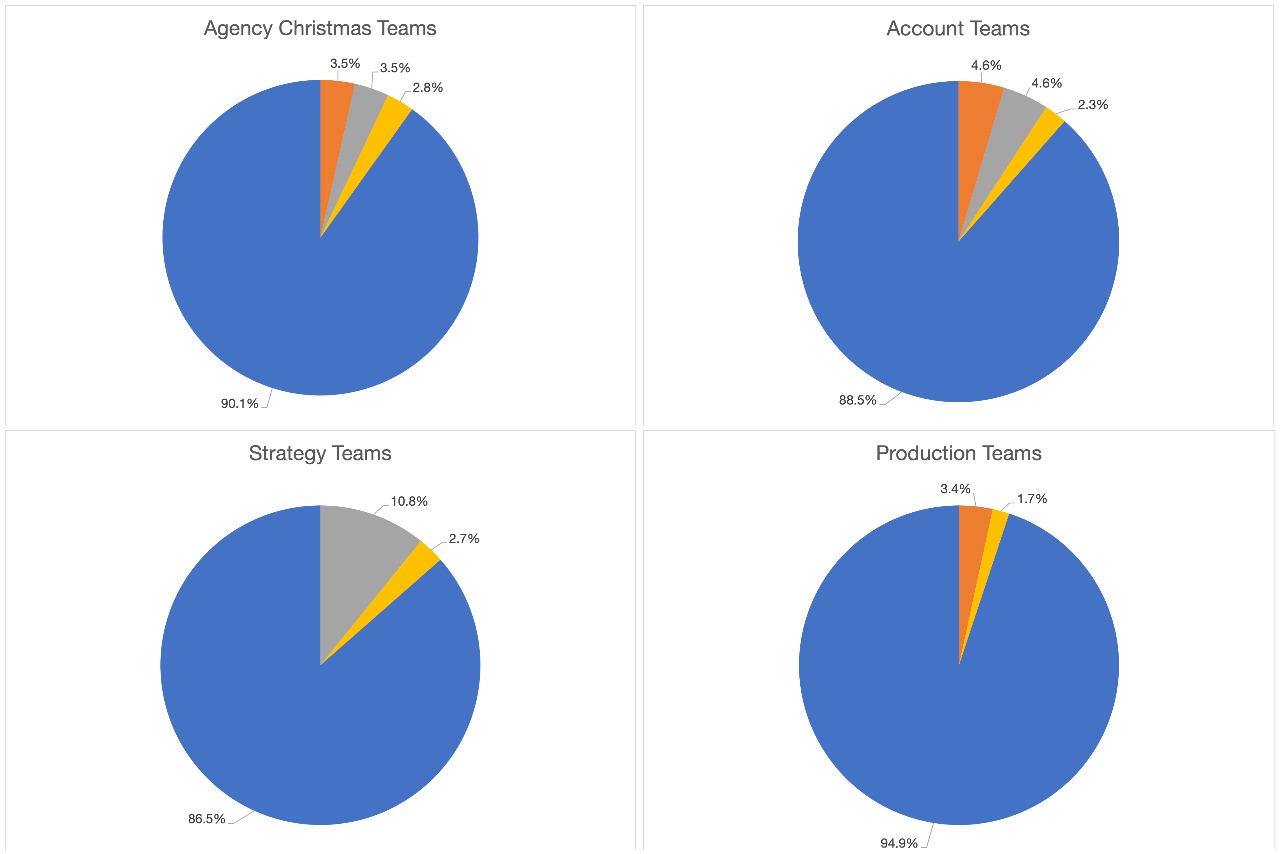 After two years of "inclusion", it is still firmly a White Christmas. We have only 9.9% diversity when it comes to delivering Christmas ads. It's even more dire when you consider that London, where most of adland is based, has an ethnic diversity of 40.2%. It's clear that representation is changing far faster in front of the camera than behind it.

There is a shameful irony in failing to have multi-ethnic teams delivering Christmas while still attempting to be authentically representative in the work. According to BRiM, 25% of marketers said they rarely or never take steps to ensure there is Black representation in key roles across the creative process.

It's no wonder we make crude interpretations of how a different race might act or overlook important multicultural events for the launch of our Christmas ad. It's not surprising when the rest of the nation questions our performative inclusion. The worst part is that we're placing minorities as sitting ducks at the very front of the nation's racist "culture war".

It's cool that it's trendy to be "inclusive" but you should be disappointed at how little has changed in our industry. Christmas being launched on Diwali is a microcosm of a much bigger picture. While the industry is taking measures to be more inclusive, it's incredibly easy to make exclusionary mistakes when you aren't representative in the make-up of your teams.

Please don't tell me you can't find talent among minorities. If you can't, maybe that says more about you than it does about minorities. Speaking to underrepresented people within agencies, they don't just want to be the sounding board for performative inclusion, they want to be included in making great work.

It's sad to see that the All In survey found 32% of Black, 27% of Asian and 26% of minority ethnic respondents are likely to leave the industry due to lack of inclusion.

Perhaps next Christmas, instead of a crude and tokenistic approach to diversity, try working with a diverse multicultural team. You'll probably find more authentic insights, truth in your representation, and you'll sure as hell avoid launching your Christmas blockbuster on Diwali.

Alpesh Patel is a senior strategist at Engine Creative

Which retailers won the Christmas campaign battle on social media?

Santa has some new helpers: why brands will flock to TikTok influencers this Christmas