For 101's first campaign for Zoopla, Augusto Sola and Ryan Delehanty decamp to Costa Rica to show how hermit crabs are as mad about moving house as the UK public.

That was how our script started when we pitched to Zoopla.

Weeks earlier, Zoopla had come to us with the goal of becoming the first name people think of when it comes to property, and our answer was a very detailed treatment about… crabs.

Having met the clients a year previously and discussed ideas, we were able to jump right into executions. We spent the next three weeks refining scripts, drawing crabs, researching crabs, defining what makes a "cute" crab and finding the best house-to-shell proportions for hermit crabs, which move between scavenged shells. You know, typical pitch stuff. 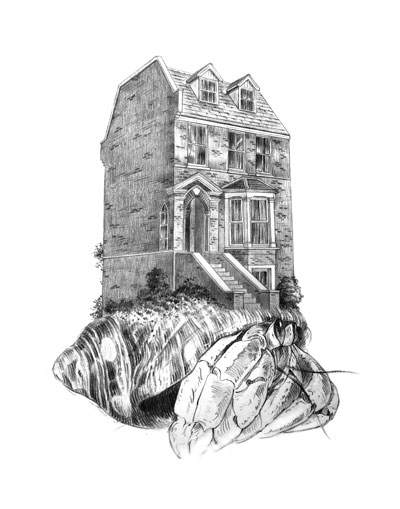 And the Zoopla team loved it!

But there’s a reason there aren’t many hermit crab-based films. They’re not particularly good on camera. They’re erratic, incapable of being trained, only active for five hours a day and most of them are weird-looking.

But, despite all this, we still wanted to shoot the ads for real. And after speaking to wildlife photographers, marine biologists, producers from the BBC’s Planet Earth series and anyone else vaguely connected to the world of hermit crabs, we started to believe it could be done.

Now, all we had to do was find crabs that were cute but big enough to put a house on, make shells with houses on top that they would accept, and get them to stand still and walk in a straight line together. Easy.

That’s when production company Riff Raff came on board. They started by scouring the world for crabs. They searched Thailand, Belize, Mexico and Peru (where the crabs look like blue aliens) before eventually settling on some crabs from the Caribbean side of Costa Rica.

Then special-effects company Artem got involved. We shipped a shell from Costa Rica; they laser-scanned it, made a cast replica that was the same size and weight as the original (but with a crude house on top), sent it off to Costa Rica and crossed their fingers.

Meanwhile, the marine biologists were helping us cast our crabs from the ones they had under observation.

This helped us plan which crabs would be right for which roles. But none of that mattered if they didn’t get into the damn shells. And that responsibility – all the hopes of our shoot and the entire campaign – rested on the shoulders of Crab 8. Literally. 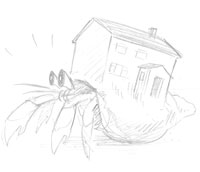 It was late afternoon in Costa Rica and really late in London. We had a live broadcast of the extremely nerve-racking/boring event: two hours of watching a crab looking at a shell. Looking, crawling, looking and then… our crab climbed in and hid. Success! But then it wouldn’t come out. More waiting. Fifteen minutes later, it popped its head out and walked around with a house on its back, like it was no big deal.

Now we knew we weren’t totally screwed. So, over the following weeks, Artem continued to turn crude pencil drawings into 21 amazing little shell-shaped art pieces. They finished just in time to hop on a plane to join the production team in Costa Rica a week before the shoot.

Cut to the reggae-drenched town of Puerto Viejo. The team, our marine biologists and khaki-clad director of photography Doug Allan spent the next week waking up at 4am to the sweet sound of howler monkeys. They were only supposed to recce locations and prep things but, since they had everything they needed to shoot, they shot (which was fortunate, as the weather turned the next week and flooded one of our locations).

Then came the actual shoot. When we needed the crabs to stay still, they walked. When we needed them to walk, they stayed still. Someone along the way told us the crabs would write their own scripts – and they did. Every five minutes, we switched out the crabs so they didn’t get tired or hot. It was really boring – but then they’d do something perfect. We had to be flexible, adapt to their behaviour and be very patient. For five days, in a tropical paradise. Poor us.

We returned to London, where we reviewed the rushes and scratched our sandfly-bitten legs in unison. That’s when we decided to change the entire launch script. The script we shot was one scene with three crabs but, thanks to the amount of footage we had, we decided to try to launch with a film that showed a world of crabs, all of them as crazy about moving house as the people of Britain.

We presented the new idea and Zoopla agreed with us. As the old maxim goes, you write one thing, shoot another and edit another.

Once the edit was approved, an army of rotoscopers and online magicians at MPC gave our crabs a CG makeover to get them TV ready – and finally the spots went out.

We still have five ten-second ads and a whole new 30-second one to finish. So we better get back to it.