As states take siege on the LGBTQIA+ community, brands need to protest with their wallets as well as their words.

It’s pretty clear that consumers today can spot purpose-washing by brands from a mile away. They want the companies they buy from to support their values and communities – not just on paper, but in principle.

This couldn't be more important than on an issue like what the LGBTQIA+ community is facing in Texas and Florida.

Last week, the Florida Senate passed what is commonly referred to as the “Don’t Say Gay” bill, which would prohibit discussion of sexual orientation or gender identity in schools. Gov. Ron DeSantis has indicated he will sign the bill into law, effectively burying discussion of the LGBTQIA+ community under the rug in public schools.

Brands, increasingly unable to stay above the fray on polarizing political issues, are starting to make their positions about this situation known.

According to The New York Times, more than 60 major businesses have signed on to an advertising campaign in Texas protesting the new bill. The digital campaign, which also included a full-page print ad in Friday’s Dallas Morning News, states “Discrimination is bad for business” and is signed by Johnson & Johnson, Macy’s, Apple, Meta, Google, Levi Strauss, Gap, Ikea, REI and more blue-chip, household name brands. 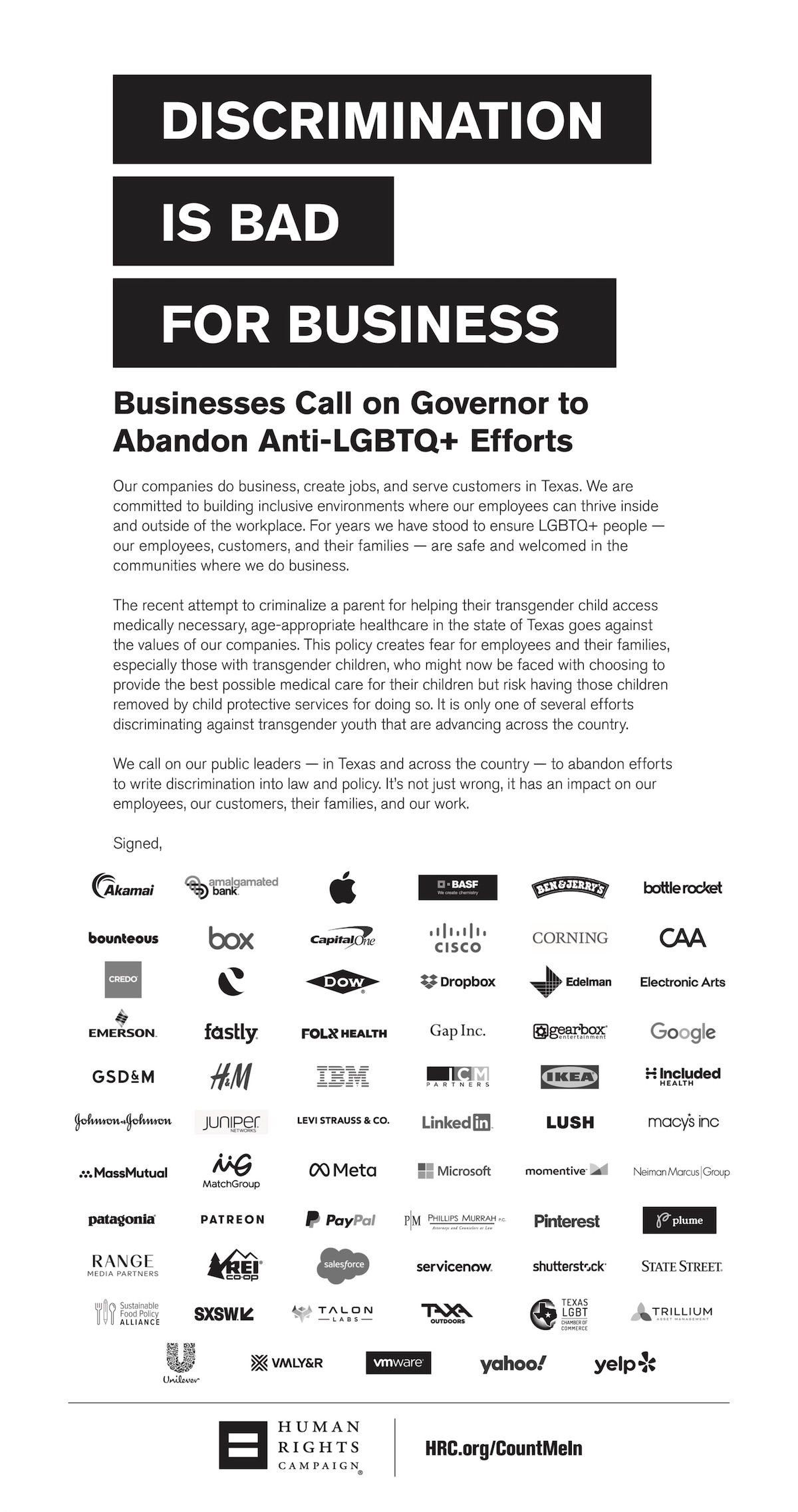 In Florida, not as many companies have pushed back against the “Don’t Say Gay” bill, although that might be starting to change based on consumer reaction to Disney’s botched response last week.

Massive public outcry led CEO Bob Chapek to apologize to Disney’s LGBTQIA+ employees and walk back his initial statement that the company’s “inspiring content” should signal its support for the community. Disney, which had previously donated to all of the Republican senators backing the bill, reversed course amid the pushback, suspending all political donations in Florida and donating $5 million to LGBTQIA+ rights organizations.

The backlash against Disney, which is the largest employer in the state of Florida, is a prime example of how brands can no longer straddle the line of doing good without backing up their words with action, especially when it directly impacts human rights. For a company that makes a pretty big deal about supporting the LGBTQIA+ community, donating to politicians that literally want to silence their existence is more than a little contradictory.

Unfortunately, as other states including Georgia, Tennessee, Indiana, Oklahoma and Kansas consider similar bills that suppress talk about sexual and gender identity in the classroom, brands have more chances to get this right.

Major companies need to please massive consumer bases and meet fiduciary responsibilities. But funding politicians who want to silence and delegitimize valid communities (who are also their customers), while walking this country backwards into the past, is crossing a big, fat rainbow colored line for today’s conscious consumer.

Here’s something we were allowed to learn in school: Actions speak louder than words. And in the U.S., money speaks the loudest.

So if you want to tout yourself as an ally, or a purposeful brand in any sense, make sure that your statements align with your political donations.