The fast food brand will also donate $100,000 to the Dave Thomas Foundation for Adoption.

Carter Wilkerson’s prayers have been answered.

What began as a simple request for a year’s worth of Wendy’s chicken nuggets from a 16-year-old from Reno has now become the most retweeted tweet of all time. With 3.42 million retweets, the post finally surpassed Ellen’s famous Oscar selfie. On Tuesday, Twitter made the announcement in a blog post.

Although the number is far from the 18 million Wendy’s challenged the teen to receive, the company has granted Wilkerson (@carterjwm) gift cards for a year’s worth of the nuggets he fought so hard for.

Wendy’s is also donating $100,000 in Carter’s name to the Dave Thomas Foundation for Adoption, which finds homes for children in foster care (the group was originally formed by Wendy’s founder, Dave Thomas). Carter had been raising money for the charity on his website nuggsforcarter.com.

.@carterjwm is now the most retweeted tweet of all-time. That’s good for the nuggets, and $100k to @DTFA. Consider it done. #nuggsforcarter pic.twitter.com/k6uhsJiP4E

On Tuesday morning, Wilkerson offered a tongue-in-cheek apology to "The Ellen Show" for breaking its host’s record. In truth, the show played a significant role in his accomplishment. After Wilkerson appeared on the show in April, his tweet received a large bump in shares.

Hey @TheEllenShow sorry about that... Can I still keep my TV and Underwear??

Public sentiment seemed to support Wendy’s move. Eighty four percent of respondents to an April 21st Campaign poll said Wendy’s should "just give Carter his damn nuggs," despite the decreasing likelihood he would ever achieve 18 million retweets. The online poll received 950 votes. 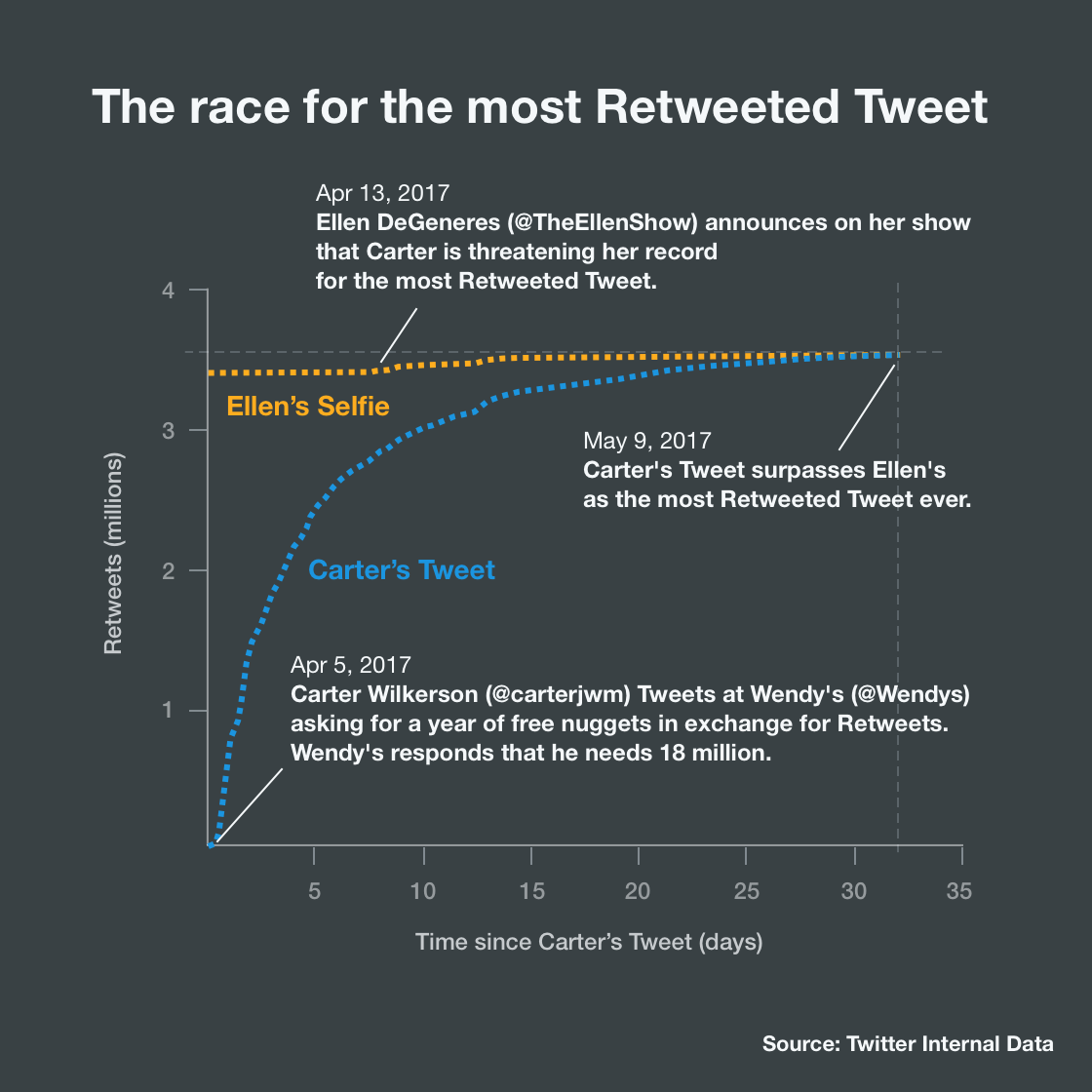 The tweet has propelled Wilkerson to social fame. On April 1st, he had 138 followers, and now has over 100,000. Twitter and Wendy’s even worked together to make #NuggsForCarter a custom emoji, a box of Wendy’s chicken nuggets. And Wendy’s rode the wave of popularity right along with Wilkerson. On April 24th, the fast food giant said it had earned 330 million social impressions and gained 149,000 new followers as a result of the campaign, numbers that have surely grown since. The tweet was such a social media sensation that even brands like Apple, Microsoft and Google took part in supporting the teen.

"We knew that the love for Wendy’s nuggets ran deep," said Frank Vamos, director of brand communications at The Wendy’s Company, in an email at the time, "but we didn’t expect the overwhelming response we’ve seen on Twitter to Carter’s love of nuggs."

Poll: Should Wendy's just give Carter his damn nuggs?