North Korea is, to all intents and purposes, ad-free, giving its packaging design, streetscapes and shops a unique look, but for how much longer?

The first advertising billboard appeared on the streets of Pyongyang in 2002 and depicted a North Korean celebrity promoting the Pyeonghwa (Peace) car joint venture. It had crash-landed into a city denuded of any ads. Before this, every billboard or poster in the Democratic People’s Republic of Korea (North Korea) was of the pure propaganda kind, an image drawn around a slogan to deliver very direct political or social messages of the Party and socialist way of life. I remember commenting on this first ad to a Korean colleague and being told in a rather stern voice: "This is not advertising, it is promotion."

Like the streets of Pyongyang, its papers and magazines are bereft of obvious commercialism. There are images of happy families but not because mum has a new product to tackle her cellulite, dad has a brand new car and kids are high on carbonated drinks but because they are happy workers fulfilling their tasks on the road to revolution. Advertising, as such, does not exist in North Korea.

In the 1990s and early 2000s, packaging in the DPRK was functional, the graphics somewhat naïve, simply used to inform the user what the product is and does. The aesthetics were influenced by the country’s turbulent history: foreign credos of Buddhism and Confucianism; invasions from powerful neighbours (particularly Japan); and, more recently, the European-dominated Communist Bloc.

What is significant is the importance placed on well-known Korean landmarks, places of revolutionary importance, ancient or mythical, and areas of natural beauty; all appear on different products, lending each an aura of special significance. A packet of cigarettes with the image of Mount Paektu, or a box of matches with the famous steelworks is to imbue them with instantly recognisable "Korean-ness", thereby making them, in their eyes, "the best" – even in the absence of any competition. Graphically, this means that a simple line drawing can convey a level of importance far exceeding aesthetic decoration.

In the same way, Pyongyang, the capital city of North Korea, is presented to North Koreans as one of the world’s great cities – even though few have experience of any other.

In 2002, economic changes in North Korea (bringing in foreign products and creating competition with local brands) coupled with the arrival of digital technology heralded the end of the hand-painted "retro" graphics, and the contemporary designs are similar to those you would find the world over. Pyongyang, once limited to its own design palette, appears to be increasingly adopting foreign influence to market its growing consumer-goods industry. Sadly, this has meant the loss of the idiosyncrasies and unique designs to the relentless march of industrial progress and taste for the modern.

The lack of advertising on the street is rather calming, the interface between shop and public is blank and all that is revealed is the architecture. Shops are not competing for your attention. Signage, like the old packaging, is simply to inform you what function the shop performs.

For the moment, Pyeonghwa Motors remains the only company allowed to have commercial billboards in Pyongyang. In time, this will change: streets will fill up with ads rather than "promotion", and some foreign ad agency will realise the potential of using the remarkable architecture as a backdrop for a campaign. But, for the moment, the DPRK remains, as Carlsberg might say, probably, the best ad-free city in the world.

One TV ad and a little brand positioning: a sign of things to come? 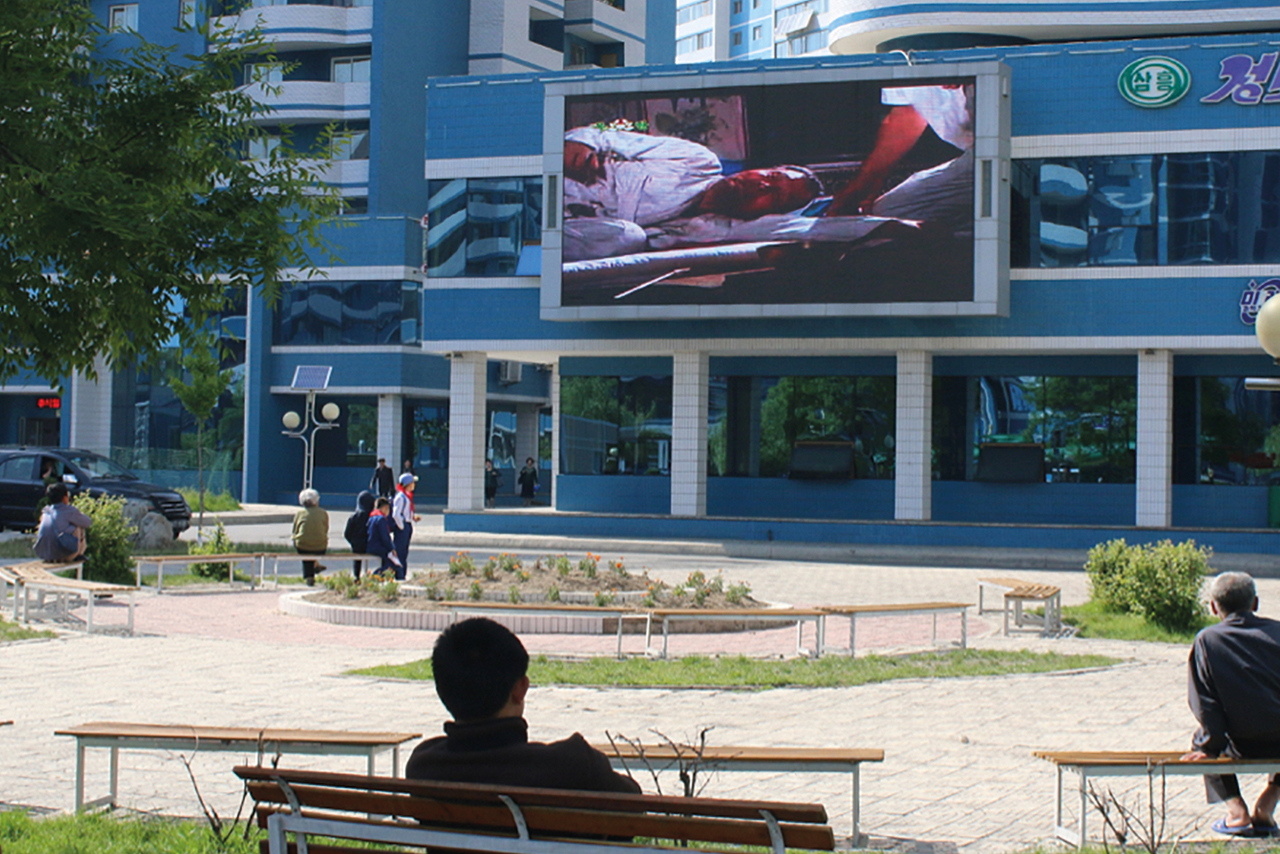 Speaking of a trip she took to North Korea last year, Laura Ashton, managing director and chief client growth officer at Xunama, said the only advertising she saw was for "select medical and beauty-related products". These were displayed as posters inside high-end department stores targeting "foreigners and the elite".

Ashton believes that digital is where real brand-building will begin in the DPRK. While there is no social media, as yet, a few products on ecommerce sites are, Ashton says, starting to include some "minor brand positioning alongside features and purely functional benefits". Ashton adds that she has heard tell that within the past couple of years in North Korea, a single, short TV ad, had run at the end of an hour-long, interruption-free programme.

"No-one had ever seen a TV commercial, nor did they have any context for it," she says. "Since there was hardly any reach and no frequency, the one question someone asked who had seen the [presumed] 30- to 60-second spot that looked nothing like the variety shows and political messages alongside which it ran, was: ‘What was that? And where did it go?’"

Nicholas Bonner is the author of Made in North Korea: Graphics from Everyday Life in the DPRK, published by Phaidon

For more information on travel to or projects in North Korea, contact Nicholas Bonner: www.koryotours.com (koryotours@mac.com)

A view from Charles Vallance: Gun for hire

Ads don't have to be actively watched to be effective, research says

Eat my slogan: getting the public to swallow pithy political messages

How to be an effective media agency

Can Trump's ad blitz close the gap with two weeks to go?

The future of tech in marketing: Dodgy data or advertising gold?