W Verbier, a new Swiss alpine and ski retreat, will be taking over London's Leicester Square for two weeks ahead of its opening in December.

Between 25 October and 9 November, the company, part of W London, will be transforming the hotel’s public areas into an alpine resort as part of the two-week takeover.

W London’s lobby and entrance has been decorated with high-altitude plants, a Verbier mountain landscape scene and a repurposed gondola cabin that has been created into an interactive photo booth.

The venue will also have mountain-scape installations, furs, Swiss flags and fires to create an authentic après ski experience for guests. 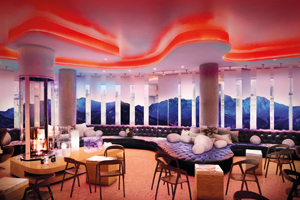 Other highlights include Layers of London’s pop-up alpine fashion store; a programme of mountain sport films in the 39-seater W London screening room; and W Verbier-inspired cocktails such as the W Republic of Verbier Trilogy with each representing France, Italy and Germany.

Sergi Arola, W Verbier’s culinary director and a two Michelin-starred Spanish chef, has also created a food menu for the pop-up programme, including special Swiss platter made up of a selection of charcuterie and cheese, pickled mushrooms, roast vegetables and rye bread.

During the last four nights of the takeover, Wyld – W London’s night club – will play host to the finals of the hotel’s ‘Search for a Resident DJ’ competition.