Digital content company Visualise has worked with Sony Music to produce an online and interactive version of its pop-up shop and exhibition for English punk rock band, The Clash.

Based in 75 Berwick Street, Soho, the Black Market Clash exhibition and pop-up store was created by Sony Music and features memorabilia from the music band. Visualise helped to shoot and build a 360-degree interactive version of the pop-up installation which consumers can tour online.

It allows online users to view memorabilia and listen to The Clash’s music. They can also click on albums and purchase them via Amazon.

Henry Stuart, founder of Visualise, said: "Whilst our initial brief was to enhance the overall experience of the pop-up store in an interactive piece of content that would live online forever, we are proud to have built a solution that includes both 360 images and an e-commerce element which makes users feel like they are inside the physical store." 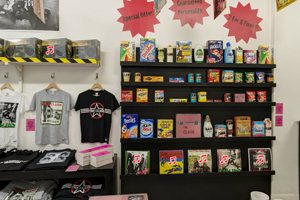 The exhibition showcases unique items from The Clash archive and previously unseen memorabilia from the band, as well as silkscreen prints, t-shirts, signed artwork, guitars, vinyl and album boxsets.

A listening lounge has also been created where fans of The Clash can listen to remastered recorded work. Guitar brand Fender will be present at the pop-up store as part of the ‘plug and play’ demo stations and The Clash masterclasses.

The pop-up store opened on 7 September, and will run until 22 September.