Mary Miller, a 35-year-old blonde, went up to the eighth floor of the Genesee Hotel, opened a window and climbed on to the ledge.

She sat on the ledge.

A crowd gathered and when the police arrived, everyone assumed they’d talk her down.

A press photographer describes what happened:

"I snatched my camera from the car and took two quick shots as the young woman seemed to hesitate.

"As quickly as possible, I shoved the exposed film into the case and reached for a fresh holder.

"I no sooner had pulled the slide out and got set for another shot than she waved to the crowd below and pushed herself into space.

"Screams and shouts burst from the horrified onlookers as her body plummeted toward the street.

"I took a firm grip on myself, waited until the woman passed the second or third storey, and then I shot." 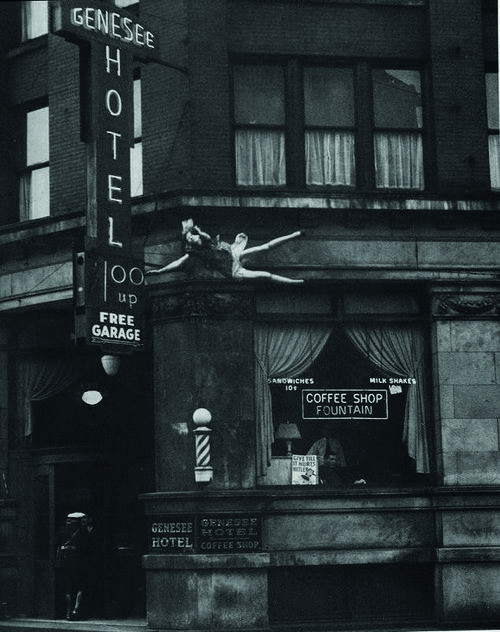 There are two parts I find chilling about his account.

First is the way he waited.

Not taking the shot too early, waiting to get it just before she hit.

Not pressing the shutter at the fifth or sixth floor but making himself wait until the second or third floor.

Knowing it would make a better picture.

The other part I find chilling is the woman’s reaction.

She acknowledged the people who had turned up to watch her.

She politely waved goodbye; it would be rude not to.

She didn’t want people to think she was rude.

But something else should make the picture chilling for ad people.

They saw HOTEL, they saw FREE GARAGE, they saw COFFEE SHOP, they even saw the striped barber’s pole.

But, unprompted, they didn’t notice a woman falling.

Some, at a quick glance, thought it was a sign on the building.

They weren’t looking for anything unusual, so they didn’t see it.

They just saw what they expected: the obvious.

That reaction is a lesson for everyone in the communication business.

People’s minds are concentrating on their own lives.

People aren’t waiting to engage with us… We have to do the work of making them notice, otherwise they won’t

Before we can communicate with them, we have to penetrate their world.

People aren’t waiting to engage with us and carefully decipher our ever-so-subtle wit.

They’re not waiting to work our ads out like a crossword clue.

We have to do the work of making them notice, otherwise they won’t.