APAC consumers are unlikely to forget the manhandling of a passenger of Vietnamese descent anytime soon.

The extent to which United's brand is damaged in China following the forced removal of a passenger (or "deplaned," in aviation speak) of Vietnamese descent from a US flight is significant—far worse than a normal flare-up over a tone-deaf communications response.

In fact, the Chinese are comparing the event to the Black Lives Matter activist movement and clamoring for social justice. The airline, which derives an estimated $2 billion in annual revenue from China, has gotten it wrong on many levels, said Shanghai AtComm Consulting president and partner Shirley King.

From the matter of respect for an elderly human, to the quality of passenger service, to the issue of perceived racial discrimination (regardless of whether the victim, David Dao, is of Vietnamese or previously-believed Chinese descent) and assent to police brutality, the brand has only earned for itself a negative image with a "capital N," she said, in an exchange in Chinese with this reporter.

"No doubt the United communications team are busy right now, judging by the amount of revised statements and apologies," commented Alec Peck, Hill+Knowlton Strategies' APAC Crisis and Issues lead. "To date there does not seem to be one that directly addresses the race issue and as a result we are already seeing further condemnations, threats and accusations."

The bookings for routes between China and the US and their China market share will certainly decline, said King. Before this saga, United had already suffered from a negative word-of-mouth effect from at least five PR failures—from the recent "Leggings Gate" in March this year to the whole "United Breaks Guitars" musical protest back in 2008.

But this time, they "completely destroyed their brand image," added King. "It is difficult to recover in the short term.

As of noon today (China Standard Time), there were more than 160,000 signatories to a petition, launched by a Chinese student living in London only one day ago, calling on the US government to launch an investigation into the incident, invoking the Black Lives Matter movement with the petition's own hashtag #ChineseLivesMatters [sic].

Some netizens cut up their United Mileage Plus Explorer cards (see above) in anger to United CEO Oscar Munoz's "patronizing" public responses.

"That this developed into a social media storm in the West and China, almost independently of each other, should be a lesson to many companies," added Peck. Social media is a global phenomenon, and brands need to make sure their crisis responses are similarly internationalized and tailored to differing concerns, he said.

We won't recap the chronological sequence of events, as it's already a matter of digital record, but Munoz's usage of the term "re-accommodate" as well as measly half-apology was two of many triggers.

Legalese: Not the way to go
Unfortunately, in such cases, lawyers can sometimes have a stronger voice than PR advisors, pointed out Jeffrey Broer, co-director of Founder Institute Hong Kong.

"In my humble opinion, any PR salvages need to take into account legalities that equate to admission of guilt and increase the risk of paying potential damages," Broer said. This factor can outweigh "weaker" arguments about managing public sentiment. Another way United has harmed itself is that its PR message to the outside world ("an upsetting event" and "we're going to fix what's broken") was different from the message internally ("disruptive" and "belligerent"). 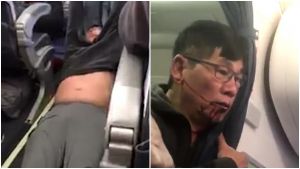 Broer said Munoz was probably weighing his communication options with legal counsel rather than PR executives. "As a CEO, I want to be presented with options and choose, and then you try to rationalize a decision. That's what management is about. Don't forget, CEOs are usually not on social media so all the options they get are within their own corporate bubbles, a little like the information bubble voters live in."

United's response "smacked of legalese aimed at avoiding future litigation, rather than responding to what was a horrific video of a disturbing incident," wrote our sister publication PRWeek editor-in-chief Steve Barrett. Ironically, PRWeek had honored Munoz as US Communicator of the Year last month for his work conducted in the period between October 2015 and October 2016.

"It’s fair to say that if PRWeek was choosing its Communicator of the Year now, we would not be awarding it to Oscar Munoz," Barrett clarified.

"Reputational risk is a huge concern for modern enterprises and relates to the value of a brand or company just as much legal and liability risk—lawyers cannot be the first line of a communications defense," he added.

In the end, the bottom line will be proof of the degree of the brand's damage in China, one of its key markets. Chinese top corporate executives are tipped to be rallying their circles to make a stand, financially, such as Wilson Yao, CEO of Allyes, who said, "The best lesson for them is if the Chinese buy up all of United stock."

'We really f-ed this one up': Inside Shea Moisture's response to 'whitewashing' accusations

What should United Airlines do next? 6 crisis experts weigh in

Gotta have it? Why Pepsi's dud could slow the in-house stampede