It's time for us to eradicate abuse and empower all women and girls to achieve their incredible potential - and brands have a big role to play, writes Unilever's Esther Marshall

When I was younger I thought I had found someone who loved me. Sometimes he did seem to love me. But at other times - after the drugs and the drinking, he became a different person. He would hurt me to the point that I was scared of him. What happened shook me and shattered my self-confidence to rock bottom.

For eight years I was silent about the abuse and continued to suffer the emotional scars even after the bruises had long faded. I was afraid people would think I was weak.

It had a deep effect on me. I couldn’t stop thinking that other people had achieved amazing things and inspired others. I knew at that moment I had to do something to help other women and girls who had also gone through abuse.

After speaking to people inside Unilever and women’s organisations, the idea for sTandTall was born. Our online platform connects women and girls who have experienced abuse or bullying with organisations around the UK who provide help. But our vision is much bigger than that - the sTandTall movement aims to eradicate abuse and empower all women and girls to achieve their incredible potential. 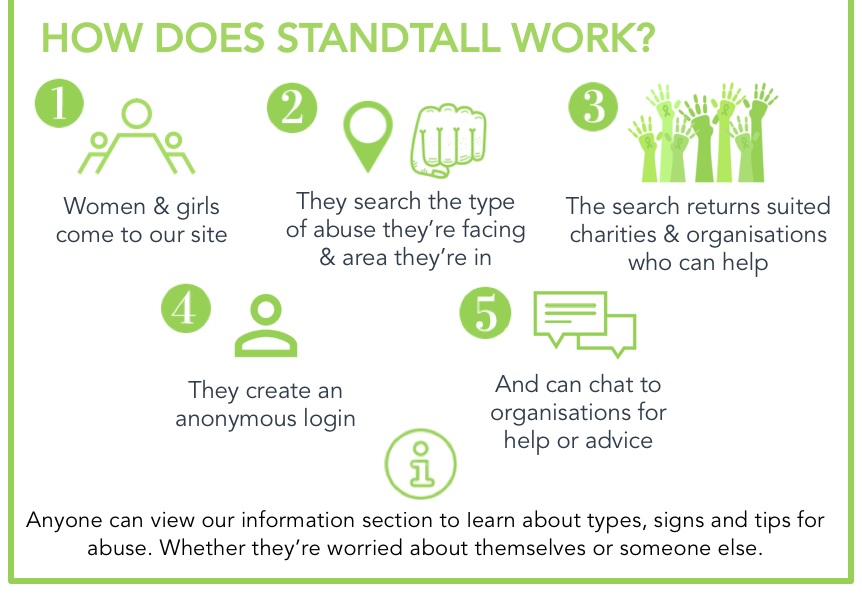 Had it not been for the opportunity Unilever provided me to attend One Young World in the first place, sTandTall would still be a dream in the back of my head.

Due to their generosity, our website has been designed and developed, our SEO analysed, and our PR strategy workshopped by leaders in their respective fields, all to support sTandTall and help drive our mission.  Unilever’s backing and Paul Polman’s support has given us credibility as a new organisation and access to a great network of supporters.

Without this, we’d be months behind and hold a lot less knowledge and experience in what we’re aiming to achieve. This shows the tremendous positive impact established brands can have on helping issues to move forward.

In the current climate with big campaigns such as #MeToo and #TimesUp we can see that now, more than ever people are calling for change. Women have been suffering abuse for years, in every industry, and in every culture and from every economic background.

Having a platform such as Twitter to share their stories - and champions to lead the way - has brought it to the spotlight. These stories were always important, but now they are finally being heard.

Would #TimesUp be as successful as it is if Emma Watson hadn’t donated £1 million to the cause, or if a multitude of women in the spotlight hadn’t paraded numerous red carpets proudly wearing the badge?

Brands can do this in the same way. Brands have power.

A brand with a following and influence can transform a small campaign for an issue such as domestic violence overnight. In the same breath, they could create their own campaign supporting an issue and use their resources for good.

Not only through re-tweeting and engaging with current campaigns, but by creating content, developing their own voice and putting weight behind it. Be bold. Create unique campaigns, step outside the norm and develop your own voice for social change.

Encouraging and supporting staff to pursue their passion on a project or to volunteer for a local organisation is another way brands can help generate change. Brands that invest in their internal talent will no doubt see the positive effects both to those around them, but also to the company itself.

Unilever supported the idea of sTandTall, and now we’re looking to work together to spearhead awareness within the company.  After all, £2.7bn is the lost economic output caused by domestic abuse in the UK: Every. Single. Year.

Turkey of the week: Zoopla's #MeToo blunder is tone-deaf advertising