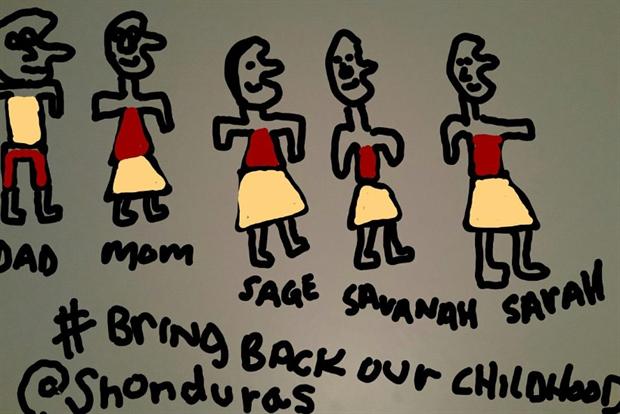 Unicef has recruited Snapchat users to launch a campaign designed to raise awareness of the horrific impact of the Boko Haram crisis in Nigeria on children, with Snapchat members redrawing the pictures by some of the children forced to flee their homes.

The campaign, which comes a year after more than 200 schoolgirls were abducted by Islamist militants from Chibok, is designed to equate the transient nature of Snapchat content, which sees pictures and messages disappearing shortly after they are sent, with the notion of the childhoods of victims disappearing.

The children’s organization is working with Snapchat artists including Shaun McBride (aka Shonduras) to tell of the plight of children, using drawings from kids affected by the conflict.

Users have been asked to add @Unicef to a "snap" and tell the charity what they would miss most if they were to be forced to flee their home.

For those people not on Snapchat, Unicef asks them to use Facebook, Twitter or Instagram and the hashtag #BringBackOurChildhood. Unicef has also created a campaign Tumblr.

Figures from Unicef reveal that around 800,000 children have been forced to flee their homes as a result of the conflict between Boko Haram, military and civilian defense groups.

Manuel Fontaine, Unicef's regional director for West and Central Africa, said: "The abduction of more than 200 girls in Chibok is only one of endless tragedies being replicated on an epic scale across Nigeria and the region.

"Scores of girls and boys have gone missing in Nigeria – abducted, recruited by armed groups, attacked, used as weapons, or forced to flee violence. They have the right to get their childhoods back."

Pepsi reminisces on the messy moments we miss

New toys from 360i bring playtime to patients living with paralysis