Twelve years after iPhone launch, adspend on smartphones has overtaken desktop for the first time.

More than half of the UK’s digital adspend now comes from smartphones, the Internet Advertising Bureau and PwC’s annual research has revealed.

The shift to internet-enabled phones has been dramatic since Apple launched the iPhone in January 2007 and revolutionised a nascent platform for digital media.

As the chart below shows, smartphone adspend was only £38m 10 years ago. 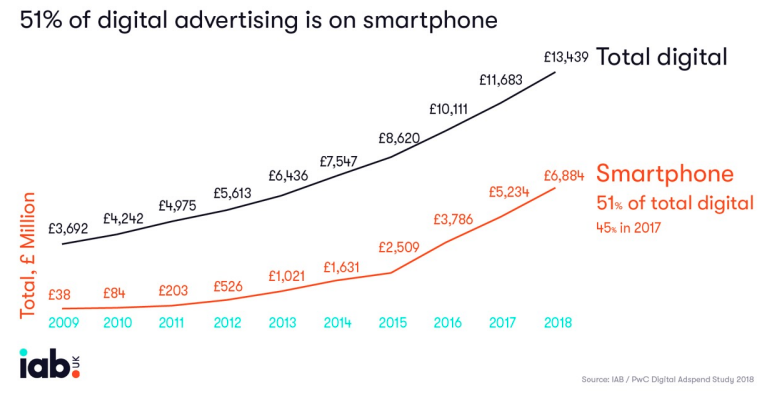 This compares with UKOM audience data from December 2018 that shows people spend two-thirds of their time online on smartphones.

And within the video sub-category of display advertising, outstream has increased its dominance: outstream or social in-feed now accounts for 57% of video spend (up from 52% in 2017), compared with 42% for pre-mid-post roll (down from 46% in 2017).

"We continue to see evidence of online advertising being used for brand-building, especially by the growing market of direct to consumer brands."

WFA: Brands have 'moral' duty to call out tech giants over dangerous content

Next boosts digital marketing to £46m as it delivers 'higher returns'