The UK’s annual export of advertising services jumped 18% to £6.9bn in 2017 despite Brexit.

That’s according to the inaugural UK Advertising Exports Report from the Advertising Association, which has created an exports tracker by using data from the Office for National Statistics and is presenting the research at Advertising Week Europe in London.

Advertising exports grew faster than the wider UK services sector, which increased exports by 7% in 2017. 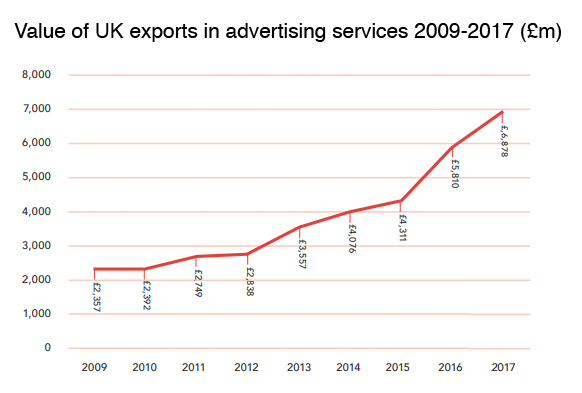 The report also shows UK advertising exports have almost trebled from £2.4bn in 2009, although it did not mention whether sterling's decline in value since the Brexit referendum in June 2016 had an effect.

James Murphy, group chief executive of Adam & Eve/DDB who has taken on the newly created role of exports champion of the AA after ending his role as chairman of the trade body, welcomed the figures.

"It shows exports are more important than ever for the UK ad industry and growth has continued despite Brexit," he said.

Murphy added that the "critical mass and scale" of the UK ad industry as a centre of creative excellence made it hard for rival cities such as Amsterdam and Paris to challenge London’s position.

Although Brexit is a major concern for the ad industry, Murphy said he is "hopeful we can boss our way through this".

But he warned Britain must remain "open to overseas talent" and maintain "a complementary regulatory environment" with other major markets to support continued exports growth.

The AA’s think tank, Credos, surveyed 120 UK advertising and marketing businesses for the report and it found that 87% generate income from outside the UK, with overseas clients accounting for an average of 31% of revenue.

The European Union region is the primary destination for advertising exports, with almost 90% of UK businesses serving an EU client.

The single biggest export market is the US, with three-quarters of the businesses serving an American client, according to Credos.

Germany, France and the Netherlands were the next biggest markets, followed by China.

Eight of the businesses – Above & Beyond, Adam & Eve/DDB, Crowd, DAZN, Framestore, Jellyfish, MBA and Nexus Studios – have provided case studies for the report.

In the case of Adam & Eve/DDB, it has carried out 75% of the work for Samsung’s North America creative account in London, "driving profitability and creating jobs in the UK", the report said.

The AA launched "A great advert for Britain" as a marketing campaign to support its exports strategy in 2017 and it went on to set up Promote UK, a cross-industry group to promote British advertising around the world in partnership with the Department of International Trade.

The AA, the IPA and DIT have been running Export Month in the run-up to the UK’s planned exit from the EU on 29 March and they have been active at a series of international events, including the Shanghai Advertising Festival, South by Southwest and Advertising Week Europe.

29% of the 120 British advertising and marketing businesses surveyed by Credos have a Chinese client.

Su Tong, chief executive and founder of Chinese digital agency Hylink, who is on a visit to London this week, said Brexit could bring the UK and Chinese advertising industries closer because Britain will need to build new trading relationships beyond Europe.

"Because of Brexit, Britain is probably more open to look for opportunities to collaborate with other companies and other potential players," he said. "It can be a practical opportunity for Asian and Chinese companies to have a deeper relationship with the UK."

Hylink opened its first European office in London in 2017 despite Brexit. "It’s because London is the most important place for a Chinese company to go international," Su said.

Campaign calls on adland to Stand Up To Cancer