UK adspend will grow faster this year than previously thought, Dentsu Aegis Network has forecast, despite the ongoing political crisis over Brexit.

The owner of Carat and iProspect today forecast spend in the UK to rise by 6.3% in 2019, up from a previous prediction of 6% in January.

The UK is also on track for a 10th consecutive year of double-digital growth in digital adspend. Dentsu Aegis cited the UK’s digital maturity as one of the reasons it is proving more resilient to business uncertainty from the government’s failed attempt to take the country out of the European Union.

However, Dentsu Aegis has downgraded its forecast for global adspend growth this year to 3.6%, down from a previous estimate of 3.8%, amid slowing growth in China, Italy and Russia. 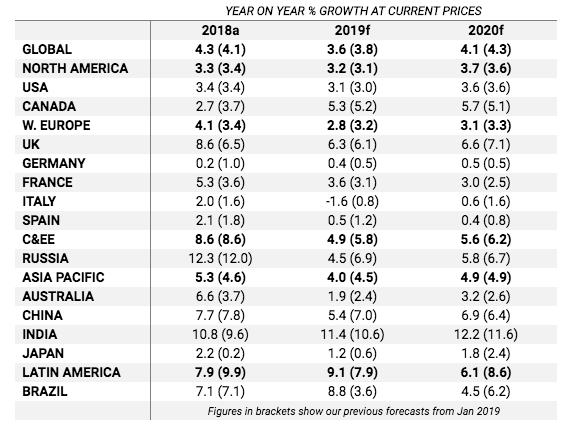 While nine of the top 13 markets are seeing softening growth in spend this year, India and Brazil are bucking the trend and seeing faster growth than previously thought. While India’s spend is benefiting from a general election and massive interest in the Cricket World Cup, Brazil’s growth has been driven by strong growth in mobile spend.

Global adspend growth will speed up again to 4.1% next year, Dentsu Aegis predicts, but this is still below the 4.3% growth achieved in 2018.

Peter Huijboom, Dentsu Aegis' global chief executive, media and performance and global clients, said: "Our adspend forecasts paint a picture of an innovative industry, driving growth through transformation in digital, in mobile and in traditional formats like TV.

"Digital remains the main force behind growth in a tougher economic environment – in our industry and beyond – as the development and adoption of new technologies continues apace. 2019 is set to be the year of 5G (alongside increasing and improving 4G coverage), smart TVs, developments in paid search and the continued march of mobile video."

Why agencies will continue to thrive in times of media change

Almost half of UK don't know Google is funded by ads