Half say they will skip this year’s event.

Only a fifth of Campaign readers who ordinarily attend Cannes Lions are definitely planning to go if it takes place this year.

Last week, Cannes Lions unveiled plans for this year’s International Festival of Creativity to go ahead as an in-person event in June 2021.

But industry members overwhelmingly have reservations about the wisdom of heading en masse to the south of France at a time when the coronavirus may still be prevalent.

An online poll of registered readers of the Campaign website found that of those who would otherwise have been likely to attend Cannes, just over half (51%) said they would skip this year’s event and be back in 2022.

A further 29% of this group said they would consider going, depending on "how safe it feels", with only 20% saying they would definitely attend if it takes place as planned. 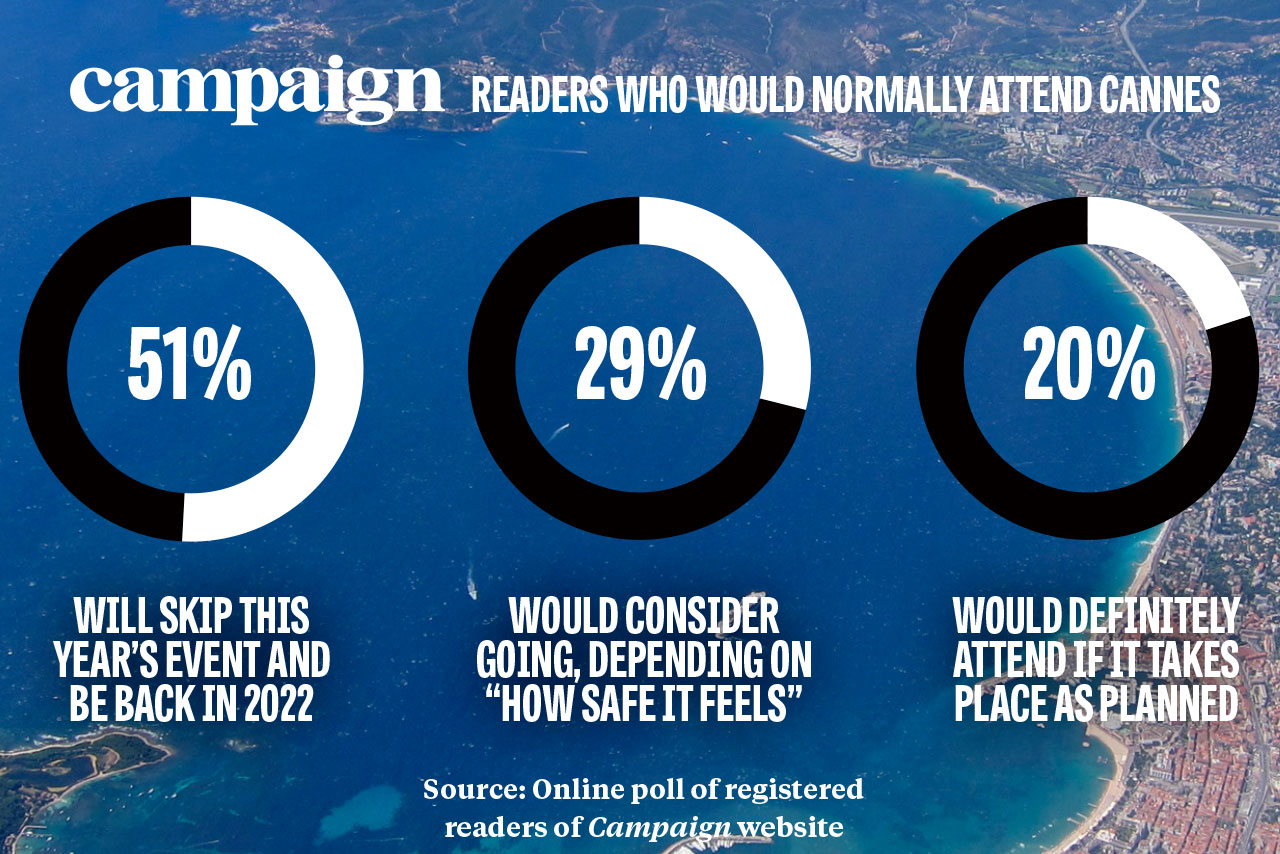 There was a split by different sectors within the poll results.

Brands and client-side marketers were most enthusiastic about an in-person festival in 2021.

Responses from creative agencies and media owners were broadly in line with the main survey.

In addition to all of those who would consider going to Cannes in 2021 and/or 2022, just under half of registered readers said they would not go to the festival, regardless of the circumstances.

A spokeswoman for Cannes Lions acknowledged that the 2021 festival may look rather different to those of recent years.

“The global situation continues to shift and we are carefully monitoring this, as well as maintaining our regular communications with the authorities in France," she said.

"The final shape of the 2021 Festival will evolve as things become clearer. The health and safety of everyone who attends is a priority and we will cap numbers if necessary.

"We know the value that the Lions hold for our industry and we commit to awarding Lions for both 2020 and 2021 this June. Of course we will also continue to have a significant digital element to Cannes Lions for those unable to attend in person."

Cannes Lions, which is owned by Ascential, initially postponed last year's festival from June to October 2020, in the hope of still running it in the south of France, but ended up staging some virtual sessions and awarding the best agencies of the last decade.

Whether the festival will legally be able to take place at all this year is still up in the air.

As it stands, UK travellers are required to present a negative coronavirus test ahead of travelling and isolate for seven days upon arrival in France.

“We are a creative industry that thrives on the spark of human connection, so we are all collectively struggling with this,” she said. “But given the present lockdowns and the unpredictable nature of the current situation, it's tough to imagine travelling for work in the near future.”

Ben Middleton, chief creative officer at Creature London, was blunter about what he saw as the potential risks.

“First up, I love Cannes," he said. "Second up, a lot of dickheads go to Cannes. Third up, if you're planning on going to Cannes this year, at a time when [Presidsent Emanuel] Macron is about to announce further restrictions in France to avoid, you know, a load more deaths, then you really are an uber-dickhead."

Becky McOwens-Banks, executive creative director at VaynerMedia London, described the plans for Cannes Lions this year as “short-sighted”, and instead encouraged the organisers to focus on its digital features to remotely provide industry members with “some of the inspiration, learning and centrality… it usually provides in person”.

In October last year, Cannes Lions unveiled a digital masterbrand, Lions, in a bid to expand its International Festival of Creativity into a year-long platform. The festival has been hosting smaller digital elements since 2016.

In spite of the event’s importance for industry members, Ben Mooge, chief creative officer of Publicis Groupe UK, remained on the fence about whether he would be attending this year.

"Timing is everything, and frankly I think it’s a little too soon to visualise us all swigging rosé when we have other societal priorities right now,” Mooge said.

Tanya Brookfield, chief executive of Elvis, meanwhile suggested the planned return of the festival presented the chance to rethink some of its traditional trappings. She called for a “more grown-up, inclusive and responsible Cannes with less 80s-style excess and more focus on the power of creativity”.

Expanding on this point, Engine Creative chief executive Ete Davies said that while he hoped it would be possible to attend Cannes in person, "what's important is not so much whether I’ll be going, but whether Cannes can improve overall inclusivity and accessibility to the festival."

This was something Cannes has "arguably had issues with in the past", he said.

"I hope that the learnings and adaptations which have happened as a result of the pandemic mean that in future the content, inspiration and experience of the festival are more accessible to all, whether you've had a vaccination, or are wealthy enough to afford the ticket, flight or yacht," Davies added.

"If it doesn’t, then I suspect that less of us will be attending in future years, even when travelling is “back to normal”.

In 2019, Cannes Lions received 30,953 entries from 89 countries for the International Festival of Creativity awards.

Despite the challenges brought on by the pandemic, Campaign’s survey shows that there are still many in the industry keen to return to the French Riviera.

“We have always enjoyed our participation in the Lions and will continue to give our support should it be a virtual or real-world event,” Patton said. "With the challenges that face the industry right now, an opportunity to come together and exchange ideas can only be a good thing.”

Has Cannes moved with the times?

This year’s South by Southwest in Austin, Texas is now set to go ahead in March as a virtual event, after it was called off last week amid coronavirus fears.

With this in mind, Richard Exon, founder at Joint, told Campaign that he may be swapping out Texas in favour of Cannes this year.

“When we started Joint in 2012 we swapped our annual senior leadership jolly in Cannes for a company-wide week at SXSW in Texas; we’d love to stick with this in 2021, too,” Exon said.

“It’s such a different mind-expanding experience and totally focused on what’s to come as opposed to what’s just been. But, sadly, it’s going to be a virtual event this year, so maybe it’s time to see if Cannes really has moved with the times.”

Cannes Lions will go ahead in person, organisers confirm

Review of 2020: A financial downturn unlike any other

Wellness over wine: Advertising should move away from its alcohol-fuelled culture