UBS, the Swiss bank, is undertaking its first brand advertising campaign in more than two years and has signed up as a Formula 1 sponsor as it bids to restore its reputation as a trusted brand.

UBS, like a number of banks, has suffered during the financial crisis and has had to be supported by a cash injection from the Swiss government.

The brand campaign, undertaken by Publicis London, comes as UBS is named as a global sponsor of Formula 1.

The global campaign kicks off this week and will initially launch in UBS’s domestic market of Switzerland and across Asia Pacific.

The campaign, which runs across  TV print, and online, will then roll out across the rest of Europe and the US.

It includes the new strapline "we will not rest" which replaces its old strapline of "you and us".

The creative work features great achievements, and achievers, as a statement of what UBS aims to deliver for its clients.

The TV ad features footage of achievers including Neil Armstrong, under the title "The First", while Muhammed Ali is "The Greatest" and Steve McQueen "The Coolest".

The TV spot is set to a Maria Callas soundtrack and fades to the phrase "Until you are…" and then the strapline "We will not rest. UBS".

Simon Derungs, account director at Publicis Worldwide, said: "This is a significant event for us, having partners UBS thorough highs and lows, we intend this campaign to provide a real boost to the firm’s recovery."

The F1 deal means that UBS will become a global sponsor of the sport. No commercial details of the F1 deal with UBS has been disclosed.

In recent times, banks like Royal Bank of Scotland and Dutch financial group ING have severed ties with the motor racing industry. 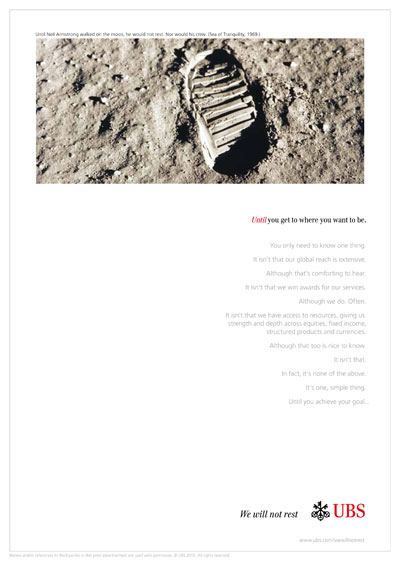 Renault brand to remain in F1