Twitter UK's head of brand strategy reviews some of the best campaigns on the social media platform last year and shares insights to help brands in 2016.

We saw a massive increase in brands using video and short-form content, the continued rise of personalisation at scale, and the explosion of emojis in both campaigns and everyday brand communication. These shifts reflect the wider trends we’re seeing on Twitter.

Take video. As of September, we witnessed a 150-fold year-on-year increase in video views, with Tweets containing video seeing 6 times more Retweets than those containing images. And emojis –

alone was used 6.6 billion times on Twitter in 2015. These behaviours indicate shifts in how users are consuming content and expressing themselves on Twitter – and the brands that get these shifts are seeing great success.

To showcase these key trends and identify which campaigns got people Tweeting, we took some of the biggest brand campaigns we supported in 2015 and looked at the volume of Tweets mentioning the main campaign hashtag. There are of course other metrics that can be used to determine success on Twitter, but this method provides a simple snapshot of the year.

We truly hope these examples inspire your thinking, and look forward to seeing how you will use Twitter this year to connect with customers. 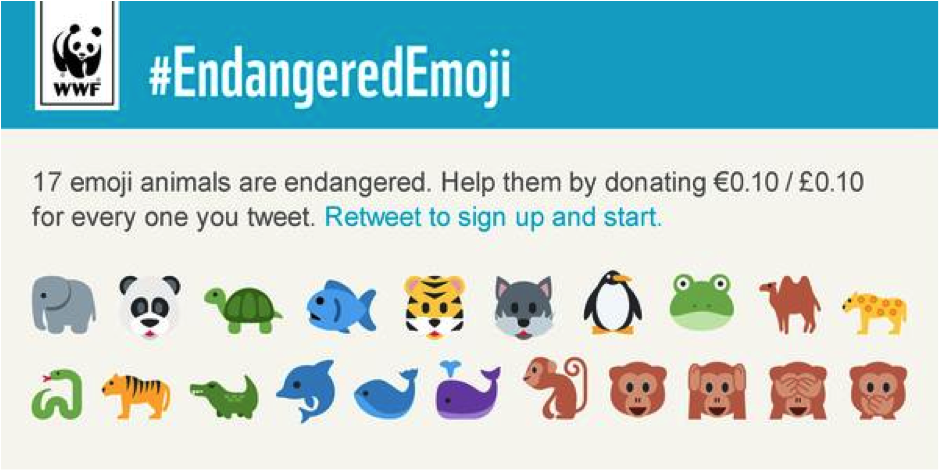 Did you know that 17 of the emoji animals are endangered? This simple insight powered one of the most talked about campaigns of the year, which invited Twitter users to donate every time they Tweeted one of the 17 emoji. To enroll, all users had to do was Retweet the launch Tweet. @WWF then tracked how often users tweeted one of the #EndangeredEmoji and issued regular ‘bills’, encouraging them to donate. A brilliant campaign rooted in a single, poignant insight.

#Therewillbehaters marked a stark change in Adidas’ presence on Twitter, a change that they nailed by fully embracing the attitude of the campaign in everything they did. They used short-form edits of their hero film to tease and reinforce the key message, showcasing how longer form content can be extended with a bit of creativity.

They were also nimble and continually leveraged Twitter products as they became available – like the then newly launched Group Direct Messaging to allow three fans to speak directly to Real Madrid’s Karim Benzema, and Periscope, on the same day the app launched, to broadcast James Rodriguez re-signing his Adidas contract. This is a master class in how to campaign on Twitter and evolve the conversation around your brand.

O2 developed a dynamic campaign that gave fans the opportunity to be at the heart of the Rugby World Cup. They used Twitter’s native video to launch and distribute the brand film. Fans were then invited to Tweet messages of support using #WearTheRose, some of which were displayed on the roof of the O2 and Tweeted back as gifs to the supporters. O2 also rebranded their stores with the campaign hashtag and dedicated an Evening Standard cover to England supporters, by showcasing fans’ photos. #WearTheRose is an excellent example of activating around a major live event and leveraging sponsorship. 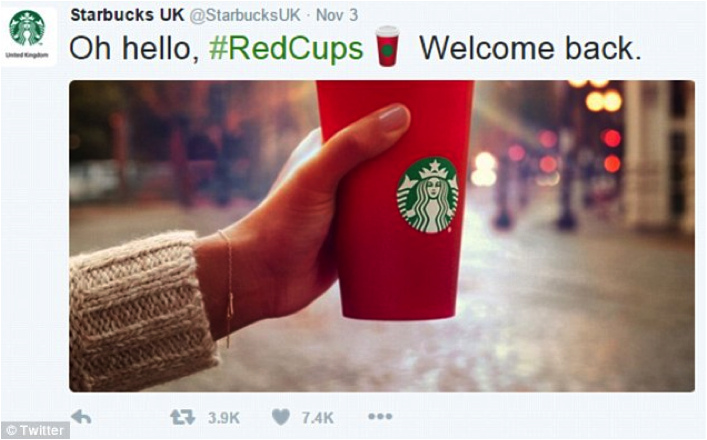 The arrival of Starbucks’ Red Cups has become a symbol to mark the beginning of the Christmas season. Starbucks partnered with Twitter to build a custom emoji that would help spread cheer, appearing in any Tweet that included #RedCups. Starbucks launched the campaign on Twitter with a Promoted Trend and supported it with a variety of Tweets with images, videos and gifs celebrating their festive drinks range. A great example of how to innovate, year upon year, in a key brand moment. 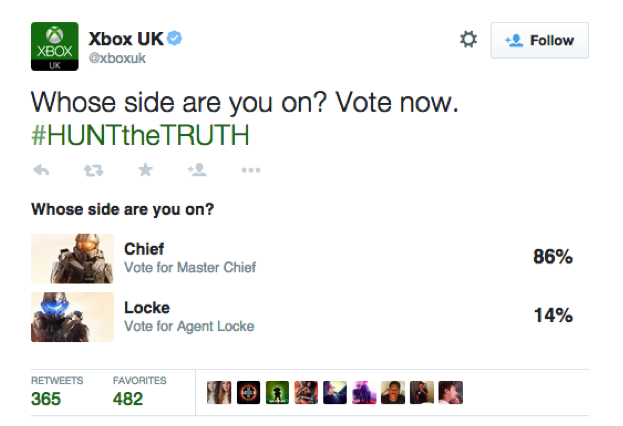 Halo 5: Guardians was one of the most important title releases this year for Xbox. They developed a campaign that included the use of native video to distribute the trailer, Promoted Trends, interactive gifs, a custom emoji and native polling formats to bring fans into the story. They invited users to pick which main character from the game they would #HuntTheTruth with, and Tweeted trailer content from the perspective of that character – thereby helping to distribute the video assets. This was a great way of taking interactivity to the next level, and providing an element of gameplay in-stream.

For many, seeing the John Lewis Christmas ad marks the beginning of the festive season, with users flocking to Twitter to share their reactions every year. This year, the launch Tweet saw over 52k Retweets, a 71 per cent increase versus last year’s launch Tweet. Following this, John Lewis individually thanked users who had Tweeted their praise for the ad by making a series of custom videos which they Tweeted directly back to them.  As Christmas drew near, John Lewis shifted the campaign focus on their tie-in with Age UK. #ManOnTheMoon is a beautiful example of aligning Twitter and TV campaigns, layering in personalisation and social messaging to drive action. 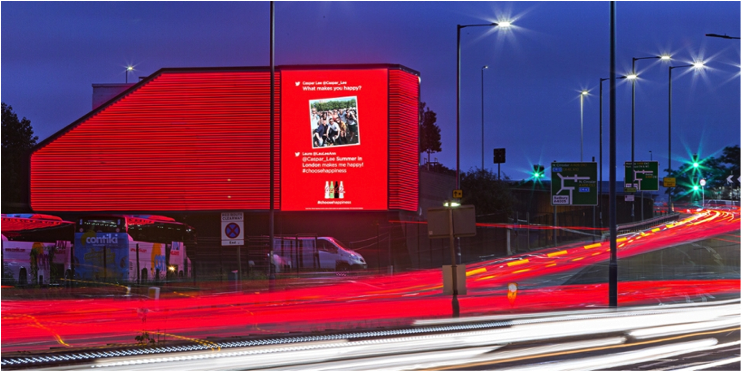 To land their new "choose happiness" campaign, Coca-Cola used Twitter to spread and trigger happiness on and offline. Having launched the new positioning in May, Coca-Cola went on to connect with people in happy moments, such as bank holidays, V-Festival, summer holidays – and the Rugby World Cup – contextualising what #ChooseHappiness meant each time. At the campaign outset, Coca-Cola promised to bring happiness to London, which they measured through Twitter sentiment analysis that was displayed live on digital out-of-home.

A Tweet-powered vending machine that invited commuters to #ChooseHappiness and instantly rewarded their participation was also a highlight. 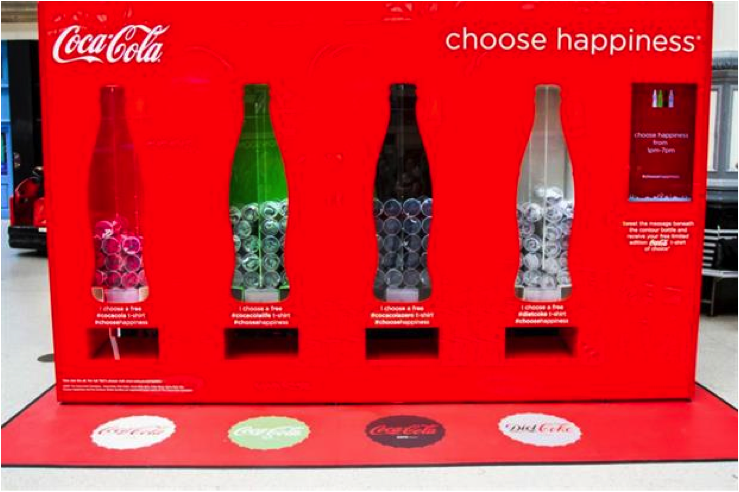 2015 was a massive year for rugby fans and affiliated brands. Dove Men wanted to use their access to tickets and players to drive conversation around the game. In addition to running native video for their longer form pieces, Dove Men created a series of Vines, featuring players and product to showcase their association. They supported this content with a regular stream of ticket-giveaways that utilised a range of new Twitter formats like Polls and the Flock-to-Unlock unit. The true beauty of this campaign was the variety of content and tactics that all worked together towards one simple goal: making rugby fans #ScrumTogether.

To launch The Martian, Fox developed a campaign that placed every single one of us in NASA’s Mission Control Center. The trailer appealed to us all to get involved and #BringHimHome. Following the launch, Fox circled back to thank users who got involved by creating personalised versions of the trailer, and Tweeting them thanks. These were met with a fantastic response from the people selected, and showcases the power of personalisation at scale.

If 2014 was about launching #FreeTheJoy – the simple pleasure that eating chocolate brings – then this year was about reinforcing this message in everything Cadbury did on Twitter. From creatively celebrating the range of chocolate variants, to playful Vines which extend their longer form assets, and fun games that reward engagement through the chance of winning chocolate, Cadbury focused their content strategy on celebrating their chocolate and the many ways it triggers joy.

Cadbury also freed the joy in the real world, through activations like Joycyle which brought joy to queues all over London and the Marvellous Smashables Smash, which again proudly displayed the core campaign message. This always-on campaign is a great example of identifying your key brand message, and ensuring that everything you do drives against this.

Eimear Lambe is the head of brand strategy at Twitter UK

How to fight for your ads like Bruce Lee