Twitter and Facebook have taken different approaches with respect to their video ad experiences. Alex Macnamara, UK managing director at Tremor Video, weighs up the benefits and pitfalls of each method.

Twitter requires people to click to play them whileFacebook's play automatically. So what are the pros and cons of each and which one is likely to be the most successful? 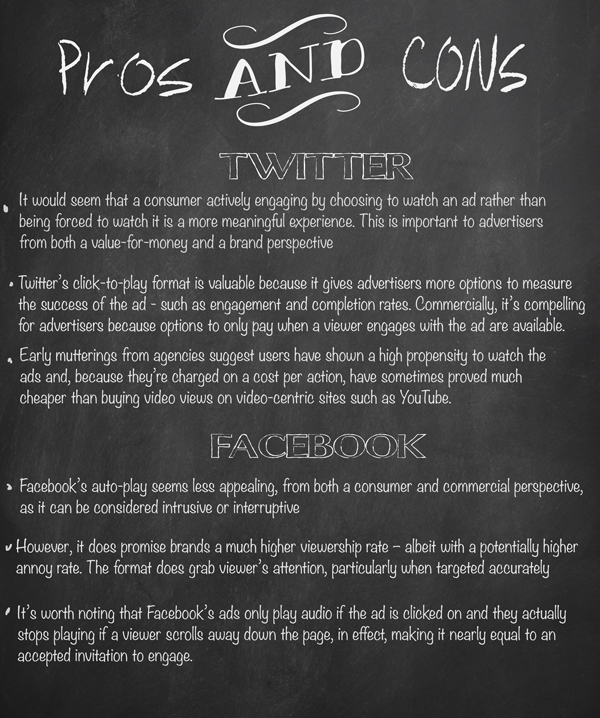 So the question is: which is better? The answer really depends on:

1) How you intend to measure the performance of the ad?

2) What you want people to do?

Auto play, for instance, works well for branding – a bit like TV ads – so it appeals to FMCG brands who want to remain front-of-mind rather than having to see high engagement levels, Reckitt Benckiser being a prime example of one choosing this method.

In terms of buying metrics, rumours are Facebook will be selling guaranteed GRP’s – that is, if the ad doesn’t hit the advertiser’s audience they don’t need to pay.

Agencies might be willing to take the trade off on auto-play pricing vs click-to-play, if the pricing point of the former justifies the perceived wastage. As long as the agency is fully aware of what they are purchasing and the value they’re getting there’s probably room for both formats. It will be interesting to see if Twitter sticks to its guns if their ads don’t end up generating good click-rates and brands start comparing performance to Facebook’s ‘high’ viewership rates.

Whether click-to-play or auto-play, we can all agree that ads need to be engaging, targeted to reach the right viewer, and served into quality content environments to grab the consumer’s attention.

Who has the better video strategy?
Tweet The two social media giants have both taken on video ads and both have very different strategies to do so. Alex Macnamara, UK managing director at Tremor Video explains the benefits and pitfalls of each. Twitter and Facebook have taken very different approaches with respect to their video ad experiences for consumers. Twitter requires people to click to play them whilst Facebook's play automatically. So what are the pros and cons of each and which one is likely to be the most successful? Twitter It would seem that a consumer actively engaging by choosing to watch an ad rather than being forced to watch it is a more meaningful experience. This is important to advertisers from both a value-for-money and a brand perspective Twitter’s click-to-play format is valuable because it gives advertisers more options to measure the success of the ad - such as engagement and completion rates. Commercially, it’s compelling for advertisers because options to only pay when a viewer engages with the ad are available Early mutterings from agencies suggest users have shown a high propensity to watch the ads and, because they’re charged on a cost per action, have sometimes proved much cheaper than buying video views on video-centric sites such as YouTube. Facebook Facebook’s auto-play seems less appealing, from both a consumer and commercial perspective, as it can be considered intrusive or interruptive However, it does promise brands a much higher viewership rate – albeit with a potentially higher annoy rate. The format does grab viewer’s attention, particularly when targeted accurately It’s worth noting that Facebook’s ads only play audio if the ad is clicked on and they actually stops playing if a viewer scrolls away down the page, in effect, making it nearly equal to an accepted invitation to engage.

Facebook to tell brands how relevant their ads are

Five behaviours marketers can learn from the new YouTube stars

Red Bull, BMW and Samsung among brands to sign up to Facebook's new 'client council'

How Topshop is championing the social catwalk at London Fashion Week