VCCP Media's Simon White wades into the bust-up between Ebiquity and Thinkbox over the outlook for TV advertising.

Despite what you’ve read in Ebiquity’s recent report – which suggested TV would no longer have the best ROI of any media by 2022 – broadcast viewing, in terms of TV and broadcaster video-on-demand combined, is the healthiest it has ever been.

In case you think I am just using BVOD to paint a brighter picture, I’ll remove it for a second and give you yet another shocking statistic. More adults watched TV in the UK in 2018 than in 2008 – 7% more, to be precise. And, at that time in 2008, there was no panic in the media marketplace around TV viewing figures and no studies saying its ROI advantage would be gone within four years.

The story behind the past decade of change is an interesting one. But it's also quite simple, involving two stages. Ahead of the recent decline in TV viewing (which has never been more than 3% year on year for all adults), there was a significant increase in TV viewing. TV viewing grew for four years from 2008, due to Sky giving out Sky+ boxes to its customers as well as the uptake of other personal video recorders. During this time, people saw more TV ads per day than before, because they were watching up to 30% more TV. Less than 20% of ads were fast-forwarded, through. 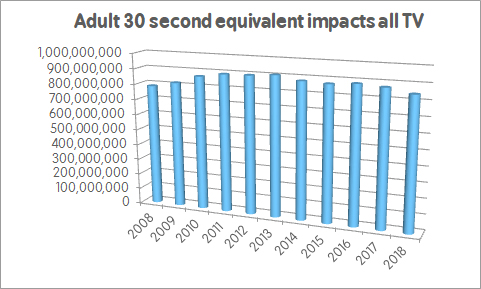 Prompting the second stage of this mini-evolution, about four or five years ago, Sky similarly sent its customers some little black boxes to attach to their PVRs, allowing them to watch on-demand services such as BBC iPlayer, ITV Hub, All 4. Freeview and Virgin also gave viewers BVOD portals and most smart TVs now have these as standard. And guess what? As with the PVRs, usage of these viewing services has steadily grown. The broadcasters all put them there because they knew it was what the consumer wanted and they in turn wanted to ensure people carried on watching their content.

The UK’s TV broadcasters noticed, reacted to and catered for a step change in consumer demand and behaviour. Consequently, millions are now watching content (and the ads in and around it) on demand as well as on traditional linear TV. The average weekly VOD viewing minutes have shot up as a consequence of the provision of these services: from 60 in July 2015 to 152 in September 2018 (source: Sky total consumption report, Barb and VESPA).

Broadcasters’ willingness to adapt has facilitated this change, as opposed to the supposed failure of their linear outputs.

Of course, it’s a more extreme story when we look at 16- to 34-year-olds, but as Thinkbox’s research and planning director, Matt Hill, has said, combining TV and BVOD is still the best way of maximising reach. If advertisers still want to have high brand impact, awareness and ROI on 16-34s, there is no better or more cost-effective way of doing it than through that combination. Take TV out of that mix and none of the numbers will be as good.

I will finish with one more observation. We need to stop looking at market patterns in the US to predict what will happen over here. In America, there is far more advertising and in-show commercialism overall. At the advent of VOD, US linear viewers left in their droves. Moreover, US time zones take away from the impact of a show, as social noise around TV events becomes a drip rather than a burst. The UK and US markets are incomparable.

We need to take a step back and look at the details and context, rather than panic about the future of what is still the best medium for mass reach and ROI performance, and will be for a long time yet – certainly more than a few years.

Adwatch: The Economist's TV spot could be for a search engine

My campaign: Tess Alps on going from gamekeeper to poacher in 1992