Today’s report forecasts TV adspend to shrink 0.5% in 2017. This comes after last month’s report by ITV that annual ad revenues had fallen for the first time since 2009. 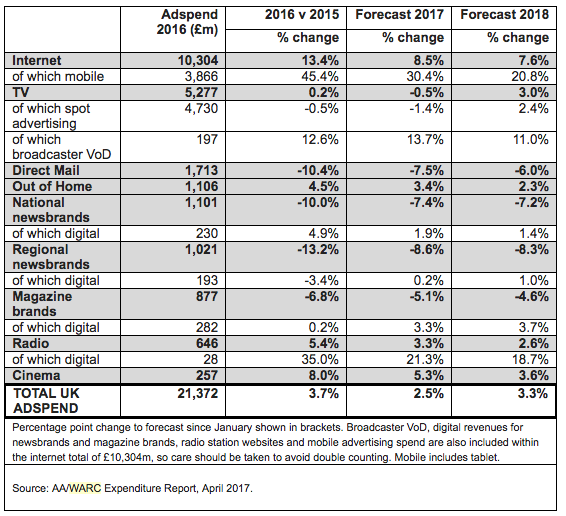 The total adspend growth rate of 3.7% is half of the growth rate recorded in 2015 of 7.5%, while TV’s share of overall spend has held steady at 25% over the past decade.

Growth in UK adspend held steady in Q3 after the Brexit referendum in June, before reaching £5.8bn in the fourth quarter of 2016, a rise of 3.9% year-on-year and the highest grossing quarter on record.

In real terms, after accounting for inflation, UK adspend topped its pre-recession peak for the first time during both the final quarter and for 2016 as a whole. Forecasts for the next two years indicate continued growth of 2.5% in 2017 and 3.3% in 2018.

Digital formats continued to grow in 2016, with internet adspend up by 13.4% to £10.3bn, with mobile accounting for 99% of that growth. Mobile spend reached £3.9bn, with 86% of the current value of the mobile advertising market generated in just the past five years.

Digital accounted for 38% of the £1.1bn out of home advertising market in 2016, double the share digital recorded in 2012, while revenues from online ads were up for national newsbrands (+4.9% to £230m) for the fifth year running.

Stephen Woodford, chief executive at the Advertising Association, said: "Advertising has proved resilient to uncertainty and behind these numbers is a cutting edge, digital business in which Britain is a world-beater.

"As we work towards Brexit, we’re urging Government to support UK advertising and do more to unlock its potential to grow UK plc."

Apple to launch Search Ads in the UK

TV adspend forecast to fall in 2017