The brand's obnoxious self-importance has reached a tipping point.

Marketers and consumers alike owe BrewDog a big debt of gratitude: it has almost single-handedly led the craft beer movement in the UK, opened up expectations of how brands can and should behave, and played a bigger part in shaping culture here than almost any other brand this decade.

But let’s get real: this is not because it has reinvented beer. No; it’s entirely a marketing success. BrewDog has become huge because it is one of the most vividly defined brands in history. People love its bold tone of voice, strong visuals, daft stunts and, perhaps most of all, the literal ownership it has offered through its equity crowdfunding schemes (full disclosure: I am one of those suckers).

Founders James Watt and Martin Dickie have made plenty of faux pas in the past, but the temptation has always been to forgive them, because at least it was better than the mealy mouthed aversion to causing offence we’ve always had from most brands. But the decision to sell a 22% stake in the business to private equity in 2017 limited what the brand could get away with; it has lost any right to act like the troublemaking upstart it once was. Take the money if that’s the right move, of course, but don’t pretend that doesn’t make you part of the corporate establishment. 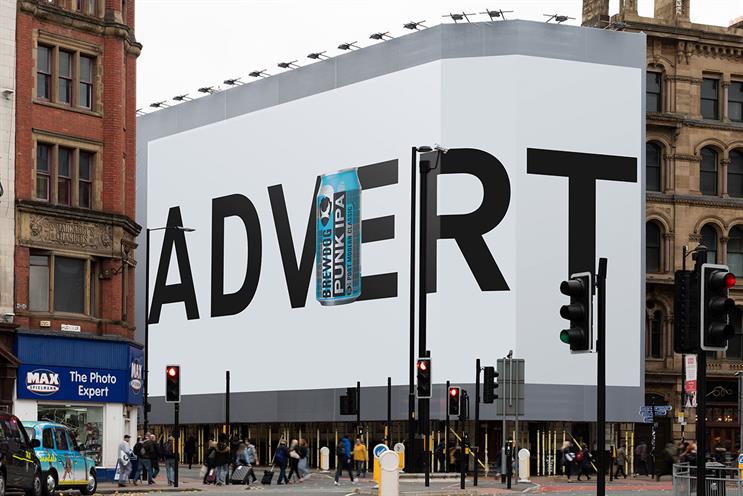 While this new work from Uncommon Creative Studio purports to strip away the trappings of advertising, it actually does the opposite: it’s throbbing with implied messages that ring false.

We’re meant to believe BrewDog is above other advertisers, that it doesn’t engage in the insidious dark arts of manipulating our subconscious desires. But just like a bottle of Peroni is a bottle of Italian chic, a can of Punk IPA is a can of authenticity, counterculture and perhaps even a rejection of capitalism.

It’s an awkward time for the brand, which has been accused of using a concept created by its former PR agency Manifest on its new alcohol-free beer Punk AF without credit. Meanwhile, Watt has been involved in a public dispute on Twitter with US marketer Jenny Frankart over what she characterised as unfair treatment in her experience of applying for a job at the company.

This is not to say that BrewDog is in the wrong in either of these situations. But, given the context, the campaign comes across as tone-deaf. If there’s one good thing to be said for Pepsi in the wake of 2017’s Kendall Jenner fiasco, it was the humility shown by the company after the backlash. Given the identity it has established over the years, it is hard to imagine BrewDog ever being able to do that. One day, that could cause big problems.

The parallels between Watt and Dickie and another of the 2000s’ defining entrepreneurs, Mark Zuckerberg, are interesting: both parties spotted the chance to create a new kind of product and marketed it with a good dollop of inspiration – but felt compelled to apply a grand social mission to their project as the cash rolled in. The BrewDog lads should probably just be grateful there’s no opportunity for Vladimir Putin (whom they parodied in a 2014 limited-edition product) to use their beer for nefarious purposes.

Food and Drink Alcohol Advertising Turkey of the week

Pick of the Week: Pipe down, Piers, the Warburtons spot is a bit of fun

Pick of the Week: Amstel's weird Jeff Bridges spot calls for a toast

Pick of the Week: Creatives behind Combat Stress show they care

Turkey of the Week: Cadbury is having its cake and repeating it

Pick of the Week: Frozen Simon Cowell brings in the laughs for Barclaycard