It's understandable that some consumers confuse Thomson with Thomas Cook, but Jeremy Ellis, marketing director for the UK and Ireland at TUI Travel, is quick to argue that the similarities end after the first four letters of the brands' names.

Shortly after Ellis was promoted to the role last December, TUI, which owns the Thomson and First Choice brands, released a national press ad with the line 'Another holiday company may be experiencing turbulence, but we're in really great shape.'

This bullish announcement was intended to highlight the fact that TUI Travel is outperforming Thomas Cook, its main rival, and other players in what remains a challenging market.

Its first-quarter results, released this month, bear this out - its bookings have remained steady, while those across the industry have slumped by 14%. Good performance is a relative concept in travel, however; TUI's operating loss has deepened by £23m in the past year.

As well as emphasising the company's financial credentials, the ad campaign served to differentiate Thomson from Thomas Cook, as Ellis explains.

'It was critical to clarify that in the most transparent way we could,' he says. 'We felt that advertising nationally was the best way to ensure consumers did not get the two brands muddled up.'

Brand rivalry aside, it was crucial that consumers knew the difference for more pressing commercial reasons. Thomas Cook had been forced to push back the announcement of its full-year results, before issuing a third profit warning in a year, and then undergoing a £100m emergency refinancing operation. In addition, it parted ways with its chief executive, Manny Fontenla-Novoa.

Thomas Cook countered TUI's ad attack with its own press ad to reassure consumers that its business had delivered 'great value for 170 years', and that 2012 would be no different.

TUI's full-year results showed a 25% rise in pre-tax profits, to £360m, while Thomas Cook made a £398m pre-tax loss. So, was the TUI ad designed to 'put the boot in', as Thomas Cook marketing director Michael Johnson described it in an interview with Marketing last month?

Not according to Ellis. He argues that 'there hasn't been any serious brand-building in our sector over the years', and travel brands tend to communicate through price-led material and offers, rather than outlining what they stand for.

Ellis has launched integrated marketing campaigns for Thomson and First Choice in the past five months in an effort to clarify their propositions. The £5m Thomson push promoted its 'exclusive' and 'tailored' offering using the strapline 'Uniquely designed holidays'. This was followed by a £3m relaunch campaign for First Choice, repositioning it as 'the home of all-inclusive'.

Ellis says these brand propositions are not yet 'embedded' in people's minds, and identifies this as his next task. 'Hopefully in the future we won't have to do any of that kind of activity, as our brands will stand for something,' he adds.

Since Tim Williamson left his post as customer director in September 2010, Ellis, a 20-year veteran at the company, has held the position of marketing director in all but name.

'The business has recognised that there is a real need for marketing to play a bigger role in our organisation,' explains Ellis. His position is within the 'mainstream' business. TUI Travel has two other divisions: specialist and activity, housing brands such as Exodus and Oz Travel, and the accommodation and destination business, which partners brands such as Hotelbeds.com and Laterooms.com.

The Thomson and First Choice campaigns mark a first for each brand and show that Ellis is not afraid of breaking with marketing traditions. For one thing, he has stepped out of the hitherto sacrosanct ad-cycle of rolling out ads on Boxing Day to kick off the winter sale season.

Instead, the Thomson push was launched in October. The early release achieved its purpose by creating a 'huge amount of talkability around it', claims Ellis.

'At the turn of year, every other ad is a sales ad, which makes it hard to get across the brand's emotional feeling,' he says. 'October is a quiet time for travel, so you get a better share of voice for, effectively, less money.'

Ellis contends that it gave Thomson a head-start on its rivals because now, when holiday shopping is in full swing, it is 'top of mind'. It is a strategy that TUI intends to continue.

Ellis' decision to put First Choice back on TV last December, after a two-year hiatus, was also key to cementing its all-inclusive positioning.

Despite the bedding in of its fresh brand strategy and TUI's relatively positive performance overall, marketing in the travel industry remains a challenge. For one thing, the holiday experience is different for each consumer, says Ellis, with travel companies selling 'intangible products' on a 'promise'.

'You can't walk into a shop and pick up, feel it or try on a holiday as you would with iPhones, clothes or cars,' he adds. 'There is a need for marketing to play an even stronger part in educating consumers in what we do, (as opposed to) other markets that can use brand retail to get consumers to touch and feel the product.'

Ellis is honest about the hurdles facing the industry, and its failings. 'I don't think travel companies have embraced social media particularly well,' he says. 'It's hard to find any company that has handled it well; it's hard to do.'

He is determined to break the mould in this regard, and on his path to social-media enlightenment, has hired a dedicated digital marketing manager.

Ellis plans to increase the transparency of the brands' communications by developing a social-media strategy, including efforts to be more active on Facebook and Twitter.

As digital marketing becomes a more important part of TUI's strategy, the company's behavioural targeting will increase. Ellis cites the examples of emails based on consumers' web-search activity, and using consumer data throughout the customer journey.

'We want to be able to recognise our consumers at every touchpoint, when they enter the website, go to a shop, check-in at the airport, while they are overseas and then post-holiday,' he says.

The brands already have a 'My Thomson' and 'My First Choice' offering which act as a personalised web portal for people who have booked a holiday. However, Ellis intends to take the concept further. 'We want our customer data to be as accessible as our sales data, so we can start tailoring our service.'

Drawing up detailed marketing plans for the year ahead is one thing, but no other industry seems as susceptible to major crises (volcanic ash clouds, the Arab Spring, heavy snow) as the travel sector.

'We plan for it to an extent, but you never know what these things are going to be or when they will come,' says Ellis.

Experience of the best and the worst of times during his 20-year stint in the industry also helps, but Ellis adds that 'you can't promote a brand based on crisis management'.

He says, though, that when it comes to marketing in a crisis, it is important for consumers to recognise that the company is 'doing everything it can', by 'giving them confidence' and communicating with people in 'whatever medium they want'.

Ellis contends that traditional tour operators have actually benefited from past crises, because their packages come with insurance, while those who book a flight or a hotel directly 'are on their own'.

Meanwhile, the focus on tailored holidays and delivering a sense of personalised service will fit well with consumer travel trends in 2012, he argues. TUI expects that consumers will be 'fussier' and more price-sensitive than in recent years. 'People will be more choosy about what they're getting for their money and we've created two brands (Thomson and First Choice) that answer just that. Our buying power allows us to get luxury accommodation for less money.'

Ellis insists there is a real appetite at TUI to raise the bar, with strong encouragement from the board to 'innovate from within'.

As long as he is able to 'crunch the numbers', Ellis has the backing to embrace new marketing ideas. Perhaps this will eradicate all four-letter confusion among consumers for good.

- Cement the differentiated positioning for Thomson and First Choice.

- Prepare for the inevitable political and environmental travel crises to come.

- Maintain the allure of holidays to consumers who are tightening their belts. 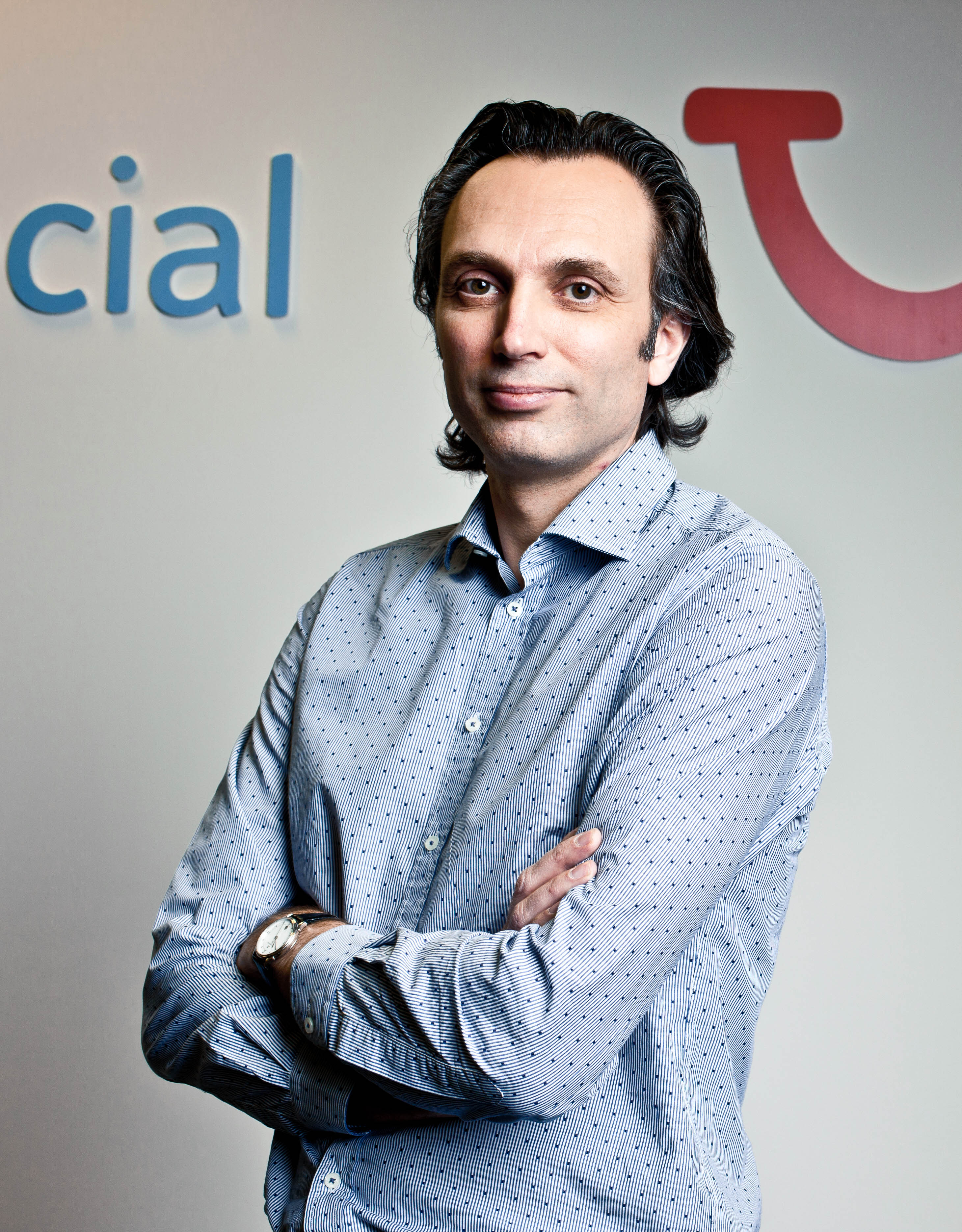 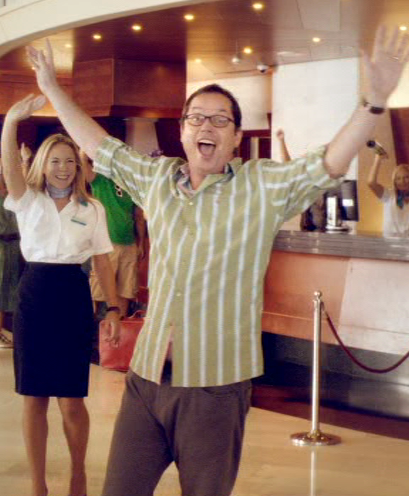 TUI broke one of the unwritten rules of travel advertising in October last year by rolling out a £5m marketing push in the autumn rather than Boxing Day. It is Thomson's biggest brand campaign to date and focused on 'quality time'.

After a two-year hiatus from TV advertising and a relaunch of the brand, TUI brought back First Choice to people's screens with a £3m marketing push. The humorous ads show the brand's fresh position as 'the home of all-inclusive'.

Family: Married with a seven-year-old daughter.

Hobbies: Motor racing. 'I have two classic cars, a Triumph and a Caterham, which I raced to win two British championships.' He also plays tennis and golf.

Last holiday: 'A 10-day, self-drive tour around Andalusia with my family. I like to get about.'