Marking the official day that Thomson rebrands to Tui, the company has rolled out a multi-million-pound musical-inspired campaign.

Debuting on 18 October, the ad by Y&R London is aimed at demonstrating how Tui puts the customer at the centre.

"The strategy is based on an insight, a key need that consumers have to be taken care of," Jeremy Ellis, Tui UK and Ireland marketing director told Campaign. "People want control and certainty on a holiday, and we can take care of customers from end-to-end now we're part of a global company."

The ad, with a cast of 45 dancers, 50 extras including Tui staff and over 100 crew, singing and dancing to the tune, Ain’t Nobody Loves You Better, will appear on every major TV station and within a fortnight will reach 63% of the UK adult population.

"Musicals are extremely popular at the moment and we felt it was a great way to dramatise the moment," Ellis continued. "When we found the song, by Chaka Khan, we felt it summed up what we stood for to the customer." 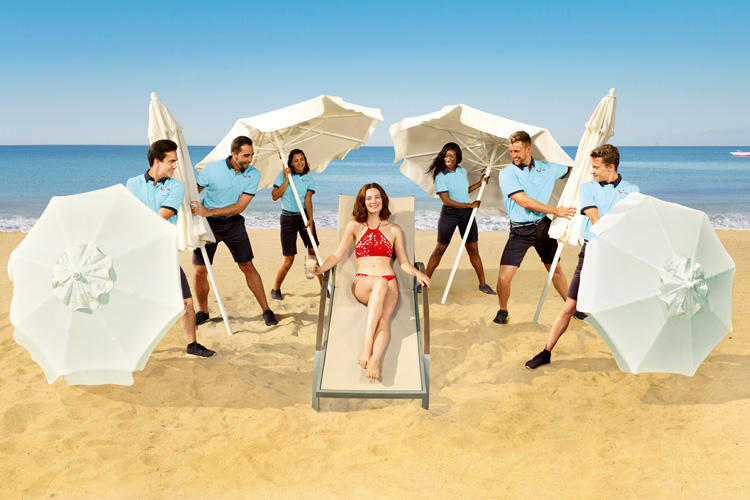 The spot was filmed in the Robinson Club Masmavi hotel in Turkey and was directed by Simon Ratigan and choreographed by Oliver Casamayou whose CV involves working in theatre and stage work, to ads for Chanel and music videos for Kylie Minogue.

"The scale of build for the ad was monumental taking two days to create with exterior plane panels, overhead storage, seats and carpet from one of Tui's very own Dreamliners shipped out to Turkey for the shoot," Jon Burley, chief creative officer of Y&R London said. "Filmed in a room within the Robinson Club Masmavi hotel, a wooden rig was built to hold the side panels up to then recreate the Dreamliner. Clever lighting was employed to look like early morning light on a flight and the iconic aeroplane scene was executed."

A strategic decision was made to place a woman at the centre of the ad and to not use a celebrity in the starring role.

"Women are the primary deciders of holidays, and we decided not to use a famous person because we didn't want the campaign taken over by a particular celebrity. We wanted people to be able to put themselves in the centre of our campaign," Ellis explained. "The ad is a celebration of our line, 'At Tui we cross the T's dot the I's and put U in the middle'."

This campaign is a culmination of months of preparation, starting with an CRM and owned-channel campaign to make existing customers aware of the name change, to a simple spot highlighting the switch.

The multi-channel media plan by MediaCom consists of a mix of out of home, radio, print and digital with a strong emphasis on social. The campaign is designed to dominate, starting with outdoor advertising consisting of 40 large digital outdoor formats, over 6,000 roadside six sheets in major cities across the nation including railway stations, bus T-sides in and around Greater London to capture commuters and further drive reach and frequency. Advertising will

Advertising will also be present across all UK and Ireland airports, in particular, Gatwick with the Gatwick shuttle completely branded with Tui messaging inside and out.

The campaign will also run across radio, to "highlight the correct pronunciation of Tui" and the spend is aimed at reaching 36 million UK adults with an average of seven opportunities to hear it with national and digital channels such as Kiss and Magic booked to maximise reach.

In print, the campaign will have Metro newspaper cover wrap, and a full-scale print campaign will run with premium formats across all key newspapers during the next week.

Tui will also run across digital with takeovers of YouTube (for 24 hours) coupled with TrueView. The brand will also be working with a wide range of other media partners to increase visibility and enhance brand messaging from Snapchat and Spotify to the MailOnline and Tripadvisor.

"Tui aims to dominate 29% share of voice within in the overall UK and Ireland market with their
aggressive campaign," Amanda Lakin, business lead on the Tui re-brand programme, said.

Tui has also signed on for a channel-wide sponsorship of Sky One.

The deal, brokered by MediaCom and Sky Media, launches on 19 October and will run for 12 months. Bespoke idents will be seen by 19.4 million people between then and the end of the year.

"The idents which will feature on Sky One have been created with exclusive, never seen before,
content from the TV ad," Ellisa said. "Featuring the same characters and memorable soundtrack the creative will help cement the Tui name and brand message further to a wider audience in an environment that will resonate."

A surprise reveal at the event last night was the prototype for Tui's facial reading machine that determines ideal holiday destinations based on subconscious micro-expressions.

Developed by RealEyes, the "Destination U" prototype will present customers with a range of holiday video experiences. The way the subject reacts at every stage will determine what they see next. Each person will have a different experience and at the end will receive a unique ‘prescription’ for the type of holiday likely to make them happiest.

The prototype is undergoing consumer testing with the vision of wider public retail trials in the near future.