Donald Trump is depicted as behind bars in a press ad launched by Paddy Power offering bets on whether the US president will be impeached. 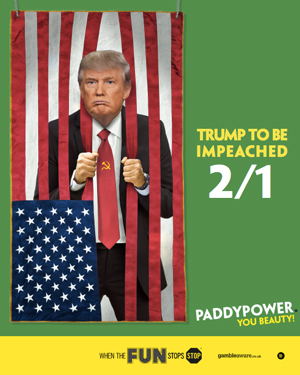 The tactical ads, which will appear in The Guardian and The Times today, were created after it was reported Trump had revealed classified national security information to Russia.

Speculation of impeachment has grown after Trump admitted last week he fired FBI director James Comey because, in part, he was investigating the president over alleged links between his campaign and Russia in the 2016 US election.

The Irish bookmaker's ad, created by Lucky Generals, offers odds of 2/1 that Trump will be impeached during his first term. Trump was sworn in for four years only in January.

Paddy Power’s odds on Trump resigning, regardless of impeachment, are even shorter at 15/8. The odds of the FBI confirming collusion between Trump and Russia is even shorter still at 5/4.

Last night US media reported that Comey issued a memo to FBI colleagues in February in which he said Trump had asked him to end an investigation into former national security adviser Michael Flynn's links with Russia. Flynn resigned in disgrace in February after it was revealed he lied about meeting Russian officials during last year's election campaign.

The memo was written a day after Flynn resigned. The White House denies the allegations.

Marketers must stop kicking the door down and interrupting