Held on Friday 18 October, the event took place in the Park's Copper Box Arena and saw 230 young athletes, their parents, Olympians and the press attend who experienced first-hand the work Sports Aid is doing for the stars of the future.

Sarah Trumble, client services director at Tribe, said the company had been responsible for managing the partners and press, as well as the branding of the event and registration.

She said: "We have been working with Sports Aid for a number of years and when it was announced that the Duchess was going to be its patron we said we would like to organise the event on their behalf to ensure they could focus on the content."

"The workshops are something Sports Aid regularly do for young athletes and their parents, where Olympians come and hold demonstrations and discussions with youngsters to inspire them in what they do in the future."

Last week’s event saw the Duchess of Cambridge make her first public appearance since the birth of Prince George in July.

As well as speaking to young athletes and Olympians such as rower Katherine Granger, Paralympic medalist Ade Adepitan and former freestyle swimmer Karen Pickering, she took part in a game of volleyball. 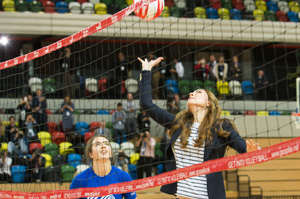 Trumble added: "We have been liaising very closely with the Palace and it’s the first time we have worked with them.

"The biggest challenge we faced was understanding the protocol – you think it’s going to be pretty daunting but once we got started it was fine. We couldn’t have hoped for it to be a better event."