Industry figures look back on getting entrepreneurial with new friends, secret meetings and epiphanies on mountains. 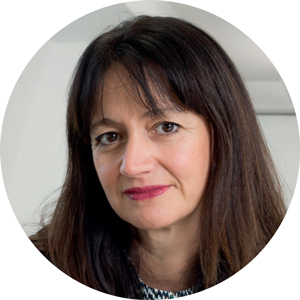 "September 2005, when we opened our doors and launched an independent media agency when the rest of the industry was all about consolidation. To say we weren’t ready for our ‘launch’ would be an understatement.

"I was on a beach in Italy and started getting messages from friends about it. I then realised that we had put a countdown clock on the7stars.co.uk website, counting down to 1 September – a notional date we had agreed and subsequently forgotten.

"An eagle-eyed Media Week journalist spotted it and ran a story about us on our launch day. So we ‘launched’ while I was on holiday, with an empty office and no IT or telephony. I’d love to say things have got a lot more professional since then, but most people reading this will know the truth." 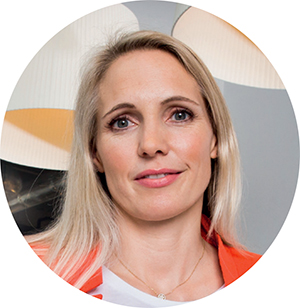 "The birthday party for my friend Warren Johnson, founder of W, in 2015 was a pretty pivotal moment. It was there that I met serial entrepreneur Debbie Wosskow – we got on like a house on fire. And, a year later, we had hatched an ambitious, bold plan to empower UK-based female entrepreneurs by providing capital and support. A few more months later, AllBright, the first funding and support platform for female founders, was born.

"I’ve spent my life on the corporate ladder, latterly as chief executive of Hearst Magazines UK, and so stepping into the entrepreneurial world was a significant change for me. The two worlds are very different – media moves fast but the start-up scene moves at warp speed. For me, there is nothing like using your passion to create something that empowers others. It gets me out of bed in the mornings." 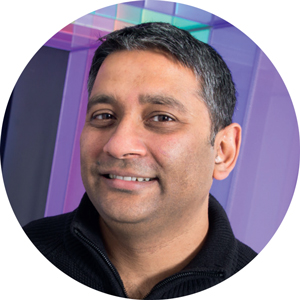 "My transformational moment was the opportunity to take on a key leadership role in setting up an agency within Accenture in Europe – now Accenture Interactive – in 2014. It was a unique opportunity to grow something special from scratch, be part of a movement, build a great culture and help in this huge business-wide initiative to rotate Accenture to the ‘new’.

"It was a great opportunity to blend two worlds and establish a culture of cultures that I think is now reshaping the industry. The access to clients, the talent, the appetite of the firm to do groundbreaking work, the diversity of thinking and the incredible support to ‘just go do it’ have made it an amazing experience." 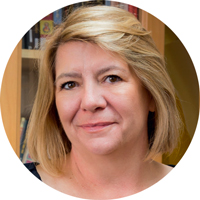 "It was in 2006 when I arrived at Pearl & Dean on a six-month assignment. My brief was a blank sheet of paper from the group chief executive and I was just emerging from a (now curtailed) period of maternity leave.

"Looking back, the open nature of the brief and the sense of a deadline (and possibly sleep deprivation) were energising and imbued me with a ‘just get it done’ drive.

"In the space of six months, we embarked on a transformation of the way we did business and our internal culture, and we parted ways with people who didn’t relish the challenge. I’d inherited a fantastic team and, once they were let loose, their energy and commitment were amazing.

"It made me realise that, with a sense of mission, people are capable of wonderful things. I’m lucky that, many years later, my pioneers are still working with me and we still embrace the idea of just cracking on with good ideas rather than analysing issues into an early death." 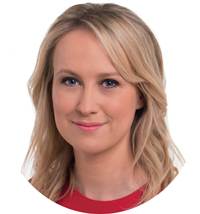 "Choosing one moment is impossible because there are many: a work experience placement at the local newspaper when I was a schoolgirl, joining the News of the World after university, moving to Sky News as a political correspondent in January 2011.

"But one specific moment came in March 2016 when I was covering a European Union summit in Brussels. We had been waiting for hours for David Cameron’s press conference but I started to get the sense that something was not quite right. Belgian journalists were talking in hushed and urgent tones. Senior figures were hastily leaving the building. Our team suddenly realised a terror raid was happening in nearby Molenbeek. One of the Paris attackers – Europe’s most wanted man – was arrested.

"As the other political journalists started filing into the press conference, we made a snap decision to leave and cover the terror raid. I was off my political beat but, when you work for a 24-hour news channel, being first matters.

"Within half-an-hour, I was live, presenting from the scene of the raid. That quick judgment was to be transformative because it helped kick-start my career in presenting. I now have my own Sunday-morning political show, Sophy Ridge on Sunday, as well as presenting other programmes for Sky News." 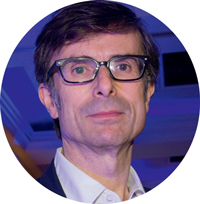 "In my world, news journalism, the best way to make a decent living is to develop a personal brand – which is another way of saying you have to stand out from the pack and people have to remember you.

"That happened for me in 1993, when I was banking editor of the Financial Times and I was investigating alleged excesses and waste at the newly created, taxpayer-funded European Bank for Reconstruction and Development.

"The breakthrough moment was a clichéd but wonderful journalistic encounter – a secret midnight rendezvous at Liverpool Street station with a banking source, who handed over a pile of confidential documents proving that tens of millions of pounds that should have been directed towards the ailing economies of eastern Europe had been spent on a totally unnecessary, enormously expensive remaking of brand new offices and lavish entertaining.

"My scoop was followed up by newspapers and TV around the world and branded as ‘Marblegate’, the EBRD boss was forced out weeks later and my reputation as a pain-in-thearse hack was made." "It’s hard to identify a single moment but there has definitely been a series of transformational relationships that have set a path for my career. The common theme is that they have all involved people I met many years before they became a defining part of my career.

"I’d credit Louise Jones for introducing me to PHD. Morag Blazey for giving me my first big break. Philippa Brown for supporting and investing in me. Fiona Parashar for guiding me. Frances Ralston-Good and Verica Djurdjevic for trusting me. And now Kathleen Saxton for believing in me.

"There is, of course, another common theme, which is that they’re all super-talented. But the lesson is to make strong connections throughout your career because they have a habit of reappearing." 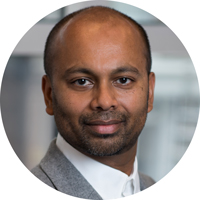 "I started as a graduate trainee at J Walter Thompson London and developed my first website for an FMCG client back in 1996 (on a dial-up connection). Four years later, I accepted an agency planning role in New York and was ready to make my move when a random opportunity presented itself to work client-side. It was not something that I had ever considered and I hadn’t imagined a life outside of creative agencies. I chose a different path.

"In 2000, I joined Adidas to be head of advertising for the EMEA region, based in Amsterdam. This entire experience was transformative. It helped me understand the nature of working in a global organisation, the cultural nuances and how to communicate ideas across borders. It taught me that advertising was only one part of a client’s business and allowed me to truly grasp how all aspects of marketing in the retail industry work together. I got to try so many different things much faster than I would have done if I’d stuck to a classic agency pathway." 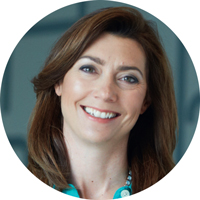 "I went on a course I was somewhat dreading. It was women only, everyone else was American and our pre-work was all about our upbringing. My British reserve was on high alert. But the lessons I learned about myself, over six years ago, I carry with me every day.

"I learned that being the youngest of four kids meant I was a natural chief executive – aged two-and-a-half, charming and delegating to get my own way and ensuring my voice was heard. Being a highly competitive swimmer as a child also shaped me because I had to be super disciplined to fit in training as well as school work – and winning felt good.

"I also learned about the need to ‘step in front of the work’ and understand and develop personal impact. It helped me feel more confident in putting more of ‘me’ into all I did professionally – the whole self, warts and all, but uniquely, authentically and powerfully me." 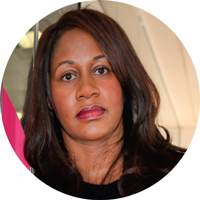 "The transformational moment in my career was becoming the UK chief executive for MediaCom back in 2010. I had huge respect for my predecessors in that role and was aware of just how daunting the job was due to the size and complexity of the agency.

"At the beginning of my tenure, our reputation wasn’t great. A lot of the senior management who had helped build the agency had moved to Group M, we received an awful Campaign school report and I personally received some damning headlines.

"I didn’t let that derail me and I was always focused on making the role my own, being authentic and not trying to emulate anyone. I really wanted to ensure people understood MediaCom and what makes us such a brilliant agency. I’m very proud of what we achieved during those five years." 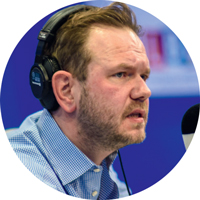 "Ordinarily, anyone writing about radio who references The Buggles’ Video Killed the Radio Star deserves to be shot. But there are exceptions to every rule and, while I wouldn’t describe myself as a radio star, it is indubitably video that has had the most transformative effect on my presenting career.

"More precisely, the decision by Global’s management to fill our studios with HD-quality cameras (which I thought was bonkers at the time) in the hope of filming ‘clips’ which would go viral brought us to the attention of millions who would previously have been unaware of my show.

"The febrile political climate of the last year or two undoubtedly helped, but when people I haven’t seen for 30 years get in touch because their Facebook feeds have been bombarded by my bonce, you know that a significant sea change has taken place." 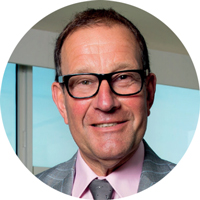 "I’ve enjoyed many fantastic moments in my career – from launching my first magazine, International Musician and Recording World, to buying Express Newspapers in 2000 to our current project, the billion-pound redevelopment of Westferry Printworks.

"Launching OK! in 1993 was one of the hardest things we’ve ever done as a company but it continues to be one of the most rewarding. And, of course, buying Channel 5, making the right investments and selling it four years later to Viacom was a fantastic adventure. Launching The Health Lottery in 2011 and giving nearly £90m to local good causes to date has also been significant.

"All these and more have been transformational. Each one has helped to shape what we have now – a future-facing and digitally focused media business that reaches one-third of the UK population every month." 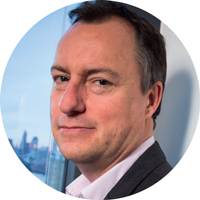 "Having blagged my way on to my first industry ski trip, standing on the top of Les Grand Montets high above Chamonix with Mark Howe, my then new boss at Flextech (who at that point still believed I could ski), and suddenly realising that not only could adrenaline be terrifying but also that bringing people with you in overcoming the biggest challenges is most rewarding and that personal development is everything."

The Lighthouse Company named headline sponsor of Campaign A List

Castree lights a fire under MEC

The three Ts: the key behind the radio breakfast show

It's time to transform how we measure media