Following its Oscar win for Best Picture, The Shape of Water can expect a surge of interest from ordinary cinemagoers, eager to experience the Academy Award winner for themselves.

For those without a statue however, driving footfall begins with a well-crafted trailer. So, how did The Shape of Water’s fellow Best Picture nominees fare?

Dunkirk, Get Out, The Post and The Darkest Hour boasted the highest takings in their opening weekends, suggesting their trailers were particularly effective at enticing audiences. We researched these four trailers by measuring second-by-second brain activity amongst a group of viewers to identify the type and strength of response elicited by each. As a result, we were able to establish which creative techniques made some of these trailers so powerful in driving audience interest, and where others came up short.

Of the four, The Post’s trailer elicited the strongest and most positive emotions, with responses indicating that people liked it and found it personally relevant.  The prominence of famous and recognisable people was a key driver; there was a peak of brain activity when Spielberg’s name appeared, for example, with Tom Hanks and Meryl Streep also eliciting very strong responses.

This wealth of talent meant that, in a short space of time, viewers received a number of cues that this was a high quality blockbuster film. Brain response was further boosted by a high level of interaction between the characters on screen - human interaction is something our brains are strongly attuned to.

The trailer for The Post also follows an intriguing narrative structure that unfolds as the trailer progresses. The different strands of the story – the newspaper, politics and people – are all closely interwoven and yet remain easy to follow.  As a result, the trailer reveals just enough away keep viewers intrigued, but not enough to give the story away and cause the brain to lose interest.

Dunkirk’s trailer also effectively employs narrative devices to keep us watching - switching between text on-screen and landscape shots sets up a pattern of repetition that is followed by the brain. However, there is no focus on individual characters until towards the end of the trailer and, even then, there a few recognisable actors, and little interaction. As a result, the story told in this trailer is less compelling for the brain than that in The Post’s.

Instead, the strength of this trailer lies in the delivery of the title credits at the end; as the word Dunkirk appears on screen, the brain understands the significance of the preceding visuals, driving a strong brain response before the trailer concludes.

Both Get Out and Darkest Hour employ some of the same creative techniques in their respective trailers; Get Out uses a repetitive pattern of visuals accompanied by emotionally charged whispers, whilst Darkest Hour elicits a strong response to the reveal of Gary Oldman as Churchill. However, neither manages to drive the same level of emotional response as The Post. Despite the compelling visuals, Get Out fails to deliver a sense of narrative development, whilst the metaphorical and literal darkness of Darkest Hour leaves viewers with a less than positive emotional take away.

However, memory response at moment of branding revealed a different story…

Emotionally, The Post worked best of the four trailers researched. However, emotional response only tells part of the story.  and, crucially, the trailer needs to ensure that the film’s name is remembered to drive footfall. When we consider this, The Post’s trailer is not as effective as if we had looked at emotion response alone. Looking at the peak levels of memory response at the moment when the film’s title appears on screen, the ranking order is the same as the ranking order for box office success: 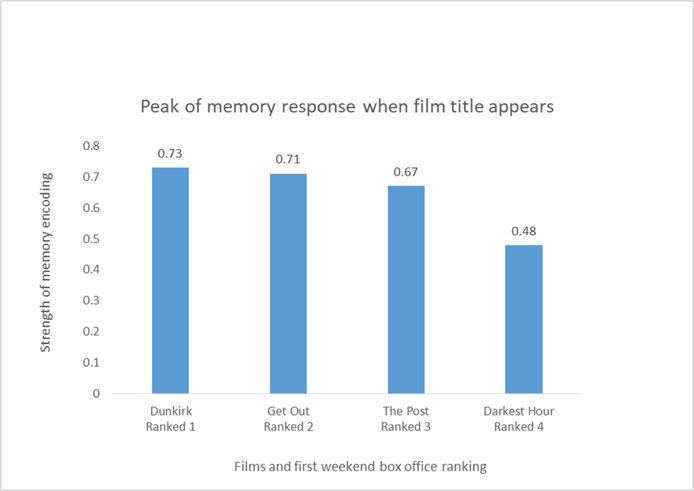 So in predicting real world impact, rather than emotional response throughout, it’s memory response at the branding moment (in this case the film’s name) that is the key predictor of market effectiveness – echoing what we see in commercials for more everyday products.

So what really matters most?

Of course, Oscars aren’t just about the most popular movie at the Box Office; nor, conversely, are first weekend’s takings indicative of the best film. But when it comes to creating all-important first impressions to drive people to a film in its early days on release, we can see that memory response at the point of branding is a key indicator, required of even the most Oscar-worthy creative.

The Gunn Report: the most creatively awarded advertising of 2017

The five most shocking launches of 2017