ITV promised significant changes to its programming line-up in 2017 but confidently asserted that the power of television was more "certain" than ever "in uncertain times" at its Upfronts Gala.

The glammed-up and celebrity-packed event at the London Palladium, the second year in a row that ITV has rolled out the pink (rather than red) carpet at the West End theatre, was always going to be difficult to match last year’s 60th anniversary spectacular.

As Kelly Williams, the managing director of commercial, and Simon Daglish, his deputy, pointed out, the Brexit vote and Donald Trump’s victory have shaken confidence.

Yet there was good reason to think ITV had a better story to tell about itself, and television, than a year ago despite jitters in the TV ad market.

"In uncertain times, you can be certain about the power of television," Williams said.

For a start, the TV commercial itself is in rude health – witness "Kelly and Dags" coming on stage with a doppelganger of Buster the Boxer from the latest hit John Lewis Christmas ad. 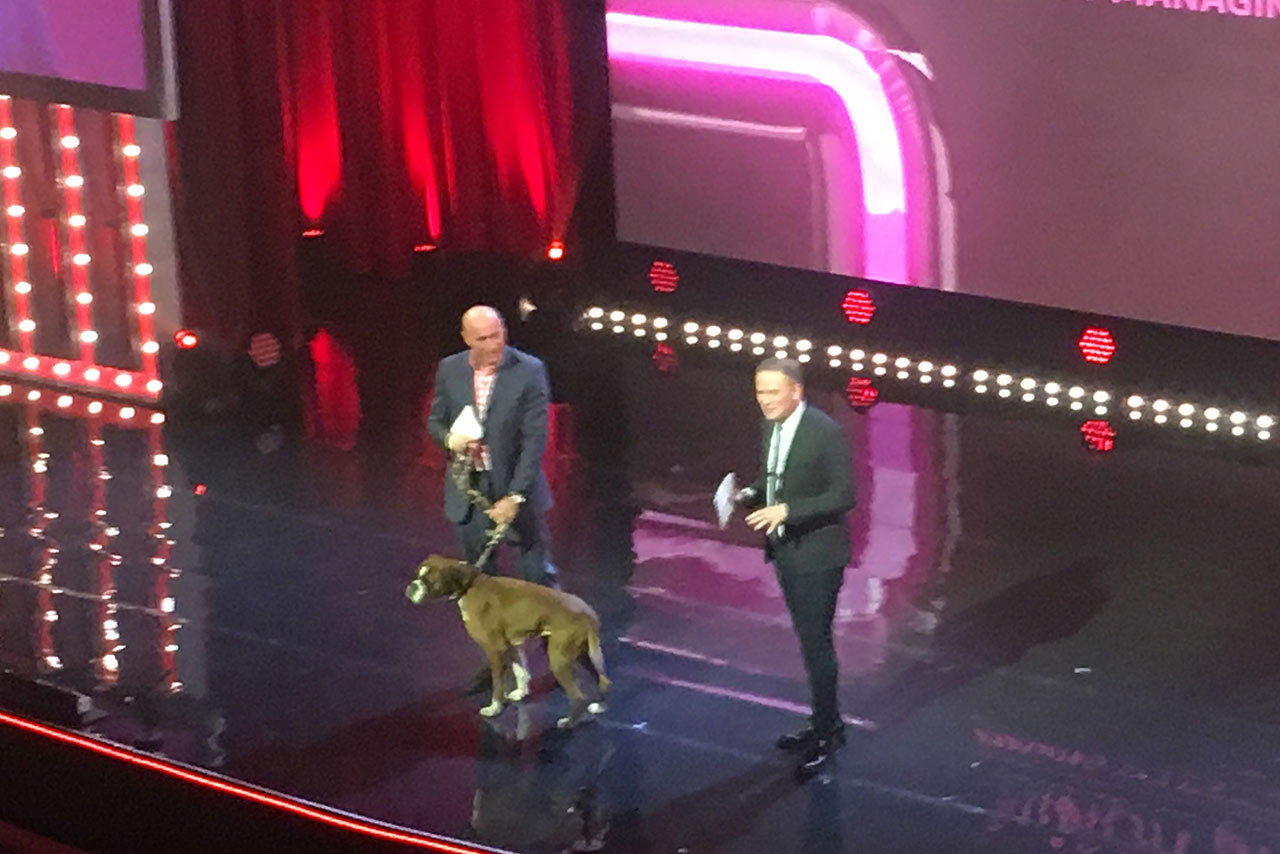 More accurately, it was Teddy, the dog seen online in a viral home video, jumping in time as he watches a TV set showing Buster bouncing on the trampoline in the ad.

"And that, ladies and gentleman, is the power of TV," Daglish said. "Two weeks ago, nobody in this room, probably in this country, had heard of Buster. It’s because of that ad and the power of TV, that we managed to get Buster so famous."

Yes, the economic outlook might be uncertain "but there’s one thing you can be certain of", he added. "If I say Honey, you say…" "G!" responded the audience of advertisers and talent, unprompted, showing they all knew the catchphrase of current X Factor competitor Honey G.

"Another demonstration of the power of TV," Daglish said, standing in front of a giant TV screen.

The budget for last night’s Gala was rumoured to be close to £1m and it showed – from a 25-piece band from the Royal Household Cavalry in full regalia to Will.i.am, joking that he was changing his name to Will.I.TV to celebrate The Voice moving from the BBC. 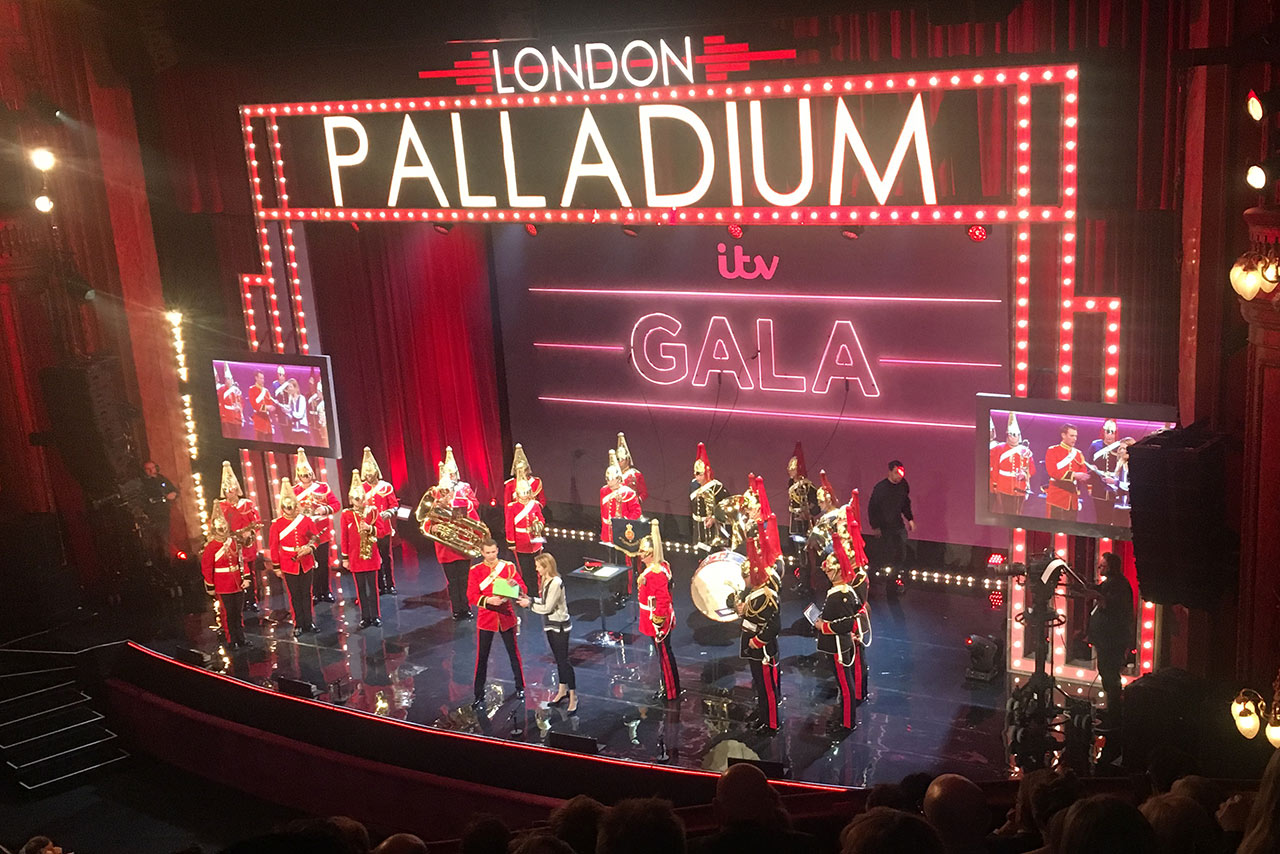 Advertisers were most interested in next year’s programming and Kevin Lygo, the director of television, showed he has put his own witty and largely assured stamp on the schedule, after taking over from long-serving Peter Fincham in Februrary.

"If I could come among you, I’d pleasure every one of you individually," Lygo told the audience.

He has decent-looking, new drama and entertainment. That ranged from Tina & Bobby (a biopic about footballer Bobby Moore and his wife, starring Michelle Keegan) and Lethal Weapon (a modern-day TV spin-off of the movie, acquired from Warner Bros in America) to Time Wasters (a comedy drama about a quartet of black musicians who get transported back in time) and The Keith and Paddy Picture Show (where Keith Lemon and Paddy McGuinness spoof big movies such as Toy Story).

Lygo is also experimenting by extending prime time past 10pm and moving the news to 10:30pm for eight weeks in favour of a new comedy entertainment and news show, fronted by a different comic each week, starting with David Walliams. The aspiration is to create something akin to James Corden’s US hit, The Late Late Show, but the slot has proved a graveyard before.

By contrast, Lygo’s plan for another weekly episode of Coronation Street may be risk-free but suggested a lack of imagination. "Disappointing" and "not the future", Mark Howley, UK chief executive of Zenith, said, while declaring the rest of the line-up looked "pretty good".

Still, Lygo impressed. His appointment has been "such a smooth transition" from the Fincham era, Jonathan Shalit, the talent manager who looks after X Factor winner Louisa Johnson, said.

Howley also liked how ITV is confronting the fact it has lost young viewers – as much as a third of 16 to 24s in the last five years or so, by his estimate – with the launch of 2Awesome, a comedy and reality programming strand on ITV2, in partnership with US online TV platform Awesomeness TV.

Williams and Daglish used the fact that the leading lights of media-buying were in one room to bust some myths and sort fact from opinion – not least the claim that young people don’t watch TV anymore.

He joked they have set up DRIVAL, the Department of Research, Investigation and Verification of Advertising Learnings, which has "looked at the validity of all of the research that YouTube has done in the last year" and would "be reporting back in 10 minutes" – a dig at YouTube’s discredited claim that advertisers should switch their TV budget to the online video platform.

ITV now has 17m registered viewers of its online TV service, The Hub – ahead of Channel 4’s All4 with 15m – making "addressable", personalised ads a viable prospect. And The Hub is now on Google Chromecast and will shortly be on Microsoft Xbox.

ITV hinted it wants to take a leadership position on behalf of TV as a whole, by guaranteeing online video ads will be "100% viewable" with "100% human traffic" and "watched through 100%" and appearing in "a 100% brand safe environment".

Daglish told media buyers: "Across 2017, both us and the rest of the TV industry will come and talk to you about what you’re actually buying."

ITV needed to come out fighting. Despite one of the best viewing performances in years for the main ITV channel, the broadcaster’s ad revenues have under-performed the market since the Brexit vote and it has had to cut 120 jobs.

This assured performance showed why it is still top dog.

Love Island: how brands made the most of the summer's smash hit

Does the upfronts season matter for UK media industry?