Brands have long been accused of reducing women, and particularly mothers, to easy stereotypes. We investigate how mums are changing, and to what extent marketers are altering their thinking.

Yet few brands are getting it right, according to Kraft's vice-president of global media and consumer engagement, Bonin Bough, at the Cannes Festival of Creativity earlier this year. He called on brands to 'reset the way we think about mums' in response to research from Yahoo! and Starcom MediaVest, highlighting how technology is changing the way mothers, in particular, think and behave.

So why do so many brands get it wrong? The biggest complaint mothers have is that brands do not market to the 'whole person', only the 'mum' (see below). A plethora of research commissioned by agencies keen to understand the market shows mothers feel shoehorned into outdated stereotypes.

As Justine Roberts (pictured), co-founder of parenting site Mumsnet, says, just because a mother is at home, that doesn't mean she's obsessed with cupcakes and cleaning. Similarly, just because another works outside the home, that doesn't mean she spends her life craving 'me time'. Modern motherhood has many facets, with 'mum the creative blogger', 'mum the kitchen-table entrepreneur' and 'mum the skilled socialite' just three characterisations with a basis in reality.

Roberts believes it's dangerous territory to hook a marketing campaign on a universal experience of motherhood. 'Most parents I know share only one characteristic: they're knackered most of the time,' she says. 'The idea that mothers are only interested in getting their whites whiter doesn't resonate with the Mumsnet audience, which is very diverse. Brands need to talk up, not down, to women. They should not make assumptions about their lives, likes and opinions, but be part of the conversation. Be useful, engaging and entertaining; do not pigeonhole or patronise.' 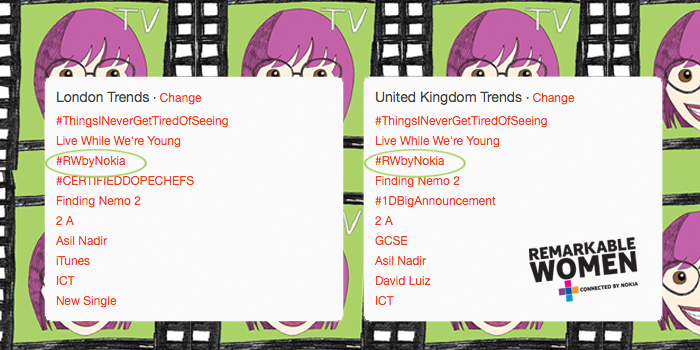 When mum-of-two Belinda Parmar was buying a mobile phone two years ago, retailers failed miserably on all these counts and inspired her to set up award-winning agency Lady Geek. It exists to campaign against what she calls the 'pink it and shrink it' approach to women, particularly working with technology and gaming brands such as Xbox, Nokia and Vodafone.

She masterminded Nokia's 'Remarkable Women' campaign, fronted by inspirational women succeeding in male-dominated areas, from beat-boxing to web programming. Bringing these 50 women together in a room for an hour, their conversations, photos and videos are broadcast via Twitter, using the Nokia Lumia device's technology.

'We're celebrating these women and the phone is an enabler,' says Parmar. 'We've had 1.2m followers on Twitter and the "party" trended highly. That's down to the power of the female network. But the problem is that the people making the marketing decisions at brands are often men and they get it terribly wrong - like Dell with its "Della" website for women and HTC's Rhyme phone.'

The game-changing product for marketing to this important and potentially lucrative female market is, indeed, the smartphone. By being a gateway to the world, these devices give brands the opportunity to acknowledge the multifaceted nature of the modern mum.

Unlike Twitter, which has a skewed AB1 audience, the smartphone crosses socioeconomic divides, with many mums choosing it over a PC internet connection to save money. Pregnancy and parenting site BabyCentre's research shows, in fact, that motherhood is a trigger for smartphone adoption, with more than a third of respondents (36%) saying they purchased one as a result of having children.

There is another recent shift in mindset that brands would do well to take on board, particularly in the tone of voice they use. Whereas research once showed that mums often viewed themselves as desperate 'jugglers', rushing from one role to the next, weighed down by guilt, there is growing evidence to suggest this is changing. Technology is enabling her to better integrate different aspects of her life and personality, empowering her and making her feel more confident.

'Overall, technology helps more than it hinders,' says Mike Fogarty, senior vice-president and global publisher at BabyCentre. 'The thing we hear most is that it helps mums be with their children. True, they might not be fully engaged with their son playing with blocks on the floor because they're also on their smartphone, but they are increasingly thinking "At least I am here. If not for this phone, I wouldn't be." Marketers need to understand mums are using the phone to get jobs done concurrently. They need to ask: where is she now? How is she behaving? How is she feeling? How can my brand fit in and make a positive difference? They also need to be everywhere that she is.'

With mobile changing marketing so fast, some brands are not geared up to reach mothers effectively. Siobhan Freegard, co-founder of Netmums, finds when working with an advertiser that she is often speaking to two different teams, one mobile and one digital, which can lead to inconsistencies. 'The budgets for mobile and digital are often split,' she says. 'Very soon that will have to change. It's more important to remember who you are talking to than how they are accessing you.'

With time saved and armed with their new-found confidence, mums are participating in conversations with brands more. This is what brands say they want, but in reality many retreat from conversations they would rather not have. Many brands, says Freegard, still take a reactive, defensive position.

A handful of braver brands have initiated conversations on Netmums on topics that they have veered away from in the past. Kellogg, for instance, opened the debate on sugary cereals. According to Freegard, the then-UK managing director, Greg Peterson, started talking to Netmums directly, while surrounded by marketers and agencies. He got a chance to explain the evolution of the cereal and the way ever-more sugary ingredients, such as marshmallows and chocolate, were added over time. He had the chance to say: 'We accept, along with you, that it's gone too far and we are looking at how to pull it back.'

Mums are cottoning on to their power and, according to Sally Whittle, founder of blogger directory Tots 100, they are often asking for bigger incentives to work with brands. This is reflected in the fact that mums want to make money from blogging. 'For some it's an important way to generate extra income to help ends meet. Around 65% of our blogs now make some money and 90% would like to,' says Whittle.

Lynne Barcoe, founder of consultancy MumPanel, has also detected this trend. However, she feels that the importance of bloggers, and online mums in general, is often over-egged. She warns there is a danger that brands get lost in the hype, giving too much credence to new channels and technology.

'Some brands focus far too much on PR and mummy-bloggers, thinking that is the way to form a "grass-roots strategy",' she says. 'Yes, that's part of it, but there is not one "mummy medium". There is no quick win to "planet mum". Not all mums engage via smartphones or Twitter or Facebook, that's why we make such an effort to get out into the community to speak to them face-to-face too.'

Fruity malt loaf brand Soreen, a MumPanel client, is convinced that face-to-face research can reap insights impossible to achieve online. 'We like to be seen out and about by mums when we're doing events and sampling,' says Katherine Collins (pictured), marketing manager at Soreen, which recently used MumPanel to help develop its new Lunchbox Loaves product.

'Face-to-face feedback at coffee mornings and groups is really valuable,' she adds. 'Not only can you listen to them in person, but you can see how they engage with your product, how their children engage and also see pester power in action.'

Another important emerging trend, also cited by Bough at Cannes, was the idea taking hold that women want to define meaning in their motherhood. There's a growing sense of purpose and value being applied to the job of mothering, with some agencies now talking about mothers as 'CEO' or 'family visionary'. Importantly, in a world where motherhood is so diverse, this trend also appears to unite stay-at-home and career mums, who have traditionally been characterised as having a tense relationship.

As McCann's 'The Truth About Mums' (July 2012) report shows, the mum-as-chief-executive's main mission is family happiness. Laura Simpson, global director of McCann Truth Central, believes that brands need to understand this trend as a zeitgeist.

'The economic battering and corporate scandals of the past few years seem to have contributed to a shift in the goals mums have for their children,' she says. 'Whereas mothers have long been hyper-focused on the material success of their children, today's mums appear to be unified by one simple value: they want to raise happy kids.'

Sarah Day, marketing manager of the Seven Seas supplements pregnancy range, is 21 weeks pregnant. 'How would I describe the marketing targeting me as a mum-to-be? It's a deluge. Every morning I hear the 'ping, ping, ping' of my email receiving messages pushed to me from advertisers. I have at least five or six every day. I've noticed it has really peaked recently.

'As a marketer I feel very conflicted about it. It's very bittersweet. I'm 50% interested, because I quite like looking at the information and thinking about what is happening. I feel quite indulged that brands are talking to me. But then, I'm 50% annoyed. I know they're just trying to sell me things. At Seven Seas, we're trying to have a conversation with women, but I don't feel that's happening with the brands targeting me at all. I feel I'm being pigeonholed.

'Arguably, sending me an email at 21 weeks is one of the most targeted marketing messages I'll ever get, but it feels generic. I'm marketed to as "21 weeks", rather than "Sarah Day". I want to be defined by being pregnant, but I'm still a career woman. I feel like saying "Don't put me in this yummy-mummy box." I just want to be me. I don't feel the brands are talking to me.'

PZ Cussons launched a campaign for its Mum & Me baby range in August, focusing on the 'ups and downs' of parenting and how the brand can help. Created in collaboration with 1200 mums, it aims to provide a non-judgemental source of online information for modern mums.

Help with the practicalities

An abundance of free apps aims to do this. One is baby-food brand Plum's weaning app. This gives parents tips via 'The Life Guide', a crowd-sourced 'weaning bible'. The NCT has an app to help find baby-changing facilities, while the British Toy & Hobby Association has one for parents at a loss for play inspiration.

Savvy mums are using price-comparison and discount vouchers apps like Pricerunner to seek out the best deals. A huge 72% say they look online for money-saving deals and 28% use their phone.

Two-thirds of families say their incomes are down on this time last year, forcing mums to become brand-disloyal to stretch budgets, with nine in 10 open to trying new ones. Own-label food sales rose 14% in the past year, while discount clothes chain Primark's sales leapt 16%.

Blogging, message boards, tweeting and Facebook have made it easier for mums to recommend brands and spread their personal influence to a global audience. A significant 55% are more likely to buy if others have recommended a product online, and 89% check the web for brand information and discounts.

Mums are shunning traditional media to get instantly updated advice on caring for kids. Just half read a local paper and just 12% listen to local radio - and only one in 20 still uses local A-to-Z guides.

Mums make four in five family purchasing decisions and 98% play an active role in their family finances. If you want to influence family spending, talk to mum.

Reigniting the debate around women in marketing