The quality of Three's recent campaigns is testament to a client-agency relationship that is locked in step, writes Richard Huntington, chief strategy officer at Saatchi & Saatchi.

Some agencies and clients are just made for each other. By which I mean, they seem to get one another, and the result is confident work and a confident brand - partnerships such as The Economist and Abbott Mead Vickers BBDO, Audi and BBH and more recently John Lewis and Adam & Eve/DDB.

And so it is with Three and Wieden & Kennedy. You don't get away with a CGI Shetland pony dancing its fetlocks off to a Fleetwood Mac floor-filler without a client and agency relationship that is locked in step. A relationship in which there is a heap of mutual trust within a team with real empathy for the brand. Testament to this success is the fact that I have no idea which agency worked for Three before Wieden, and no recollection of any of its work.

But it's not just the brand fluff that it excels at. It is pretty tasty with the harder-working communications that land Three's propositions, too. Like this month's resident of the second spot in the Adwatch likeability table: the TV commercial for its #holidayspam campaign.

Here's the deal: Three has decided that data should cost no extra when its customers are on holiday in any of 16 selected countries. It's a top proposition, albeit that Three has cannily avoided most of the places that Brits tend to actually like going on their hols - Israel is currently a war zone and Denmark's only attraction is a statue of a diminutive mermaid.

To bring this to life, Wieden has found a neat creative insight that it's only the cost of using data abroad that stops all manner of horrendous holiday spam gracing our news feeds, courtesy of friends enjoying the beaches of Finland or wherever else. So Three is apologising to Britain for the irritation that this is likely to cause.

It's not the most slickly executed campaign, especially in comparison with the brand spots, and, frankly, the outdoor and digital elements, such as the Holiday Spam Crisis Centre, are stronger than the TV. But this work delivers the business proposition like a sledgehammer. In a mobile market where you can run around the streets naked shouting "everything free forever" and people would ignore you, that's no mean feat.

So, all in all, a nice proposition, a sharp insight and decent work from what appears to be a very tight client and agency team. And thank God it is so tight, since Three is going to need all the help it can get from Wieden as 4G becomes standard issue. 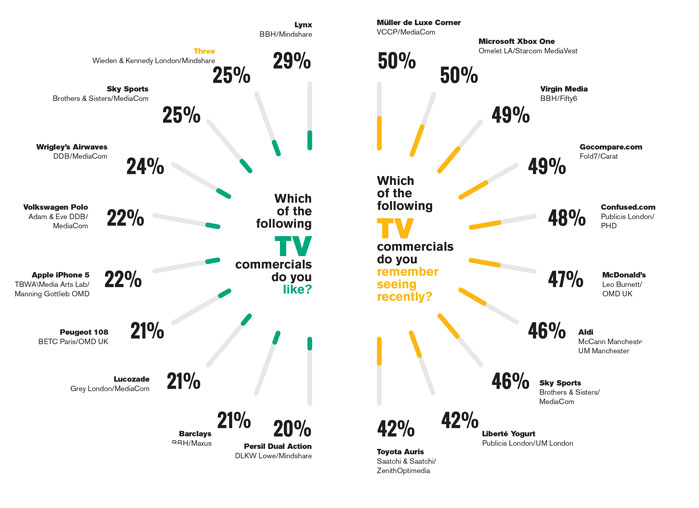 Has Burberry's personalisation drive brought the brand closer to consumers?

Top 10 ads of the week: Muller tantalises our tastebuds and brain boxes

Top 10 ads of the week: Barclays and Google share the top spot