Here’s a list of my favourite things to do at work:

Here’s a list of my least favourite things to do at work:

It’s a shorter list, but sadly the one I spend far too much time focussing on.

In recent times, the dubious research faucet has been sponsored by YouTube. It has been leaking all over the industry.

First, we had the entirely disinterested 'give us a large chunk of the money you spend on TV' research.

Next came the 'we’re better than TV if you take a very narrow view of the situation' study.

And last week we were blessed with the "let’s compare all of YouTube on mobile with the reach of a single TV channel because that is a comparison we can win, regardless of it not meaning anything much" project.

We’ve decided to take all these studies as backhanded compliments from YouTube to TV. They obviously love TV so much they can’t resist continually comparing themselves to it.

And we hate to quibble, but the latest findings do raise eyebrows – some of which hadn’t been lowered since the last YouTube research. Might need Botox to get them back down. Here’s our take:

It is not news that YouTube is popular with young people. So is TV. But TV and YouTube fulfil different roles in their lives. You can read all about it here. In real life they happily co-exist; any disharmony exists solely in YouTube’s press releases.

YouTube’s latest claims are obviously for the benefit of advertisers, but let’s examine the advertising opportunity closely.   0.6% of video advertising is seen on YouTube; 94% is seen on TV, in full and with sound.

For 16-24s that rises to 1.4% versus TV’s 87.6%.  YouTube could deliver more advertising if it monetised its long tail or stopped offering Trueview skippable ads. The fact that 80% of YouTube’s viewing is done by 20% of viewers also hampers their reach potential for advertisers.

And claiming YouTube on mobile reaches more young people than an individual commercial TV channel could prove to be true but it is an entirely one dimensional comparison. It is like comparing a metre of gold chain with a cubed yard of solid gold. It ignores the fact that they spend vast amounts more time watching TV, and so deeply engaged with TV they talk and tweet about it.  It also ignores the fact that TV advertisers plan and buy across all TV, not just one specific channel.

As for its claim that people go to YouTube for content they’re passionate about – yes, of course they do. It’s good at that. And TV is often the source of what people passionately want to watch on YouTube, like those James Corden Carpool clips that YouTube so loves to claim credit for.  They do also go to YouTube because they’re bored at the bus-stop and idly clicked on a Buzzfeed link.

Below are three charts you might find useful which also use BARB and Comscore data in addition to IPA Touchpoints, another robust and impartial source.

Coming up next: Thinkbox compares total TV reach and volume for 18-34s to any single individual YouTube channel.

Obviously not, that would be ridiculous. 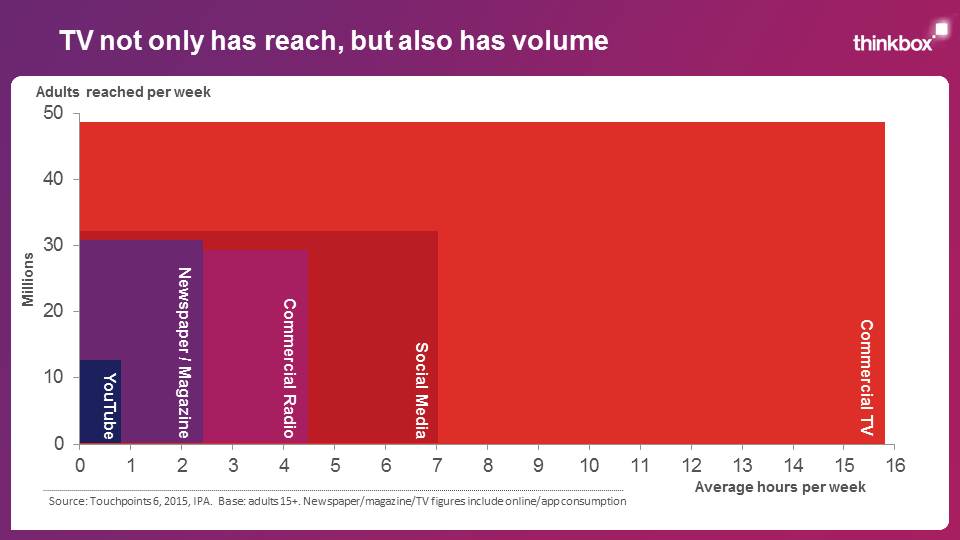 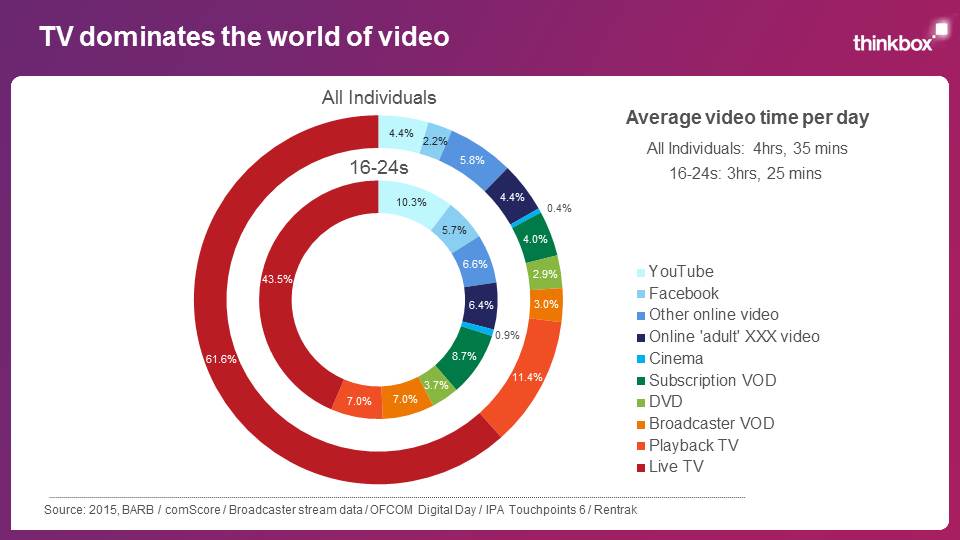 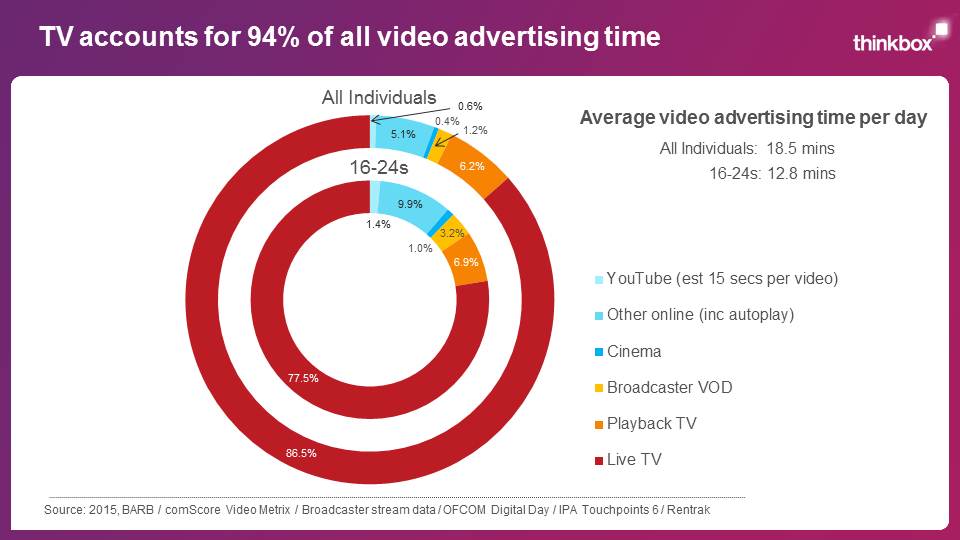 Thinkbox: We're not looking for a fight with YouTube

Thinkbox/YouTube spat is the start of an epic battle