Cash-free checkouts, customised playlists and a fresh orange juice machine are among features Tesco is testing in the first store it has opened within its head office in Welwyn Garden City.

The Tesco Express is part of the Heart Building, which opened last month and brings together testing kitchens, meeting and event spaces and other facilities designed to support a working culture in which staff from all teams are more actively involved in innovation.

The store, which is open to the public, is the first Tesco to be entirely cash-free. The idea was prompted by "a huge trend of the number of people paying by cash deteriorating year by year," Steven Blair, Tesco’s convenience transformation director, said – with around 85% of transactions in some stores now being electronic. 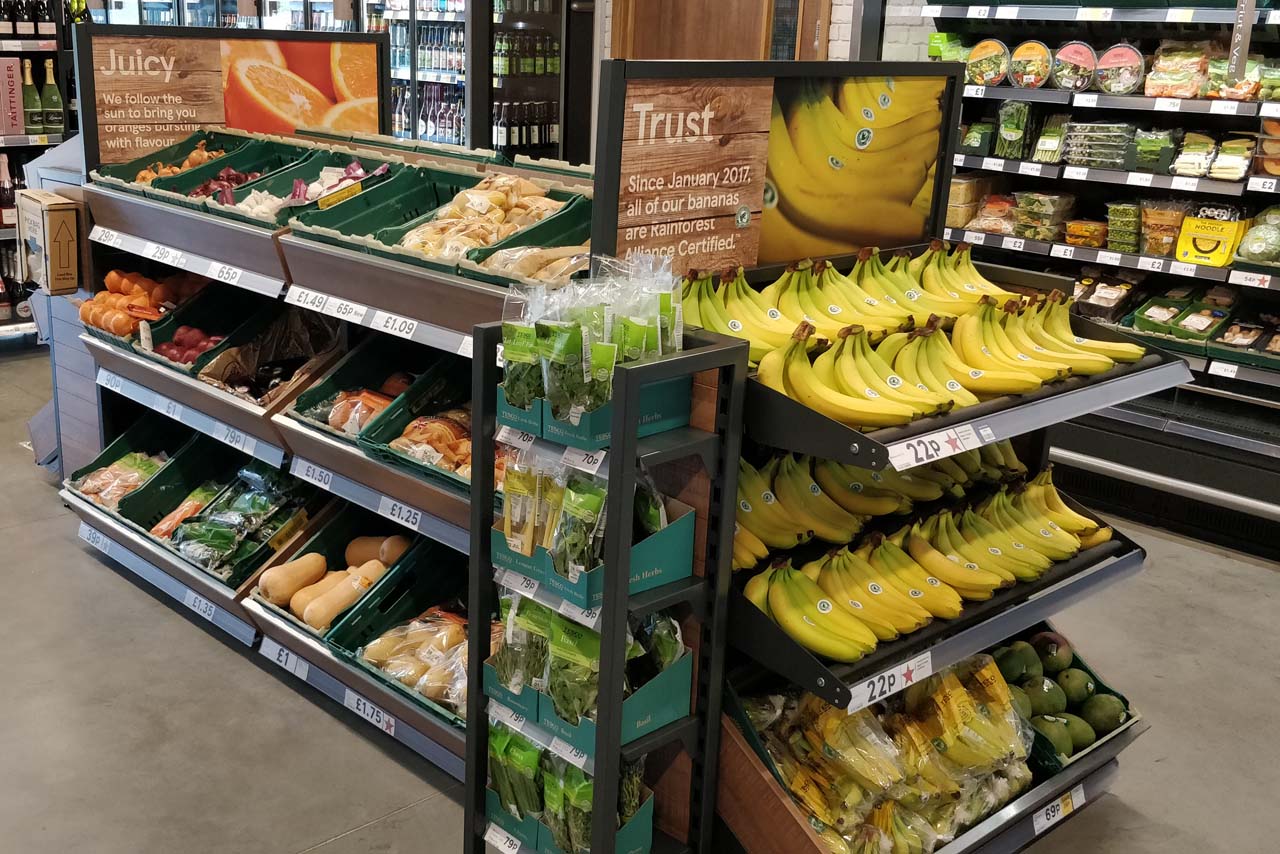 The system had allowed the speed of the average transaction in the store to be halved from 90 seconds to 45, Blair said.

He added that a small number of staff were also testing an app-based solution that would allow a user to complete a shop without visiting a checkout: "You’ll be able to come in, select the products you want, pay for them and just walk out." 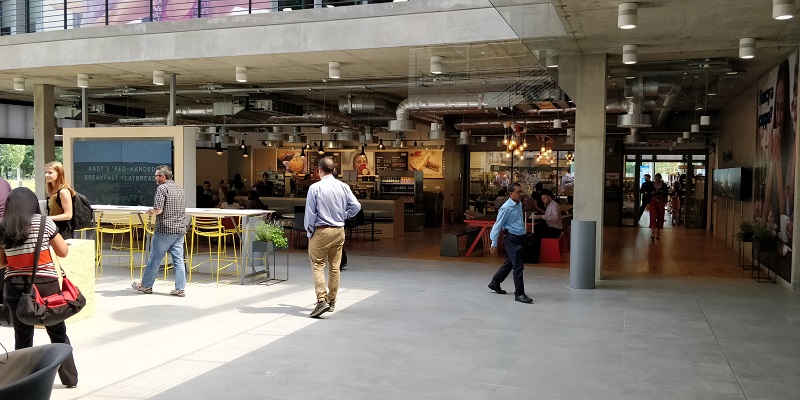 While he said this was in its early stages, it shows that Amazon Go-style shopping could be available in Tesco stores before too long.

Another feature being tested in this, and 30 other Express stores, is the use of a music playlist based on Dunnhumby data about the profile of shoppers in the particular store. "We serve very different catchments," Blair said. "We have extreme student stores, very elderly areas, stores next to schools, stores in urban areas." 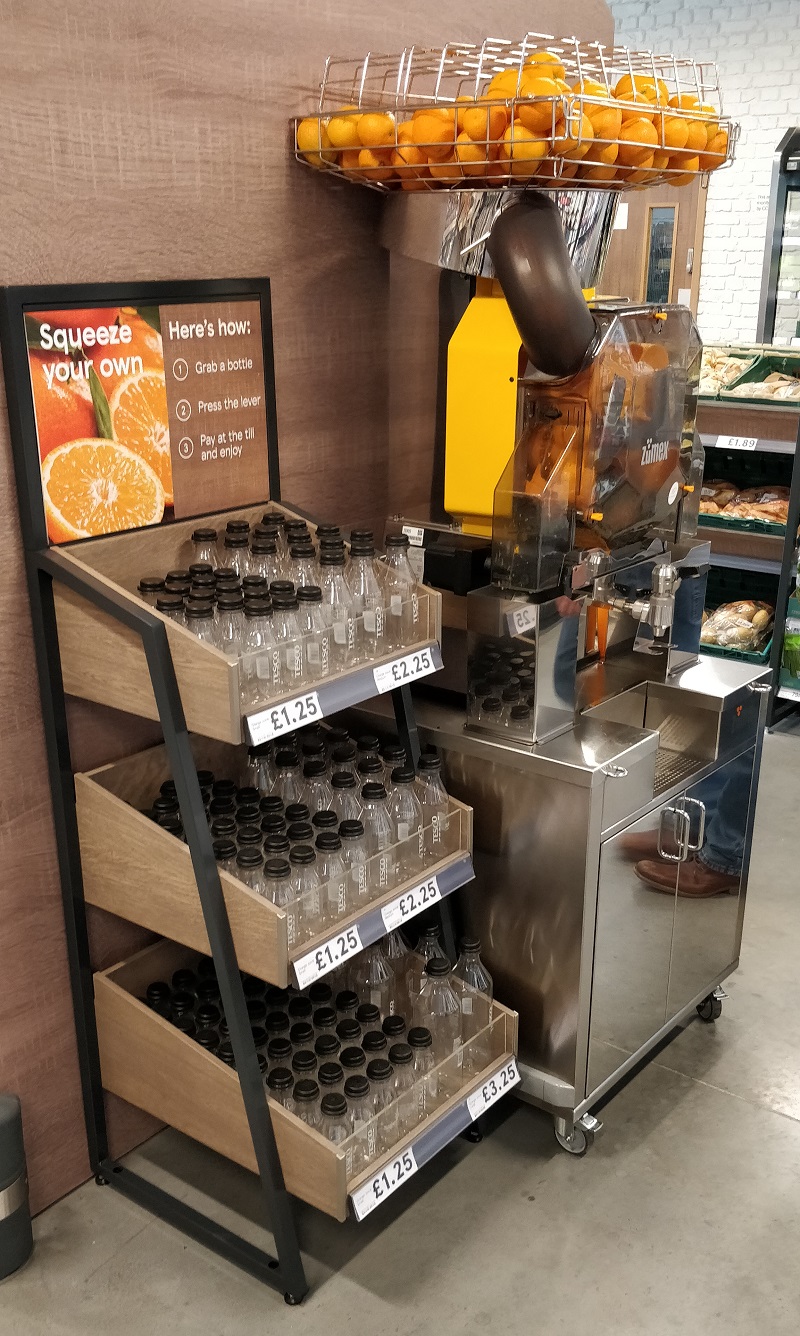 The store also features an atypical layout and design. Products are grouped together in a way designed to speed up visits, such as placing fresh meat together with relevant cooking ingredients.

Along with the cashless checkouts, this approach was important, Blair said, because the two main considerations shoppers had about convenience stores were "Is it convenient for me to get to, and can I get in and out of there quickly?"

There is more prominence for fresh produce, flowers and baked goods – all areas Blair said had a "disproportionate impact on the brand". There is also a large fresh orange juice machine (right), which Blair said was inspired by a growing trend in other European countries.

The Heart Building is also designed to support efforts by Tesco to cut down on food waste, which occurs at every stage from the farm to the home.

In May, the retailer removed "best before" dates on 70 of its fruit and veg products to encourage consumers to throw away less food. It has also started selling green lemons for the first time, which have had less time to ripen on the plant and stay fresh for longer. 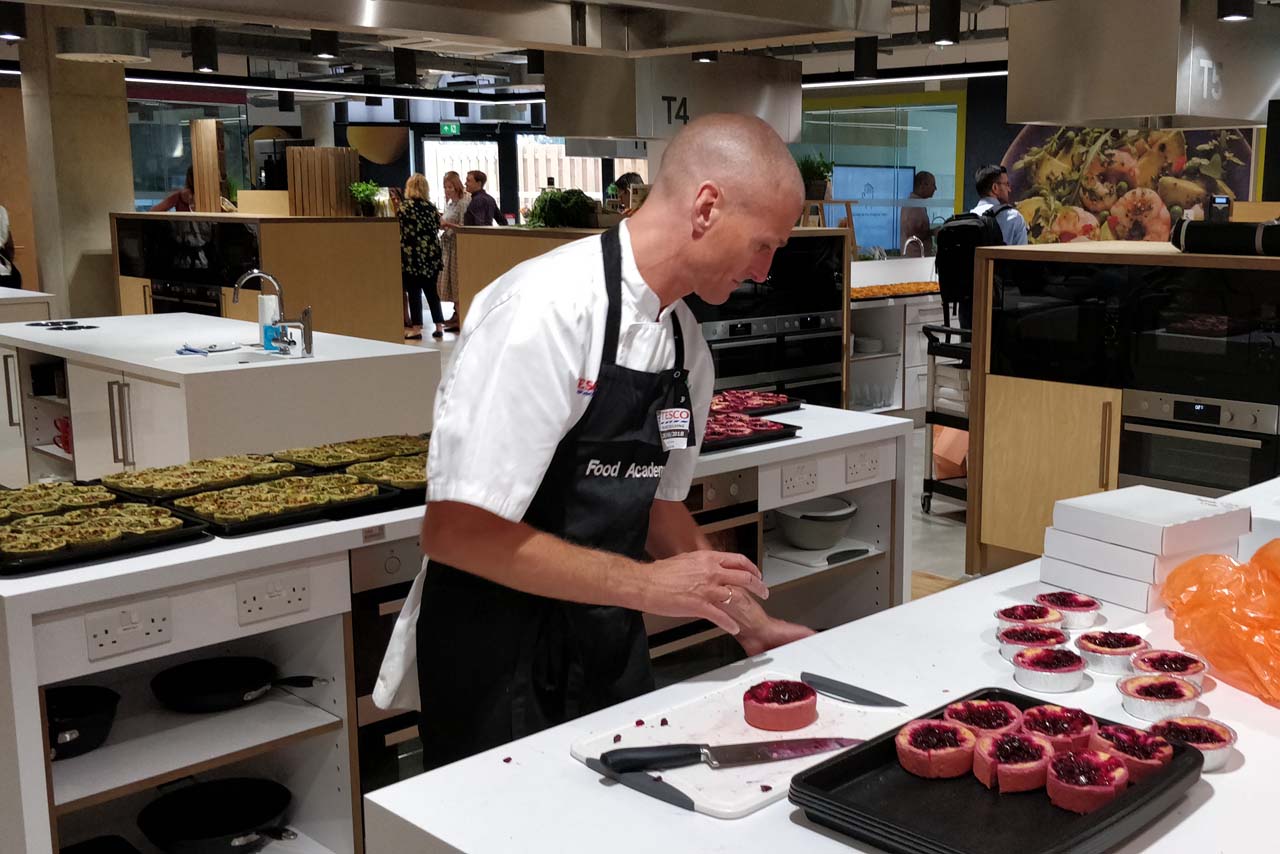 A cook in the testing kitchen

But Martyn Lee, executive chef – product development at Tesco, is also focusing on ways that food that would otherwise have been wasted in production can be turned into innovative products. These are tested among staff at the building’s restaurant, with the intention being to progress the best ideas to product development.

Speaking to journalists at a lunch prepared by Lee using various waste ingredients, chief executive Dave Lewis said: "The idea is to develop things here, serve it in that restaurant to colleagues, get the feedback as to how people think about it, and then we can put that in the shop here." 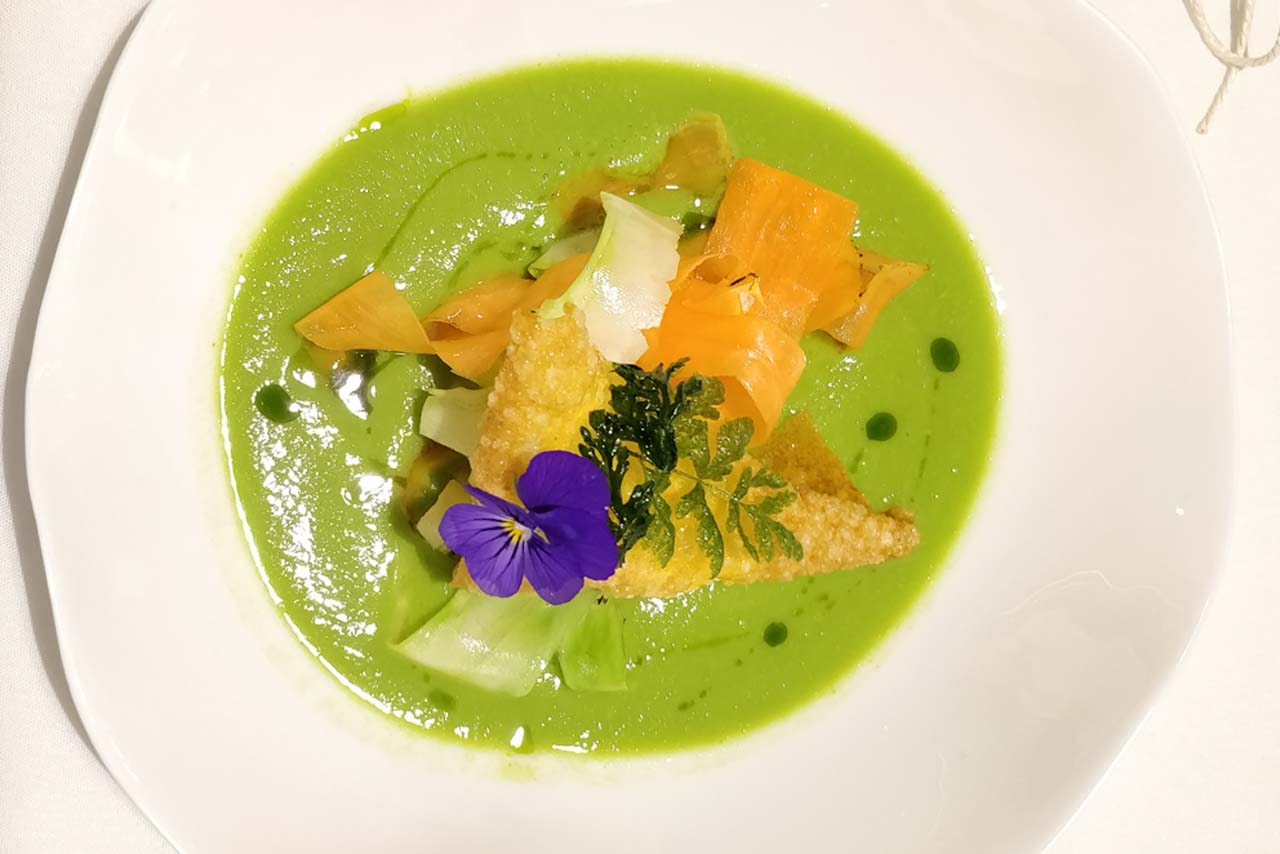 One recipe that has become popular is a "marmalade and toast porridge", which uses the leftover orange peel from the juicer in the store, and toasted breadcrumbs from leftover bread.

Lewis was asked about the planned merger of Sainsbury’s and Asda.

"If you look at the history of [Competition and Markets Authority] judgements, it won’t be straightforward, but we’ll have to wait and see," he said.

But Lewis dismissed the idea that Tesco’s recent acquisition of wholesaler Booker made the deal more likely to go through: "The people that read across from Booker and Tesco to Asda and Sainsbury’s clearly don’t understand anything about competition law."

Tesco's Dave Lewis: it's the right time to invest in advertising

Loyalty schemes do need to evolve but Amazon Prime isn't the answer for Tesco. So, what is?